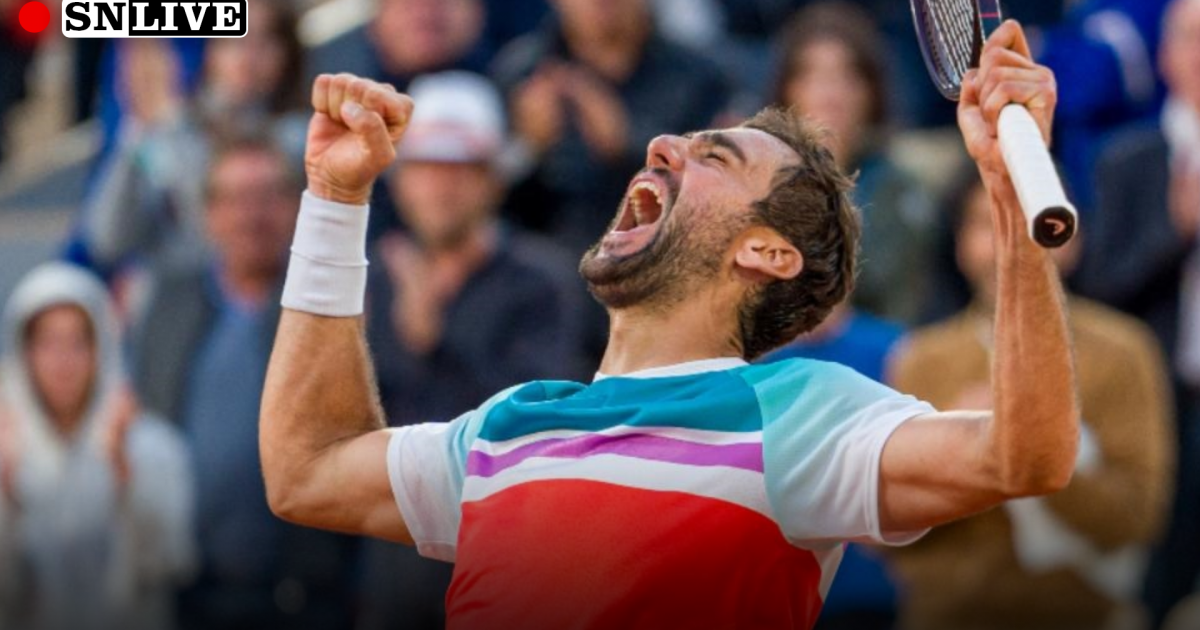 Casper Ruud and Marin Cilic will clash in the 2022 French Open semifinal with the winner set to face Rafael Nadal in Sunday’s final.

Ruud has achieved his best ever performance at a grand slam by making the final four at Roland-Garros but wants to take another step forward into his first major final.

Meanwhile, Cilic is targeting his second major title after winning the US Open in 2014. However, the Croatian had only ever made it as far as the quarterfinals at the French Open before this year.

The last eight saw Ruud see off Holger Rune in an ill-tempered match that went to four sets. The Norwegian also achieved an impressive win over Hubert Hurkacz in the fourth round.

MORE: Why Rafael Nadal will win the 2022 French Open

Cilic needed five sets to get the better of Andrey Rublev in the quarterfinals. However, the 33-year-old’s most impressive performance came in the fourth round when he dispatched Daniil Medvedev in straight sets.

Follow The Sporting News’ live commentary of the 2022 French Open below. All times in BST.

GAME, SET, MATCH – RUUD! RUUD 3-6, 6-4, 6-2, 6-2 CILIC: A love hold and an ace to seal it! What a performance by Ruud who will face Nadal in Sunday’s French Open final. The Norwegian was unstoppable after dropping the opening set. Cilic fell out of the contest in the end, but he had an excellent tournament as well!

*RUUD 5-2 CILIC (3-6, 6-4, 6-2): Cilic has asked the question and Ruud will have to serve it out. Will the Norwegian be able to hold his nerve? He has been unshakable since the opening set.

RUUD 5-1 CILIC* (3-6, 6-4, 6-2): One game away! Incredible serving from Ruud there and he’s just four points away from his first ever Grand Slam final! The Norwegian is seeing the ball so big. He’s striking the ball so cleanly.

*RUUD 4-1 CILIC (3-6, 6-4, 6-2): Double break! This one might be over. There are just too many errors coming from the racquet of Cilic who looks despondent as he sits down at the change of ends. Ruud is now just two games away from a meeting with Nadal in the final!

Looking like another one of those Norwegian-Spanish Grand Slam finals

RUUD 3-1 CILIC* (3-6, 6-4, 6-2): There’s not a great deal happening for Cilic against the Ruud serve at the moment. The Norwegian is giving Cilic nothing. A love hold and Ruud moves one game closer to his first Grand Slam final.

RUUD 2-0 CILIC* (3-6, 6-4, 6-2): This serving from Ruud in the second, third and so far in the fourth set has been incredible. We all expected Cilic to be the one leading the ace counter, but that hasn’t been the case!

*RUUD 1-0 CILIC (3-6, 6-4, 6-2): Break! Ruud gets the break early in the fourth set. He clinches break point with a brilliant winner and it very much feels like the Norwegian has Cilic figured out. He can’t think about the finish line yet, though!

THIRD SET, RUUD! RUUD 6-2 CILIC (3-6, 6-4): Ruud is now just a set away from his first ever Grand Slam final. The Norwegian did well to handle the stoppage in play and by the looks of it hasn’t allowed it to affect his game. A lot of work for Cilic to get back into this one.

RUUD 5-1 CILIC* (3-6, 6-4): Play has resumed and that’s a huge hold for Ruud who looked a bit unsettled at the start of that service game. Cilic had two break points at 15-40, but the Norwegian won the next four points to hold.

PLAY IS STOPPED! A protestor has made her way on to the court and so play has been stopped for the time being. The players are being led to the locker room.

*RUUD 4-1 CILIC (3-6, 6-4): A quick hold for Cilic, but it might not matter with regards to the outcome of this set. Instead, the remaining few games of this set might be about building momentum for the start of the fourth set.

RUUD 4-0 CILIC* (3-6, 6-4): Cilic is very unsettled right now. He’s arguing with his box as Ruud just presses on and consolidates the double break. Cilic might now be thinking about the fourth set already!

The momentum is with the 🇳🇴 at the moment.@CasperRuud98 | #RolandGarros pic.twitter.com/G3N9s13F0B

*RUUD 3-0 CILIC (3-6, 6-4): Double break! Stunning chipped, cross-court drop-shot winner from Ruud to clinch a break point at the third attempt in that game and Cilic is at risk of being left behind in this match!

RUUD 2-0 CILIC* (3-6, 6-4): A love hold for Ruud who secures the game with yet another ace. This is where the biggest improvement has occurred since the opening set – the Norwegian is serving really well!

*RUUD 1-0 CILIC (3-6, 6-4): Break! Ruud certainly has the momentum at the moment and he has broken right at the start of the third set. This overhead smash thing is becoming a real issue for Cilic! There was another botched one on break point there.

SECOND SET, RUUD! RUUD 6-4 CILIC (3-6): What a way to finish it! Ruud faced three break points against his serve, but saved them all and then produced two stunning winners to close out the set. We’re back on level terms in this French Open semifinal!

All square….@CasperRuud98 strikes back, taking the second set 6-4#RolandGarros pic.twitter.com/3WKHRsLSz4

*RUUD 5-4 CILIC (3-6): A love hold from Cilic and Ruud will have the opportunity to serve out this second set and level up the match at 1-1.

*RUUD 4-3 CILIC (3-6): Good hold from Cilic who constructed some really nice points in that service game. He stays within touching distance of Ruud in this second set.

RUUD 4-2 CILIC* (3-6): Good serving from Ruud who is doing much better on the backhand side. Cilic was attacking that side in the first set and forcing Ruud into corners and areas he didn’t want to be in.

*RUUD 3-2 CILIC (3-6): Cilic stays in touch in this second set, although there was still a careless smash from him in that service game. As well as the Croatian has played, his overheads have been poor. Which is strange because he’s usually very good at them!

Minutes since Marin Cilic’s last smash missed into the net:

RUUD 3-1 CILIC* (3-6): Ruud consolidates the break to put some daylight between him and Cilic in this second set. There was a wonderful drop shot from the back of the court from the Norwegian in that game.

*RUUD 2-1 CILIC (3-6): Break! There wasn’t much sense that Cilic was under pressure on his own serve, but the Croatian made one too many errors in that game and Ruud edges ahead in this second set.

RUUD 1-1 CILIC* (3-6): A big hold for Ruud who faced some pressure from Cilic at 40-40, but the Norwegian gets on the board nice and early at the start of the second set.

*RUUD 0-1 CILIC (3-6): A love hold from Cilic to start this second set. This upcoming game for Ruud is huge. Cilic has the momentum and Ruud can’t allow the Croatian to break early in the second set.

FIRST SET, CILIC! RUUD 3-6 CILIC: Cilic takes the set with a brilliant inside-out forehand winner and there’s a sense the Croatian is really coming to the boil now. What sort of response will Ruud have? He’s been competitive, but hasn’t been able to win the biggest points so far.

*RUUD 3-5 CILIC: Three games in-a-row for Cilic. Ruud had a break point in that game after a couple of poor errors by Cilic, but the Norwegian still can’t make the most of these opportunities. He will now serve to stay in the first set.

RUUD 3-4 CILIC*: Break! Cilic draws blood first and does so with a cross-court winner from a Ruud second serve. The Croatian has the greater experience in these sort of situations and he’s settling into the match.

*RUUD 3-3 CILIC: Another shaky overhead from Cilic in that game, but his serving has been so good over the course of this tournament so far that it gives him such an advantage even when he is searching for his best tennis.

RUUD 2-3 CILIC*: There was an opportunity there for Cilic to break, but Ruud tightened up and keeps the scoreboard ticking over. It’s been a good start by the Norwegian. Cilic looks the edgier of the two players so far.

*RUUD 2-2 CILIC: Cilic made three bad errors in that game including two double faults, but made good use of his serve to get out of trouble and keeps his serve at the start of this opening set.

RUUD 2-1 CILIC*: Ruud is already making good use of that backhand and has secured two comfortable holds to start this match.

Who will be the second finalist of the day? 👇

*RUUD 1-1 CILIC: Cilic responds with a love hold of his own in his opening service game of the match. The Croatian has been serving so well in this tournament. Ruud might find it very difficult to break him today.

RUUD 1-0 CILIC*: A solid start by Ruud who has been very impressive over the course of the last two weeks. The Norwegian is very strong on clay.

18:00: The two players are out on court. Ruud is aiming to reach his first Grand Slam final while Cilic is looking to reach another major final – he has played in the final of the Australian and US Opens as well as Wimbledon!

17:45: There is still shock around Roland Garros after the horrible ending to the semifinal between Nadal and Alexander Zverev. It will be a new crowd inside Philippe Chatrier for this match, but nonetheless it might take some time for the fans to warm up.

Who will make their first @rolandgarros Final? 🤔 pic.twitter.com/vFCmpsCbjg

17:30: Good afternoon and welcome to The Sporting News’ live commentary of the French Open semifinal between Casper Ruud and Marin Cilic. This is a golden opportunity for both players to make a Grand Slam final with Rafael Nadal waiting to face the winner of this semifinal.