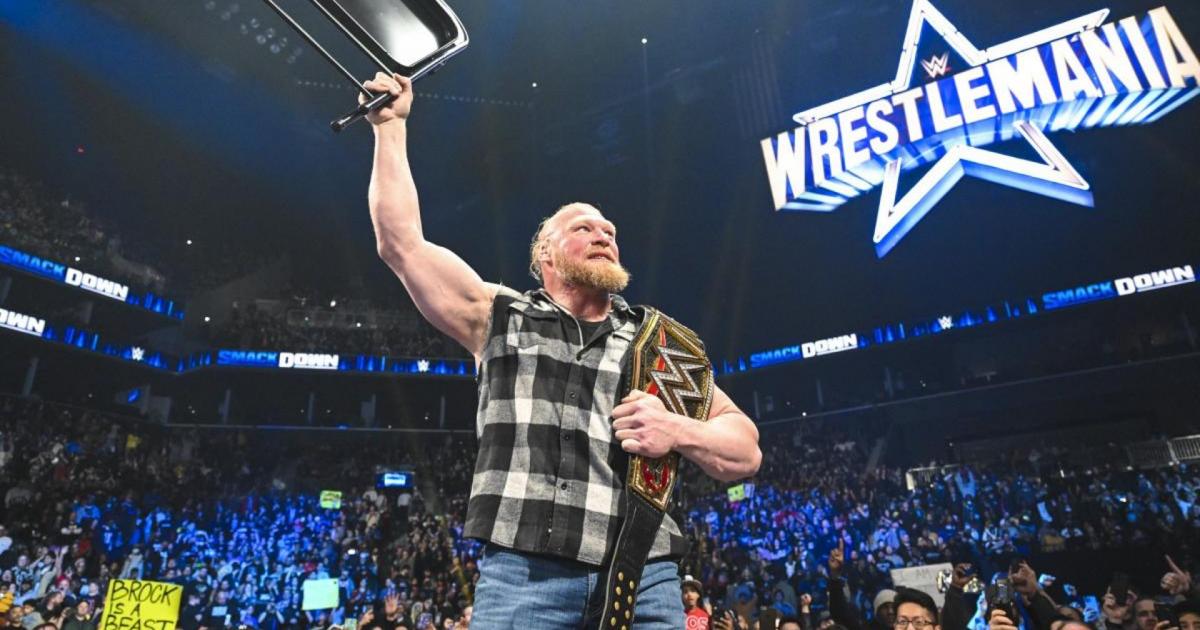 The biggest event in wrestling history takes place on April 2 and 3, as WrestleMania 38 heads to Texas. Inside AT&T Stadium, WWE is ready to entertain the masses with what it is calling a “stupendous” event.

Major title matches will take place, including a Winner Takes All match between Roman Reigns and Brock Lesnar. Ronda Rousey makes her WrestleMania return, while Bianca Belair once again will compete for a world title. Celebrities will also appear, as Logan Paul, Johnny Knoxville and Pat McAfee will all wrestle at the event.

1) What is your excitement level for WrestleMania 38?

Carlan: I’m going to be honest here. On a scale of 1-10, my excitement level for Wrestlemania 38 is at a 2. The build has been bland, the road to Wrestlemania has been predictable, and there are a lot of matches on the card that I think many will skip when they try to watch this event five to 10 years from now. At this point, I may skip watching the event live and catch the matches I want to see the following day once reviews are in.

Dan: Based on the level of talent on both cards, I am going to say about a 7 or 8 out of 10. WrestleMania shifting to two nights permanently is best for business, especially with the amount of talent the promotion has that might not have gotten a spotlight on them if it was one night. The event has a chance to wow people, even if the build to WrestleMania hasn’t felt the same compared to previous years.

As long as WWE delivers on major storylines and surprises (Cody Rhodes), fans should be smiling by the end of both nights.

Liam: In terms of overall excitement for this year’s WrestleMania, I’m sitting at about a 6/10 right now. It will be great to see a huge crowd back for the first time since 2019, but the build has been ordinary at times.

That being said, it’s still WrestleMania, and there are a lot of good matches on the card. Edge vs. AJ Style is a dream match, while the Brock Lesnar vs. Roman Reigns match is intriguing. Seth Rollins has been doing some great stuff on TV as well. I’m interested to see where that goes for him.

And, of course, the return of “Stone Cold” Steve Austin is going to be awesome.

MORE: Why is Logan Paul competing at WrestleMania 38?

2) Does night one or two have the stronger card?

Carlan: Night one of WrestleMania has the stronger card, and it’s not even close. Of the 12-plus matches over two nights, I’m interested in four of them. Three of those four reside on night one’s card. Both women’s title matches should be worth our time. If you’re excited to watch whatever the “Stone Cold” Steve Austin segment ends up being, good for you. I can’t get up for that. I’m sure I’ll see all I need from it in a social media video. Edge vs. AJ Styles might be the match of the weekend. Outside of the main event and Edge vs. AJ Styles on night two, you’ll have a hard time convincing me to go out of my way to watch the entire event live.

Dan: Night two has Brock Lesnar vs. Roman Reigns and Edge vs. AJ Styles. On the other side, night one features two women’s world title matches, Seth Rollins in action, and only one celebrity match with Logan Paul involved. Don’t forget, Kevin Owens will also have “Stone Cold” Steve Austin on “The KO Show.” With the idea that Austin is fit to wrestle, his appearance alone makes night one of WrestleMania a must-watch affair.

Liam: As it stands, night one is probably a deeper card. However, it doesn’t have that one blockbuster match like Brock vs. Roman. With the inclusion of the Kevin Owens/Steve Austin segment, I’m going to lean that way.

You also have got to factor in whatever Seth Rollins is doing.

MORE: Will Cody Rhodes be at WWE WrestleMania 38?

3) Which match are you looking forward to the most?

Carlan: The build for both women’s title matches has been lackluster, so I’m going with Edge vs. AJ Styles. Now, let’s be clear, this match hasn’t had the best buildup either. The thought of these two artists getting 20 minutes to put together a masterpiece has me intrigued. As I said before, I think this ends up being the match of the weekend for WWE.

Dan: Last year, Bianca Belair had her crowning moment when she beat Sasha Banks to win the SmackDown Women’s Title. This year, she is once again fighting for a title against Becky Lynch. These two have been known to put on great matches. Their chemistry is undeniable. Fans are ready to see Belair crowned as a champion once again.

Outside of that, a match that should be worth watching is Edge vs. AJ Styles. I am also interested in seeing how Cody Rhodes does in his return match, if that is the current plan.

Liam: The official “match” that I’m most looking forward to is Edge vs. AJ Styles. It’s a dream match. They are two legendary performers and it is another huge WrestleMania match for Styles.

There are a couple of interesting factors that make other segments more exciting.

If “Stone Cold” is going to wrestle or get physical — more than just a Stunner, a beer and a walk-off — his segment with Kevin Owens should be magic and a WrestleMania moment that people remember forever.

But for me, it’s all about Seth Rollins and whatever he does/whoever he faces. This certainly has my attention, and that’s what I’m most looking forward to. If he does fight a certain someone *cough* Cody *cough* I will be getting up out of my seat for that one.