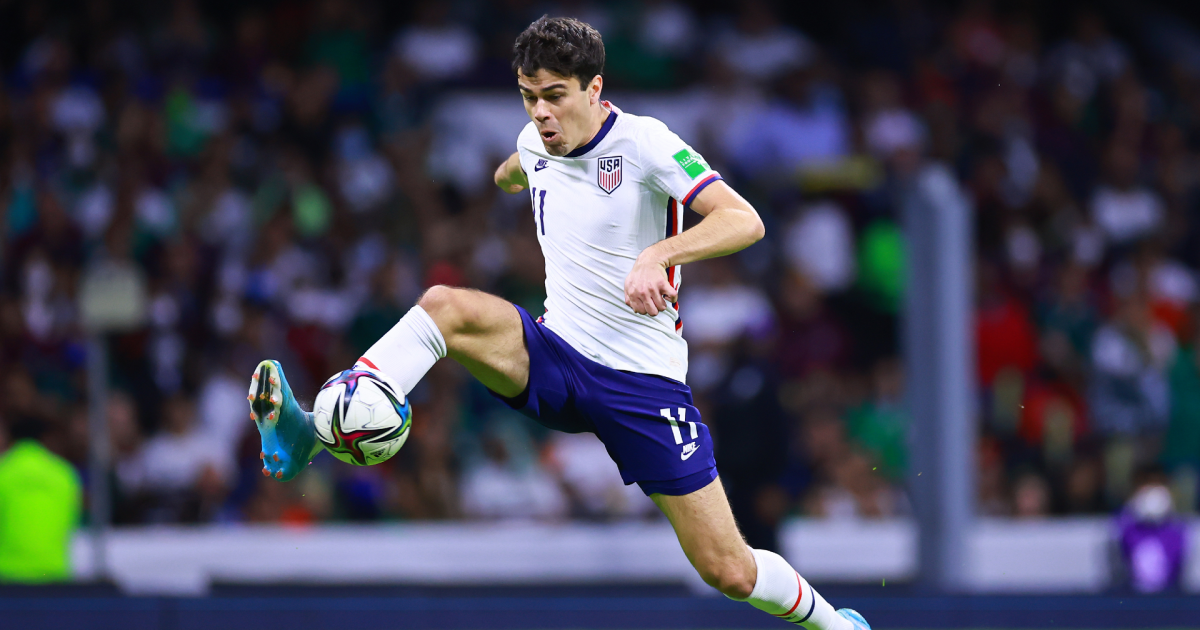 As the United States plodded along against Mexico in the 0-0 draw at the Estadio Azteca, there were few true highlights from the match. A tactical chess match that earned both sides a valuable point, neither side had an especially heaping portion of true attacking chances, and the U.S. missed the only good chances on net.

Still, there were highlights from the game. The most scintillating one came from a nearly special moment that was ultimately reduced to nothing more than a footnote from the highly anticipated match.

Gio Reyna, on as a substitute for the final half-hour as he returned from a long-term hamstring injury, embarked on a stunning end-to-end run that spread across social media. The 19-year-old picked up the ball deep in the U.S. half of the field and produced one of the most incredible one-man treks you’ll see, evading no fewer than six challenges in the process as he carried the ball into Mexico’s third.

It wasn’t to be, however, as he was eventually dispossessed just atop the Mexico penalty area, the ball breaking loose and the move came to nothing, nestling safely in the Mexico goalkeeper’s gloves. However, it was a sign of the young American’s talent, and fans of the USMNT will be glad to see him performing for the national team once again after a series of injuries.

We see you Gio Reyna 🔥 pic.twitter.com/F49wJUzd07

Reyna missed almost three months of the season, from September 4 to to November 29, with a muscle problem. He was fit in November before breaking down at the end of month, and he remained out of action until January. Since then he’s missed a few games through illness and a hamstring injury.

It’s not unusual for young players to pick up knocks and injuries, especially playing in a league as intense and frenetic as the Bundesliga, but Reyna’s turned into something more, keeping him out for months and scuppering multiple attempts at returning to the field. Americans fans will be happy to see Reyna adding to the 10 caps he already has to his name.

It also produced one of the most incredible statistical anomalies you’ll see in U.S. soccer, as he eventually led the game in successful dribbles just based on that one passage of play.

Gio Reyna led the #USMNT with six one-v-ones last night, and all of them came on this run. 🇺🇸 pic.twitter.com/4aIxpUBZZ8

Is Reyna the new Maradona?

The run was clearly enough on its own to capitvaate viewers. It wasn’t just fans who were left purring either, with USA coach Gregg Berhalter comparing the run to Maradona’s antics, during the 1986 World Cup, which was also held in Mexico.

“Mexico was the host of the ’86 World Cup where Maradona scored his wonderful goal, and I had visions of that when Gio was dribbling,” Berhalter said in his post-match press conference when asked about the young talent. “Unfortunately he didn’t finish it off, or get an opportunity to finish it off, but I think he made a solid impact and showed what kind of playmaking and attacking quality he has.”

The young attacker laughed off the comparison, pointing out that the dribble didn’t amount to anything, and next time he’d like to score from such a situation. Although the less said about Christian Pulisic’s reaction to the comparison, the better. Clearly the Chelsea man doesn’t quite share in his manager’s hyperbole.

Reyna’s contract at Borussia Dortmund is reported to run until the summer of 2025. With the German club’s history of buying youngsters, developing them, and then selling them, it remains to be seen what will happen next, with just three years left on his contract at the end of this season.

It’s likely that Borussia Dortmund will offer him an extension, likely with a considerable salary increase, to protect his value. Real Madrid have been linked with the young American in the past and, whether there was any truth to that or not, it’s easy to see why he would interest bigger clubs.

Reyna managed 32 league appearances for Dortmund last year, and 17 in the year before that, when he was still settling in Germany. He joined the club in July 2019, from the NYCFC, having come through their academy. It was apparent pretty quickly that he was good enough to at least be a squad player for Borussia Dortmund, and he soon found himself involved in first team matchday squads.

While his progress has been hindered slightly by injury issues this season, both US and Dortmund fans will be hoping that he can finish the season with consistent minutes, and hopefully pull off a few more dribbles at the same time.