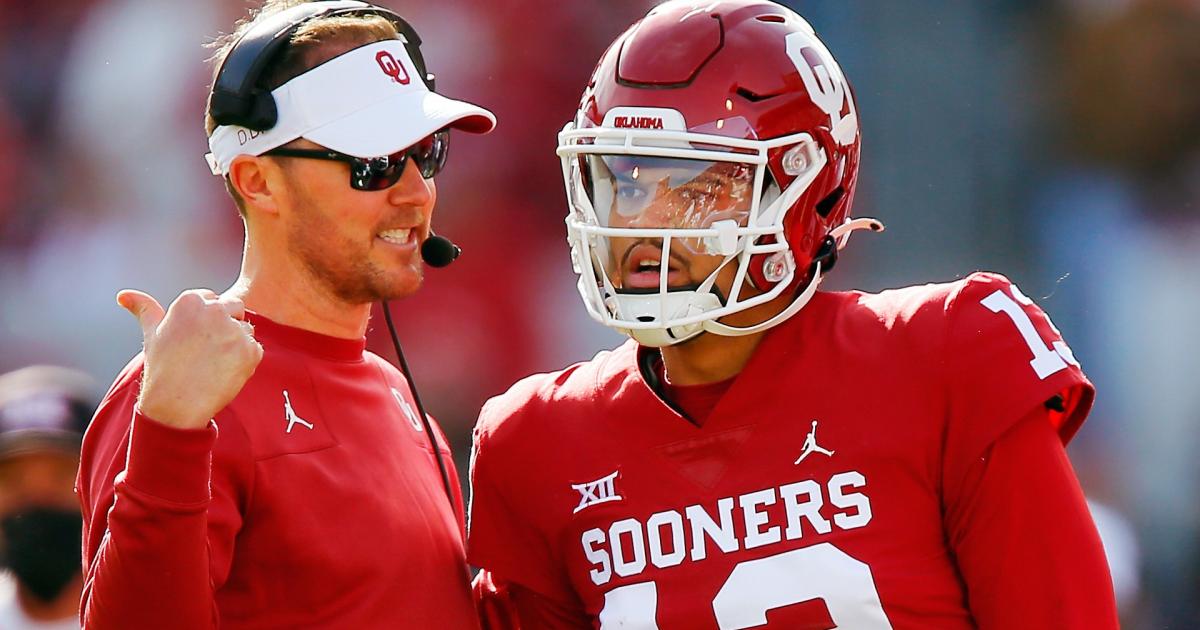 USC’s new coach was finally able to land the No. 1 piece in the transfer portal, five-star freshman quarterback Caleb Williams. The writing had been on the wall for a while, with UCF quarterback Dillon Gabriel choosing to transfer to Oklahoma, UCLA’s Dorian Thompson-Robinson deciding to come back to the Bruins and, most importantly, presumed USC starter Jaxson Dart entering the transfer portal.

That really left only one logical landing spot for Williams, and he will now be reunited with Riley.

Riley signed the No. 2 quarterback in the 2021 class out of high school 14 months ago, convincing him to come to Oklahoma from Maryland. And now, a little over a month after he left Norman for Hollywood, Riley is bringing his quarterback with him as he tries to bring back the luster to the Trojan program.

This is bad news for the Pac-12, which has been operating free of a dominant leader like the ACC (Clemson), Big Ten (Ohio State), Big 12 (Oklahoma) and SEC (Georgia and Alabama) have been. The Pac-12 championship game has featured six different schools and four different champions over the past six years. USC has won the South division twice over that time and the title once, and those numbers are about to go up over the next six years.

MORE: Why did Caleb Williams transfer to USC? Explaining his decision

And while it may be bad news for the Pac-12, it is good for those who want college football to be more of a national sport. And yes, college football used to be more than just a handful of teams from the Big Ten and SEC dictating the land and piling up top 10 finishes. In fact, in the not-so-distant past, schools in the Western part of the country actually had talented rosters and teams capable of winning national titles.

This isn’t black-and-white, leather helmets stuff. The West annually put multiple programs in the top 12. Since then, it has been a rather steep decline for schools in the Mountain and Pacific time zones. In the last three years, there has been just one Western program in the final top 15 each year (Utah was this year’s entrant at No. 12).

Can Riley not only revive USC, but revive the West? Williams will certainly help with the former. He showed more flashes of brilliance than freshman growing pains in his starts with the Sooners this year. Williams went 5-2 in his seven starts, plus had that amazing rescue job against Texas as he helped the Sooners recover from a 28-7 deficit to win 55-48. Williams completed 65 percent of his passes for 1,912 yards with 21 TDs and four interceptions, and may have had the heads-up play of the year with his steal-the-ball trick on fourth down late against Kansas.

What?!
OU freshman QB Caleb Williams helps convert a crucial 4th down – by stripping his own RB! Sooners are gonna avoid a massive upset vs Kansas.
📺: ESPN pic.twitter.com/GRqxI3pavU

Since Riley’s departure, it was speculated Williams may join him at USC. He stayed with OU through bowl season and piloted the Sooners to a 47-32 win over Oregon by throwing for 242 yards and three touchdowns. When he announced he was going into the portal, UCF’s Dillon Gabriel reneged on his transfer commitment to UCLA and decided he was going to Oklahoma. That signaled Williams wasn’t returning. Signal No. 2 game Monday, when USC quarterback Jaxson Dart, in line to start for the Trojans, entered the transfer portal himself.

Soon enough, it was Williams headed to Los Angeles.

Riley has put multiple quarterbacks in New York City as Heisman finalists and multiple quarterbacks into the NFL as starters. Williams knows a good opportunity when he sees one, and Riley’s rebuild just hit the fast-forward button. He had nice pieces already with Oregon running back transfer Travis Dye (1,271 yards, 16 TDs in 2021) and OU wide receiver Mario Williams (380 yards, 4 TDs), but Williams is the biggest piece that will have USC fans buzzing all summer.

It will be nice if the Trojan tide will raise a few more boats out West and make college football more national again.