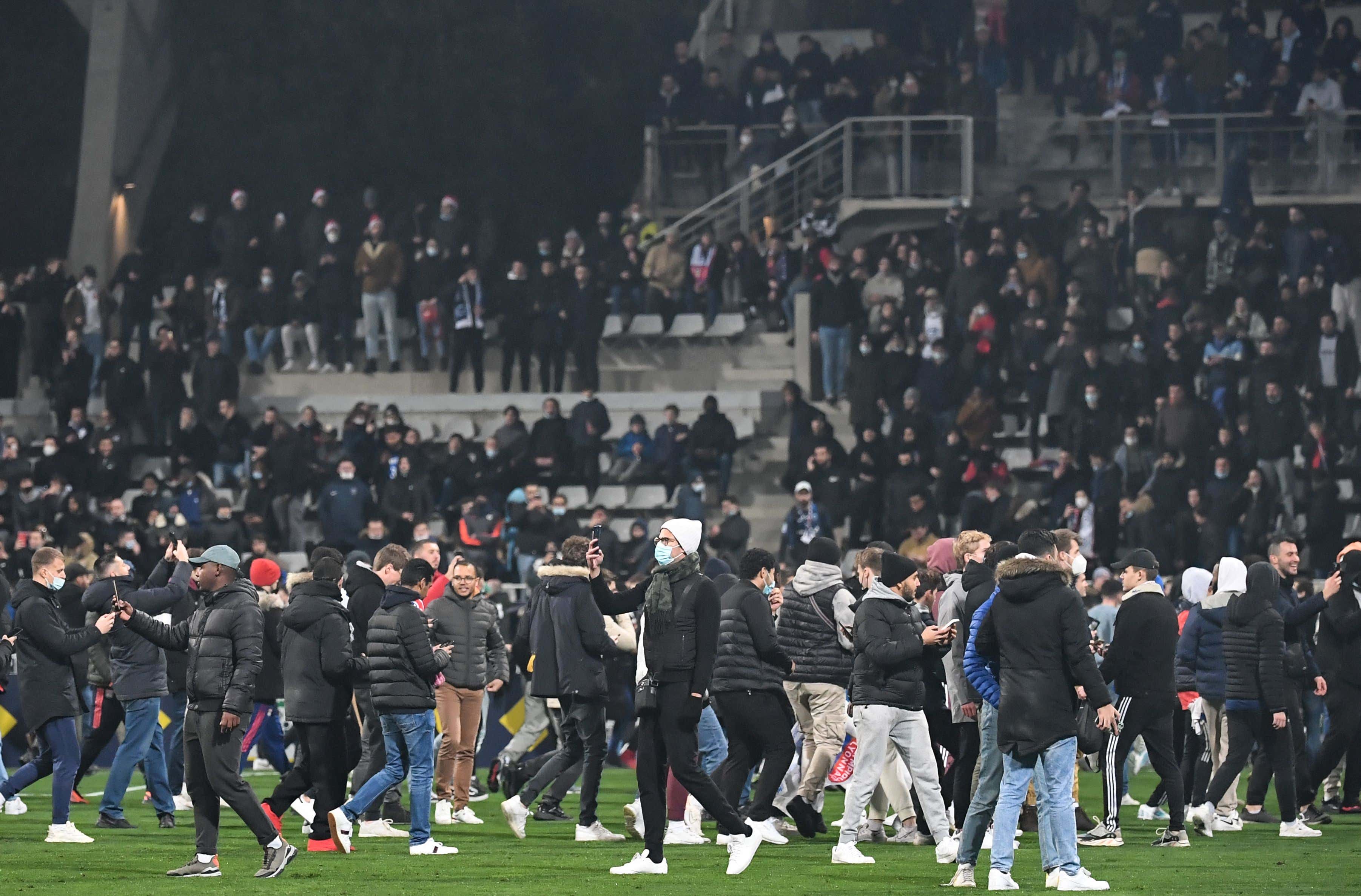 Lyon’s French Cup match against Paris FC on Friday had to be abandoned at halftime because of crowd trouble, the latest in a string of violent incidents to mar French football this season.

Trouble broke out between the two sets of supporters during halftime at the Charletty Stadium in Paris.

A pitch invasion occurred soon after, making a restart impossible, with the decision eventually taken to abandon the game shortly after.

Fighting broke out between the supporters during the halftime break, with flares being thrown and fireworks set off.

When police attempted to intervene fans began to spill onto the pitch, forcing the players and officials, who were ready to start the second half, to return to the dressing room.

The supporters were eventually cleared off the pitch as the police attempted to restore calm, but the decision was eventually taken to abandon the game, with the stadium announcer urging the fans in the stands to leave the stadium.

The game was level at 1-1 at that stage, with Gaetan Laura’s early strike for Paris FC cancelled out by Moussa Dembele shortly before the break.

Lyon president Jean-Michel Aulas and Paris FC president Pierre Ferracci both appeared to blame each other for the crowd trouble that led to the abandonment of the game.

Speaking to RMC Sport, Ferracci said: “I think it is in Jean-Michel Aulas’s interest to weigh up the pros and the cons well because he has a group of fanatics who should be nowhere near a football pitch.

“Aulas is clever enough to know that his club has problems and that French football will have problems if it continues like that.”

In giving his side of events, Aulas said: “The responsibilities are shared, it is a societal problem.

“The first firecrackers thrown were onto the Lyon fans and therefore were not done by Lyon fans. Then there was a rebellion. We also saw on the pitch hundreds of people who were not Lyon people.

“We need to analyze and find those responsible. We will sanction them, but we cannot take all of the responsibility.”

Crowd trouble in France this year

French football has been dogged by crowd violence and hostility towards players this season.

Lyon was docked a point in Ligue 1 last month because its clash with Marseille was abandoned after Marseille midfielder Dimitri Payet was hit by a water bottle thrown from the crowd.

The former West Ham man narrowly avoided a water bottle thrown at him from the stands and furiously threw it back into the crowd — sparking a stream of ultras jumping over the advertising hoardings to take to the pitch.

Further games involving Montpellier, Lens, Lille, Angers and Bordeaux have also been overshadowed by crowd violence, both inside and outside stadiums.