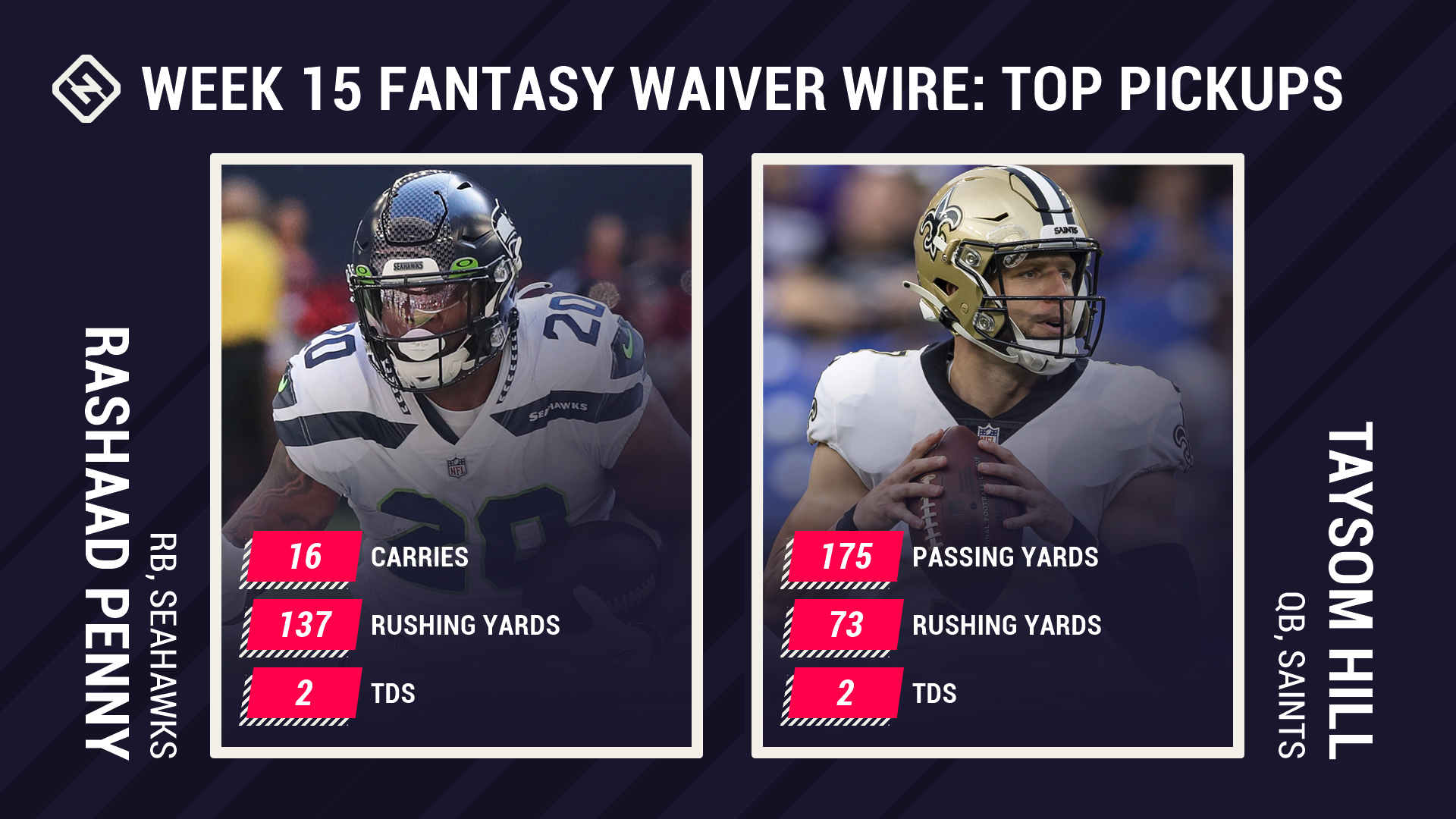 Usually, the top Week 15 fantasy waiver wire pickups and free agent adds result from big injuries, but in 2021, there’s a legitimate late-season breakout RB. It’s been a long road to get to this point for Rashaad Penny — and injuries, both his own and to others — certainly played a role, but after his best game as a pro, he’s going to be highly sought after on waivers as the fantasy football playoffs begin. The same is true for Taysom Hill, who offers the type of high-floor upside that comes in handy during these must-win weeks.

Our full free agent list doesn’t feature many “must-have” pickups, though Austin Ekeler-replacements Justin Jackson and Joshua Kelley certainly qualify. We also have a few unexciting-but-potentially key RBs (Royce Freeman, Justin Jackson, Joshua Kelley, LaMical Perine, Ty Johnson, Craig Reynolds) and some WR3 candidates like Gabriel Davis, K.J. Osborn, Russell Gage, Robby Anderson, Jamison Crowder, and Laquon Treadwell. However, the Week 15 streamer suggestions at QB, WR, TE, and D/ST are likely going to be much more available. Even with every team at our disposal, injuries, illness, and bad matchups will create the need for one-week fill-ins. You can find our streamer suggestions the end of this list.

Now that we’re officially in win-or-go-home territory, there’s no reason to be stingy with your waiver claims. If you need someone, get him. Penny is an obvious choice for top claim of the week, if for no other reason than to block another owner from getting him, but if you feel you need a QB, WR, TE, or D/ST streamer, it’s not crazy to let Penny (or the Chargers RBs) pass through waivers and focus on someone else. However, because there likely isn’t a clear top WR, TE, or D/ST in most leagues, you can probably focus on getting your streamers in free agency or at least in the second round of waivers.

Ultimately, it comes down to who’s available in your league and how competitive your league is. Ideally, teams that aren’t competing for anything won’t disturb the waivers process, but it’s likely many teams will put in multiple waiver requests. Take time and put in claims for anyone you might think you’ll need, and make sure to handcuff your RBs at some point, too.

Unless otherwise noted, only players owned in fewer than 50 percent of Yahoo leagues considered.

Rashaad Penny, RB, Seahawks. You never know what the Seahawks are going to do in their backfield until they do it, but for once, coach Pete Carroll made good on his promise to give Penny more touches. The oft-injured former first-rounder ran 16 times for 137 yards and two scores against the lowly Texans, reminding everyone that he has plenty of upside when healthy and given the chance. Alex Collins barely played before the game got out of hand, so this appears to be Penny’s backfield for the foreseeable future. His next two matchups aren’t great (Rams, Bears), but a Week 17 matchup against the Lions is enough reason to grab him if you’re in your fantasy playoffs.

Taysom Hill, QB, Saints. The passing stats won’t usually impress you (175 yards, no TDs in Week 14), but Hill remains an upper-tier fantasy producer thanks his rushing ability. A week after putting up over 100 yards on the ground, Hill finished with 73 yards and two scores against the Jets. A big chunk of that came on a 44-yard TD scamper in garbage time, but ultimately, Hill always has the potential to post numbers like that. With the Bucs, Dolphins, and struggling Panthers on tap the next three weeks, Hill could be a major difference-maker in the fantasy playoffs.

Justin Jackson, RB, Chargers. With Austin Ekeler suffering an ankle sprain that seems likely to keep him out of Week 15’s Thursday Night Game against the Chiefs, some combination of Jackson, Joshua Kelley, and Larry Rountree III will take over RB duties. Jackson and Kelley split carries almost equally after Ekeler left the game against New York, but Jackson has more receiving upside. We know how much L.A. likes throwing to its backs, so we give Jackson the slight nod as a priority pickup. However, Kelley and even Rountree, who was inactive in Week 14, could easily lead the team in rushing and get more goal-line carries, so every back needs to be picked up. Ekeler could be out multiple weeks, so a Chargers RB could really pay off in a premium matchup in Week 16 against Houston.

Gabriel Davis, WR, Bills. Davis has been seeing more targets around the goal line lately, and he’s taken advantage with TDs in each of the past two weeks. With Emmanuel Sanders (knee) exiting early in Week 14, Davis could continue to see more targets in general. In Buffalo’s pass-happy, high-powered offense, that would pay off in a big way. Matchups against Carolina and New England the next two weeks aren’t overly appealing (though he did score against the Patriots in Week 13), but a Week 17 matchup against Atlanta will make Davis a high-upside WR3.

Royce Freeman, RB, Texans. David Johnson (COVID) was inactive in Week 14, and Rex Burkhead exited early because of a groin injury. That leaves Freeman (17 touches, 66 total yards in Week 14) as the top available RB on the depth chart. It’s possible both Johnson and Burkhead will be back next week — Johnson is more likely to be — but as we always say, all starting RBs have potential value. That’s especially true against the Jaguars, who Freeman will face in Week 15. Houston will face the Chargers in Week 16, which is another highly favorable matchup, so there’s potential value in this backfield in the fantasy playoffs. Stay on top of all the practice reports.

For additional waiver/free agent suggestions, including more streaming options at every position, check out our full Week 15 list.