Travis Barker Is Flying 13 Years After Surviving A Deadly Plane Crash, And He’s “So Proud” Of His Daughter For Joining 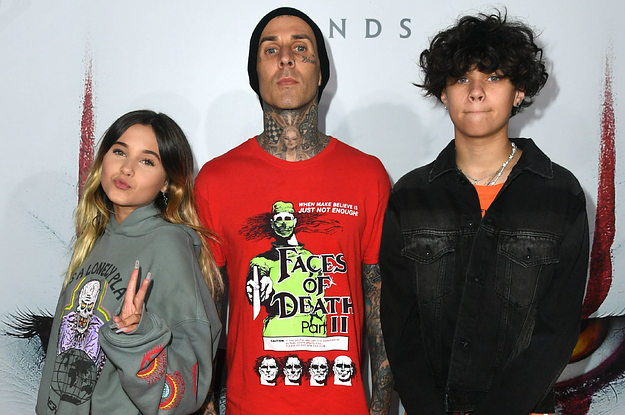 The drummer boarded a plane for the first time since 2008 in August.

Air travel holds a lot more significance to Travis Barker and his family than it does for most people. After surviving a deadly crash in 2008, the Blink-182 drummer avoided planes altogether until this past August, when he began to fly again with his fiancé, Kourtney Kardashian.

Travis boarded his first flight in over a decade to accompany Kourtney, her mom Kris Jenner, and Kris’s partner Corey Gamble on a trip to Cabo San Lucas this past summer. The couple returned to the same vacation spot recently and brought Travis’s two children along this time.

He gave his followers a glimpse of their sunny family vacation on Instagram yesterday, sharing a sweet collection of photos that pictured him, Kourtney, Alabama, and Landon riding horses along the beach somewhere. “Perfect day,” he captioned the social media carousel.

The post’s comments section included a heartwarming exchange between Travis and his daughter. Alabama initiated it, writing, “Love u the most,” with a raising hands emoji. When her dad replied, he acknowledged how big of a deal it was for them to be together so far from home.

“I’m so proud of you for flying,” he told Alabama.

Confronting fears isn’t easy, even when the desire to do so is there. We’re happy for Travis and glad to see him supporting his kids.