College football picks, predictions against the spread for every Week 13 Top 25 game 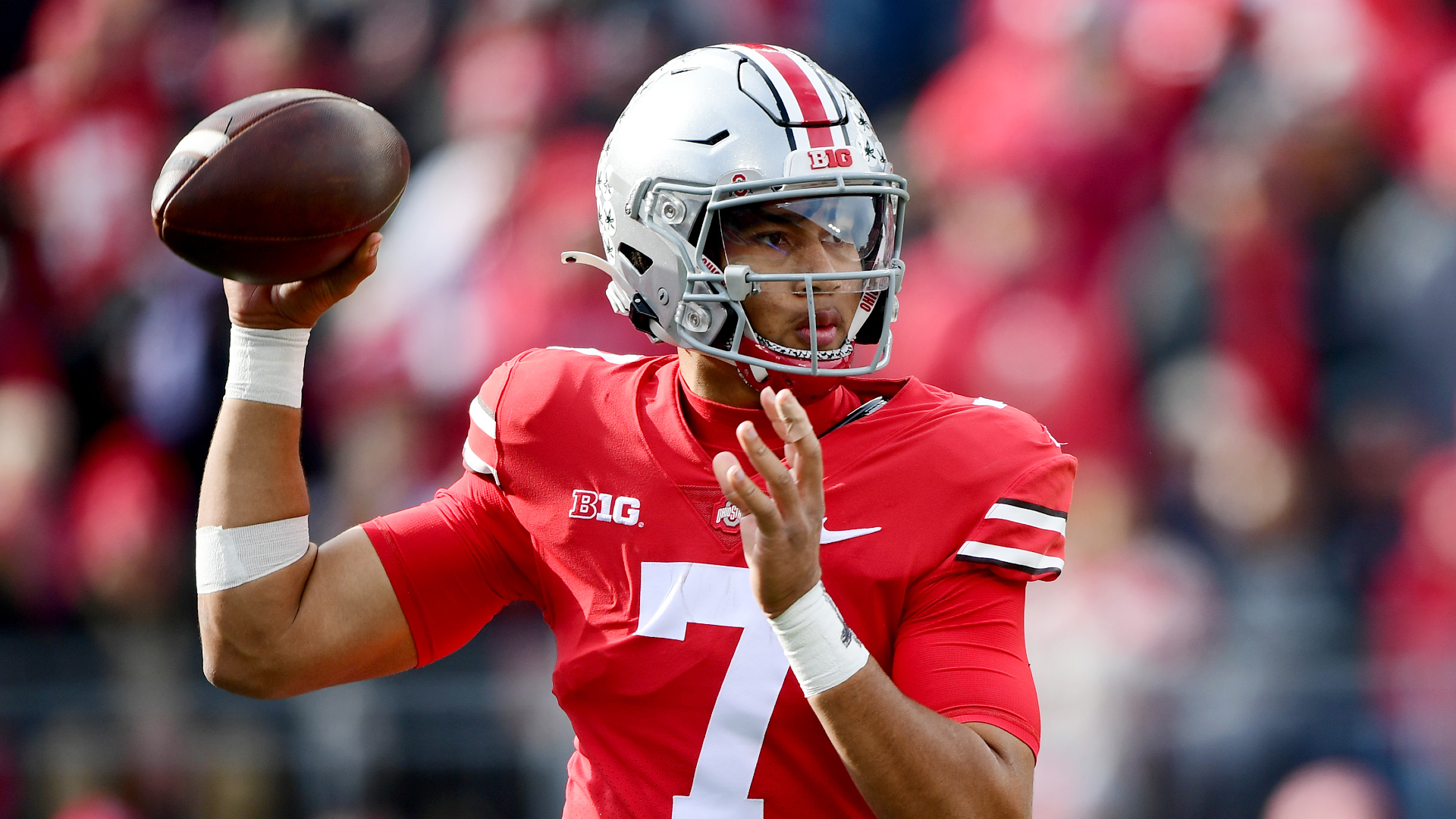 No. 2 Ohio State meets No. 6 Michigan in the The Game at noon in a battle of 10-1 teams looking to win the Big Ten East. It’s yet another chance for the Wolverines to break an eight-game losing streak to the Buckeyes.

The prime-time showdown features No. 10 Oklahoma at No. 7 Oklahoma State. The Sooners and Cowboys might have a rematch in the Big 12 championship game, but Bedlam is always a high-stakes matchup.

BENDER: It is a two-man race for the Heisman | Six candidates for Florida job

There’s also the Egg Bowl, the Iron Bowl and everything that makes this week special. These are the games that have a 365-day shelf life. Each week, Sporting News picks every AP Top 25 game by the spread. Here is a look at our track record this season:

With that in mind, a look at this week’s picks:

Week 13 Picks Against the Spread

The Egg Bowl should be a thriller between two exciting offenses. Ole Miss is 0-2 ATS as an underdog this season, but the Rebels are playing for a potential New Year’s Day Six berth. What wrinkles will Lane Kiffin and Mike Leach put in for this one?

The unranked Broncos are a road favorite, perhaps based on a four-game win streak and road victories at Fresno State and BYU this season. The Aztecs need this one, too, especially with the loss to the Bulldogs. The Broncos play spoiler in a low-scoring game.

The Huskers are favored, and this is a chance to build some momentum under Scott Frost for 2022. Nebraska has five one-score losses against ranked teams this season, and Iowa has won the last six meetings. Expect another close game where a late turnover could make the difference.

Arkansas played Alabama tough, and there is a small risk for an emotional letdown against Missouri, which is coming off a program-building victory against Florida (and some A-plus trolling of Dan Mullen). The Tigers have won the last five meetings, and the last two in Fayetteville have been close.

Pick: Arkansas wins 35-24 but FAILS TO COVER the spread.

This is a big line that could play out right on the line knowing Colorado has four Pac-12 road losses by an average of 23 points per game. Utah clinched its spot in the Pac-12 championship game, but we think it keeps it rolling at home.

The Tar Heels have been inconsistent this season, but they have a chance to sweep the other Triangle schools in what could be Sam Howell’s final game. NC State has lost the last two meetings in blowout fashion. A rivalry upset is in the works.

The Bulldogs are heavy favorites, and there should be little doubt who wins this rivalry matchup. Georgia, however, is 2-3 ATS when favored by 20 or more points. Georgia Tech is stuck in a five-game losing streak and coming off a 55-0 loss to Notre Dame. The Bulldogs have won the last three meetings by an average 36.7 points per game. When will they pull up?

The Buckeyes have dominated The Game in the last two decades. Will Michigan finally author a response? It’s going to be a challenge against that wide-open Ohio State offense that put on a clinic against Michigan State last week. Emotions will be high, and the Wolverines are due. But can they keep up with that offensive machine? This line could push toward double digits before kickoff.

Baylor is still shooting for a Big 12 championship berth, and the Bears can clinch a 10-win season with a victory against the Red Raiders. Texas Tech is 2-2 S/U on the road, and the teams have split the last four meetings. All of those have been decided by 14 points or less.

Pick: Baylor wins 30-20 and FAILS TO COVER the spread.

UConn has lost its last three games by 30 points or more, and Houston is capable of pouring it on. It’s still a game we’d prefer to stay away from knowing the Cougars are 4-4 ATS as a favorite and the line is high, but we think they gear up for the AAC championship game in style.

Wake Forest is coming off a realty-check loss to Clemson, and now they need to win at Boston College to clinch the ACC Atlantic Division. The Eagles have clinched bowl eligibility, but they do have home losses to NC State and Florida State. The Demon Deacons have more to play for here, and that translates in the second half.

UTSA kept its dream season alive in dramatic fashion against UAB, and now the Roadrunners face a Mean Green team that needs a win to become bowl eligible. UTSA leads Conference-USA with a run defense that allows 101.7 yards per game. The Roadrunners pull away in the second half.

The Bearcats could slide into the top four in the next set of College Football Playoff rankings, but they remain on the hook for style points. The Pirates are 4-1 S/U at home, and that loss was a 20-17 nailbiter against South Carolina. They will be in full spoiler mode, but the Bearcats look to be on the next level.

The Crimson Tide are huge favorites in the Iron Bowl. The Tigers are on a three-game losing streak. It’s on T.J. Finley to keep Auburn within striking distance. Alabama hasn’t had a blowout win at Jordan-Hare Stadium since 2011. That’s a lot of points in this game.

Pick: Alabama wins 38-20 and FAILS TO COVER the spread.

Oregon-Oregon State is for the Pac-12 North championship, and it’s a game the Beavers won last season. Oregon State won 41-38 last season, but the Ducks have won the last six meetings in Eugene. That streak continues.

Michigan State received its reality check in a 56-7 loss to Ohio State, and Penn State is trying to avoid a five-loss this season. James Franklin is 3-4 against the Spartans, but Penn State has won the last two meetings. The Nittany Lions also have a tough run defense.

The Badgers can clinch the Big Ten West championship with a victory against the Gophers, who are 2-4 ATS at home and have been inconsistent this season. Wisconsin hasn’t lost in Minneapolis since 2003, and that streak continues.

The line has bumped up a point from its open, and the Ragin’ Cajuns beat the Warhawks by 50 last season. UL-Monroe is 3-3 ATS when they are an underdog of 20 or more points.

Pick: Louisiana wins 41-20 but FAILS TO COVER the spread.

Texas A&M can finish off a nine-win season, but they will have to do it on the road at Death Valley. The Aggies haven’t won in Baton Rouge since joining the SEC, and this is Ed Orgeron’s send-off game. It’s going to be tight.

The Sooners have won Bedlam the last six seasons, but this might be the Cowboys’ best chance to reverse the trend. Oklahoma State allows 14.9 points per game, and OU quarterback Caleb Williams has struggled in two road starts. All that said, the Sooners find a way heading into a rematch the following week.

Pitt-Syracuse games have an uncanny knack for going off the rails. Pitt has won five of the last six meetings, and four of the last six games have been decided by seven points or less. The Orange have suffered back-to-back blowout losses, and the Panthers put an exclamation point on their ACC Coastal championship run.

Where was this Notre Dame team in September? The Irish have covered in each of their last six victories, and Stanford has lost six in a row and failed to cover in each of those losses. Follow those trends, even on the road.

BYU is looking to cap a 10-win season, and USC has reached a low point after losing by double digits in four of the last five weeks. The Trojans could put up a fight, but the Cougars will stay engaged in the second half. Get this before the line bumps up over a touchdown.