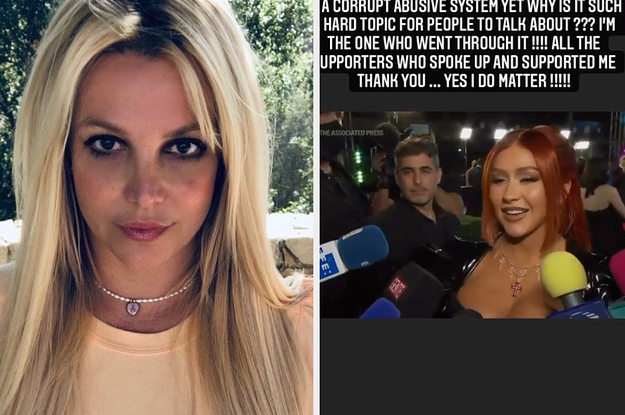 “Refusing to speak when you know the truth is equivalent to a lie.”

Many celebrities have taken to Twitter to express their support for Britney, congratulating her on the termination of a conservatorship that seemed to really hinder her quality or life.

One of those celebs was Lady Gaga, who tweeted this:

Gaga then spoke about Britney at the House of Gucci premiere, again emphasizing how happy she was for Britney. “She is incredibly inspirational. I’m just so happy that we get to celebrate today — that she gets to embark on a new phase of her life. She authored her freedom.”

Britney saw Gaga’s sweet words and posted it on her Instagram story, writing, “Thank you, Lady Gaga, for genuinely taking your time to say something so kind. You made me cry! I love you!”

In the interview, Christina is asked about whether she’s had any communication with Britney. Christina appears to signal to her publicist or manager, who then cuts off the interview, saying, “No, we’re not doing that today.”

Christina then says, “I can’t, but I’m happy for her” before walking away.

Well, Britney posted the clip on her Instagram, writing, “Refusing to speak when you know the truth is equivalent to a lie. Thirteen years being in a corrupt, abusive system, yet why is it such a hard top for people to talk about?”

“I’m the one who went through it! All the supporters who spoke up and supported me, thank you. Yes, I do matter!”

It’s worth mentioning that Christina has publicly shown support on Twitter while the conservatorship situation was being hashed out in court. “It is unacceptable that any woman, or human, wanting to be in control of their own destiny might not be allowed to live life as they wish,” she wrote.

As you know, Britney and Christina have had a rocky relationship since they both rose to fan from kids on The Mickey Mouse Club and became pop star rivals in the 2000s.

From the media pitting them against each other to shady comments about each other through the years, things have always been contentious between the two.

Christina has not yet addressed the situation or Britney’s post, but we will update you if she does.