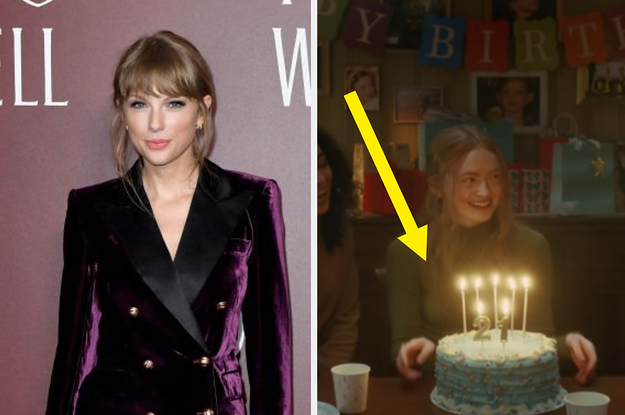 The video shows a young woman navigating a tumultuous relationship with an older man, culminating in a heart-wrenching break-up and, ultimately, a fresh start.

Watching this film, I’ve sang, cried, gasped, and yelled “Give everyone involved an Oscar.” It truly is an amazing work of art. And what makes it so great was the way Taylor included small details, references, and Easter eggs throughout. Here are some of the best:

1. The Mercedes in the video is a 1989 Benz, which led a lot of people to speculate that 1989 may be the next album rerecording she’ll release:

2. The “All Too Well” book revealed at the end resembles Alice’s Adventures in Wonderland‘s cover…

“Wonderland” is a track from 1989, which features the lyrics: “We took a wrong turn and we fell down a rabbit hole.” Taylor referenced this line on The Tonight Show Starring Jimmy Fallon earlier this week:

3. The scarf is an obvious one, but it’s been so mythologized by Taylor and the fandom for years. In the video, we see Her wearing the scarf, leaving it on the banister, and eventually, we see it worn by Him after the dissolution of the relationship.

4. Another slightly obvious one for Swifties — we see what could be the infamous birthday celebration that Taylor’s boyfriend at the time didn’t show up for. It’s referenced in the film and in “The Moment I Knew,” and clearly played a role in the breakup.

5. The film’s birthday scene also seems to reference the “Lover” music video birthday scene. The ATW shirt is similar to the “Lover” video dress, and the fact that her boyfriend showed up for her birthday during “Lover” showed how she was able to move on to a healthy relationship with Joe Alwyn (who “Lover” is about).

6. The action of Him dropping Her’s hand is referenced in the Evermore fan favorite, “Champagne Problems.”

7. An obscure one: The thumbtack we see in the typewriter scene was actually hinted at by Jimmy Fallon in a TikTok promoting Taylor’s appearance earlier this week. Normally, he has boring clear ones, but for Taylor he had a red one:

8. Her in “All Too Well” ignores a call and presses the top of the iPhone, a small detail that lines up with where iPhone lock buttons were located on the phone in 2010 — when Taylor and Jake Gyllenhaal supposedly dated.

9. The film features Him and Her playing cards, which seems to reference Ed Sheeran’s song “Joker and Queen.” Ed said he was planning a remix of the song with an American artist — many now think Taylor.

10. The film has chapters throughout — which ultimately makes sense when it’s revealed that Taylor is the author at the end. This is a metaphor for Taylor IRL and Taylor the ATW character healing from her pain through art.

11. The “later on” version of Him is played by Jake Lyon, which obviously, we know is most likely a reference to Tay’s ex, Jake Gyllenhaal.

Then, at the 13:00 mark, we see “Written and Directed By Taylor Swift.” Making her short film directorial debut is a big moment for Taylor.

And at the 14:45 (1+4+4+5=13) mark, we see Taylor Swift’s copyright, a pivotal mark for someone who’s fought for the rights of writers and artists to own their art and work. (It used to say Big Machine Records.)