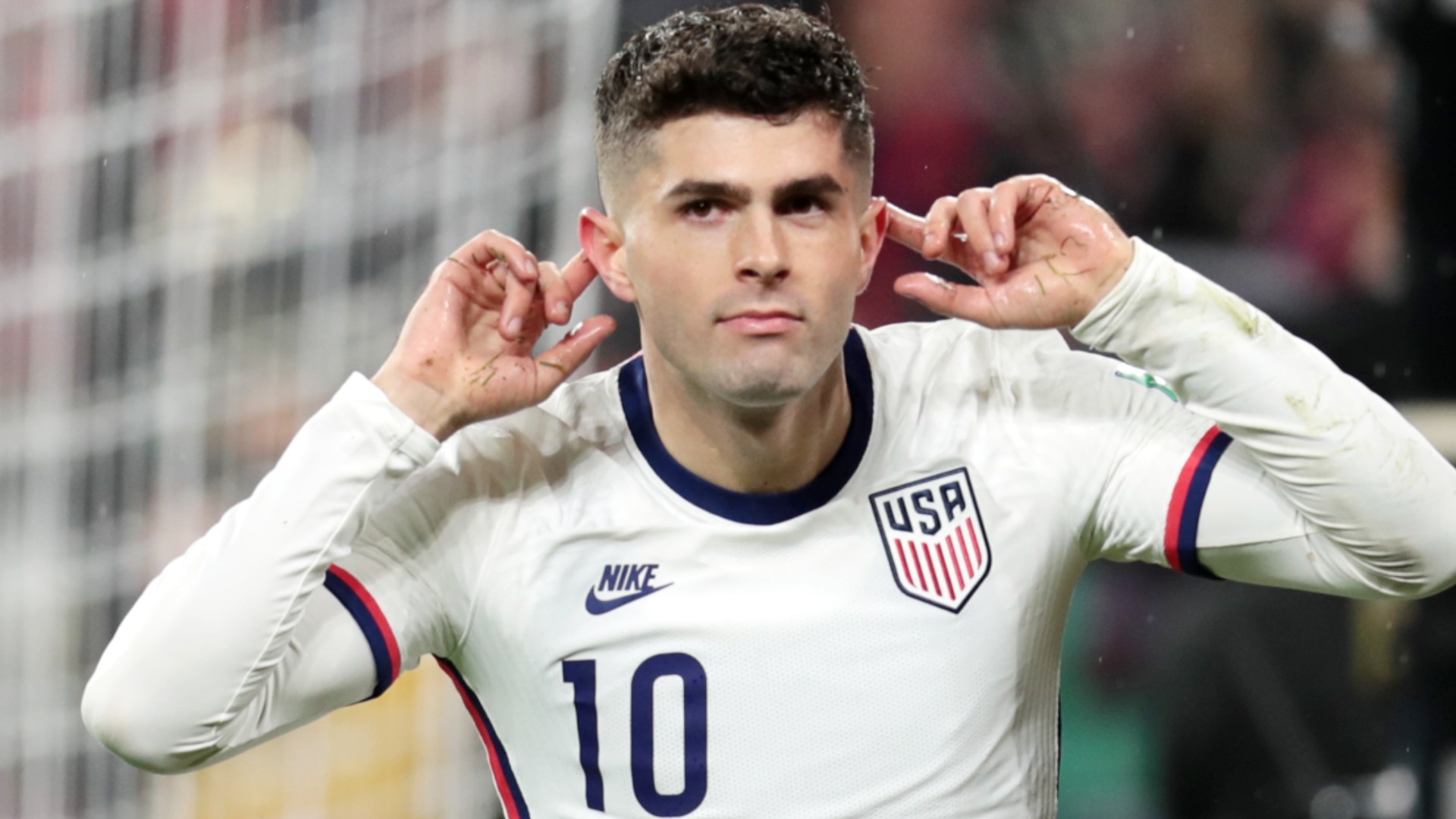 There’s no question about it now. The USA is the best team in CONCACAF and owns this version of the Mexican national team. It was the latest 2-0 win for the Americans in Ohio against El Tri, a “dos a cero” result that will bring back nightmares for a Mexican side that suffered its first loss in 2022 qualifying against its biggest rival.

The Americans wrapped up a year of domination over Mexico with a third victory in a row in a competitive match. After winning the Nations League final and the CONCACAF Gold Cup during the summer, the USA took the first of two World Cup qualifiers with goals by Christian Pulisic and Weston McKennie securing a big three points that vaults the USA into first place in the CONCACAF qualifying standings. According to ESPN’s Taylor Twellman , the last time the USA or Mexico won three matches against the other in a single year was 1937.

After a chaotic first half in which both teams had looks — though Mexico had the best chances — the USMNT poured on the pressure in the second half and El Tri folded and its intensity disappeared. The USA finally broke through five minutes after star forward Christian Pulisic entered the game. His header on a Tim Weah cross gave the USA a lead it would not give up. Then five minutes from time McKennie sealed the result, taking advantage of a lucky bounce.

Mexico was more competitive in the first half when it had two clear looks at goal, which it could not convert. In the 19th minute Hirving “Chucky” Lozano couldn’t get enough on his shot on goal which was stopped by U.S. goalkeeper Zack Steffen. In the 31st minute Lozano turned provider for Jesus “Tecatito” Corona, who couldn’t capitalize on a clear volley attempt. A red card to U.S. defender Miles Robinson in the 89th minute happened too late for Mexico to gain any advantage.

The next round of qualifiers takes place on Tuesday with the USA traveling to Jamaica, where it will have to play without Robinson (red card suspension) and McKennie, who will be suspended for yellow card accumulation. The Mexicans take a trip to Edmonton to face a Canadian side that could overtake it in the standings in the case of another loss.

89th min.: Red card! Miles Robinson gets a second yellow for pulling down Chucky Lozano. He’ll be suspended for Tuesday’s match in Jamaica in addition to McKennie.

85th min.: Goal USA! Weston McKennie takes advantage of a bounce which goes his way and he fires inside the far post. But Mexico is claiming there was a Walker Zimmerman hand ball on the play.

83rd min.: SUB – Mexico throws another forward in with Rogelio Funes Mori coming in for a midfielder, Edson Alvarez.

81st min.: Big play in the box by Miles Robinson. If it wasn’t for him, there’s a ball in the box that would have fallen to Mexico.

76th min.: SUBS – Piojo Alvarado and Charly Rodriguez are on for Tecatito Corona and Luis Romo

74th min.: Goal USA! Great play by Tim Weah on the right and his cross finds Christian Pulisic streaking across the box and he heads home.

68th min.: Another flare-up! Chaka Rodriguez knocks Brenden Aaronson down and then drags him down by the face. It’s yellow cards for Weston McKennie (protests), Zack Steffen (protests) and ultimately Chaka Rodriguez. McKennie will miss the USA’s next match in Jamaica on Thursday. Could it have been a red card for Chaka Rodriguez with VAR? We’ll never know.

67th min.: Christian Pulisic is getting instructions on the bench. He’s set to come into the game.

65th min.: Players coming together in midfield and there’s some shoving. The ref is patient and lets the players calm down. No cards.

59th min.: Yellow to Miles Robinson, who stops Luis ‘Chaka’ Rodriguez on a promising attack. The yellow could’ve also been for the reckless high arm into the face of Chaka.

54th min.: That was the chance for Ricardo Pepi! The ball falls to the U.S. forward near the penalty spot and he can’t get the first-time shot on goal. Those are the chances he lives for.

51st min.: Really hard block foul by Raul Jimenez on Tyler Adams from behind and the American needs some time before getting up. The U.S. bench wants a yellow card which doesn’t come.

49th min.: Best chance of the game for the USA. Tim Weah on the right cuts it back to an onrushing Weston McKennie and Memo Ochoa has to make the reflex save.

48th min.: Immediate pressure by the USA in the Mexico half and Antonee Robinson gets a volley shot after a bad Mexico clearance, but it’s off the back of Mexico defender Cata Dominguez.

46th min.: Second half is underway. No changes.

Halftime: That was a high-energy, hard-fought, evenly matched first half. It was chaotic and sloppy, at times, but enthralling. Both teams had a few half chances and Mexico had the two best looks through Chucky Lozano and Tecatito Corona. Teams will tire in the second half and more spaces will open up. This game feels like it has multiple goals in it.

44th min.: Two U.S. players go down in the Mexico box, but the referee does well not to fall for them. No penalties.

41st min.: Antonee Robinson beats Mexico’s Chaka Rodriguez in the air to a header in the Mexico box. Robinson has been busy attacking down the left flank and he’s beating Chaka Rodriguez with ease.

38th min.: Excellent play from the USA. Cross from Antonee Robinson on the left, Pepi collects and touches to an onrushing Yunus Musah, but his shot is not on target.

34th min.: Another U.S. corner but nothing comes of it. Credit to Mexico for strong set-piece defending so far. The USA hasn’t been dangerous on those plays.

31st min.: What a chance for Mexico! Chucky Lozano with a perfectly weighted ball to Tecatito Corona on the right side of the box and his volley finishes wide. Tecatito will want that one back.

25th min.: The game has cooled off a little bit, but there’s still an edge to this. It’s about which team will make the first big mistake.

19th min.: It’s back and forth with these teams. Now it’s Chucky Lozano with a chance on a breakaway and Steffen has to come up with another stop. Impressive pace to this game.

18th min.: Another shot on goal for the USA. Brenden Aaronson with the shot, but Ochoa stops it. Neither team spending much time on the ball. The pressure is too fierce.

12th min.: Great save by U.S. ‘keeper Zack Steffen. First big save of the match off an Edson Alvarez shot. That was a Tyler Adams who gifted that chance to Mexico.

8th min.: Breakaway for the USA and Tim Weah opts for the shot from distance which forces Memo Ochoa into a save.

5th min.: Cross from by Tim Weah on the right and Ricardo Pepi gets a touch on it in the Mexico box, but not enough to cause issues for Memo Ochoa.

2nd min.: The match is electric already. Players running at each other at 100 miles an hour.

1st min.: We’re off. Mexico kicks and the USA immediately comes out with the high press.

Tonight’s #USMNT vs Mexico referee (Iván Arcides Barton Cisneros-SLV) has refereed 3 previous matches of USMNT with the US winning 2 & drawing one of those matches. #USAvMEX

The last time the 🇺🇸 or 🇲🇽 won 3 straight games against each other in a calendar year………1937.

Can the @USMNT change that tonight here @TQLStadium in Cincinnati?! #USMNT #USAvMEX

USMNT head coach Gregg Berhalter revealed that Manchester City goalkeeper Zack Steffen will start (though he said it could have easily been Matt Turner) and Chelsea star Christian Pulisic will not. When the roster was announced , he made it clear that Ricardo Pepi would be getting the bulk of the minutes at forward.

Mexico comes into the match with headaches along the back line, where center backs Nestor Araujo (suspension) and Cesar Montes (injury) are out, and Hector Moreno, who was a gametime decision, starts on the bench. Julio Cesar “Cata” Dominguez and Johan Vasquez will form the center back partnership.

DECOURCY: Rivalry is everything when it comes to USA vs. Mexico

How to watch USA vs. Mexico

USA vs. Mexico will air on ESPN2 (English), and Univision and TUDN (Spanish) with all three channels streaming on fuboTV . New subscribers can get a free 7-day trial to the streaming service.

MORE: How the USA can qualify for the 2022 World Cup

The match will be held at Cincinnati’s TQL Stadium, the home of Major League Soccer’s FC Cincinnati. The venue opened last May.