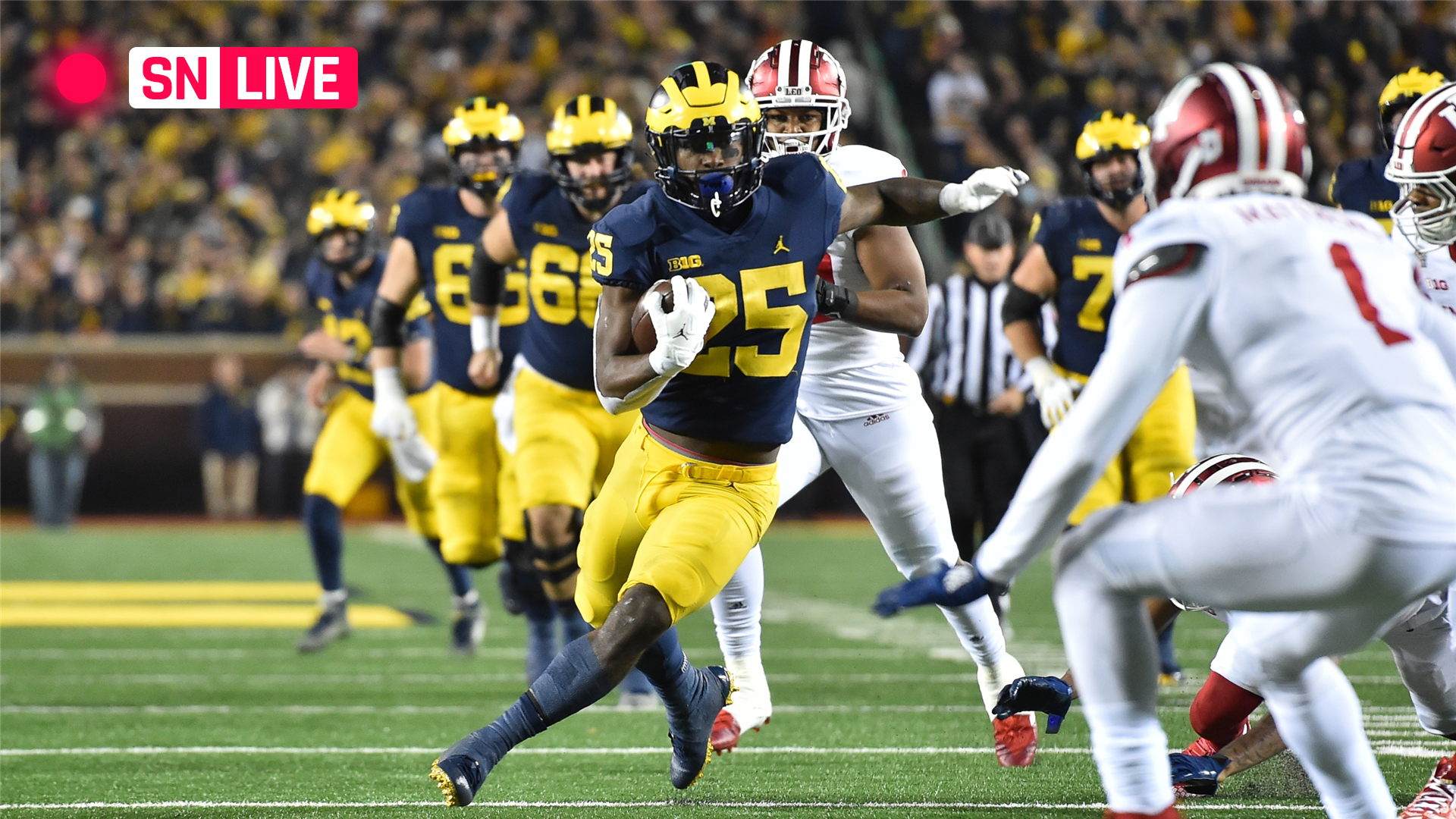 Following the unveiling of Tuesday’s second set of College Football Playoff rankings, two of the more talked about teams were Michigan and Penn State, but for different reasons.

The Wolverines, through no fault of their own, became a topic of conversation because of where they were ranked. They checked in at No. 6, one spot ahead of Michigan State, despite the Spartans having a head-to-head win over Michigan. Playoff committee chair Gary Barta then offered a milquetoast explanation as to why the Wolverines were ahead of Michigan State, which still left a lot to be desired.

The other topic of conversation was surrounding Penn State, which has yet to break through in the first two rankings. The Nittany Lions are 6-3, the same record as five other teams in this week’s top-25. Two of their wins are against current top-20 teams as are two of their losses.

They’ll look to finally earn a spot in the rankings this upcoming week as No. 6 Michigan heads to Beaver Stadium. Penn State is 3-3 against Michigan since Jim Harbaugh has led the maize and blue, but the Nittany Lions have won the last two matchups.

Michigan could be without two of its star running backs in Blake Corum and Donovan Edwards, while Penn State should be relatively healthy as it looks to pull off the upset and climb its way up the rankings.

Sporting News will be tracking live scoring results, updates and highlights from this key Big Ten East matchup. Follow below for complete coverage throughout.

2:15 p.m.: Clifford is sacked for the sixth time today and then just gets rid of it on the sideline. Third-and-13 for Penn State from their own 47.

2:10 p.m.: TOUCHDOWN MICHIGAN. The Wolverines extend their lead as Roman Wilson hauls in his second score of the game. Michigan 14, Penn State 6 with 11:50 left in the third quarter.

2:08 p.m.: McNamara under major pressure and throws out of a sack to Erick All down to the 1-yard line.

2:03 p.m.: Wolverines marching early and are already well across midfield and at the Penn State 35 after McNamara hits Johnson for 25 yards.

2:01 p.m.: Michigan’s first play of the third quarter is a 3-yard run for Hassan Haskins.

1:59 p.m.: The Wolverines get the ball here to start the second half and its a touchback so they’ll take over at their 25.

1:36 p.m.: FIELD GOAL PENN STATE. The Nittany Lions get on back the board as the first half nears a close. Michigan 7, Penn State 6 with 31 seconds left following Stout’s 52-yarder.

1:35 p.m.: Clifford coughs it up on third down but Penn State falls on it. Sets up a 52-yarder field goal for Penn State with 31 seconds left.

1:33 p.m.: Clifford hits Washington for 44 yards to the Michigan 25 and the Nittany Lions seem to be marching.

1:29 p.m.: Michigan keeps its offense on the field on fourth-and-2 from the Penn State 38 but the Wolverines are swallowed up for a loss and turn it over on downs.

1:26 p.m.: With 2:21 left in the first half, Michigan calls its second timeout staring at third-and-14 from midfield.

1:23 p.m.: Michigan tries for the flea flicker and Penn State gets flagged for defensive pass interference. Ball now on the Penn State 46.

1:17 p.m.: Penn State goes three-and-out following the Michigan touchdown. Jordan Stout punts it away and Michigan takes back over at its own 12.

1:10 p.m.: TOUCHDOWN MICHIGAN. First touchdown of the game by either team comes from the Wolverines as McNamara hits Roman Wilson for 21 yards following the Penn State timeout. Michigan 7, Penn State 3 with 5:49 left in the second quarter.

1:06 p.m.: Wolverines just exerting their will in the run game right now. 14 plays on this drive, including eight runs. Penn State calls a timeout, its first of the half. Michigan looking at first-and-10 from just outside the red zone at the Penn State 21.

1:02 p.m.: Michigan choosing to go for it on fourth-and-2 from the Penn State 47 as Haskins lunges forward and picks up the first.

12:59 p.m.: After getting dropped for a sack, Penn State gives up a conversion on third-and-13 as McNamara hits Hassan Haskins for 15 yards on the screen pass. Michigan now at the 45.

12:58 p.m.: Michigan gets its first first down of the day as Cade McNamara hits Cornelius Johnsons for a big gain of 22. Michigan now at the 36.

12:56 p.m.: On third-and-11, Clifford is sacked again and fumbles it but Penn State recovers. Still, the Nittany Lions punt it away. Michigan takes over at the 10.

12:50 p.m.: The first quarter ends with two nice running plays for gains of 4 and 10 yards, respectively. Nittany Lions will start the second quarter at their own 39.

12:45 p.m.: The touchback call is overturned. Penn State instead takes over at its own 2-yard line.

12:40 p.m.: Michigan’s second offensive drive of the game results in another three-and-out. Wolverines punt it away and it goes for a touchback but it’s under further review.

12:35 p.m.: Penn State sends the field goal unit out and attepmts to fake it again, but Michigan diagnosed it perfectly. Stout then fumbled and Michigan recovers. Wolverines take over at their 29.

12:33 p.m.: Clifford again keeps it himself on second-and-7 as he evades the blitz and pressure and scrambles for 18 yards. First-and-10 from the Michigan 10.

12:31 p.m.: Penn State continues to march. Clifford hits tight end Theo Johnson for 19 yards and Penn State is at the 31.

12:30 p.m.: Clifford continues to make things happen with his legs. A 5 yard gain on third-and-4 gives the Nittany Lions a first down. Penn State is 3-for-5 on third down so far today.

12:25 p.m.: The Wolverines go three-and-out and punt it away. Jahan Dotson returns it to the Penn State 23.

12:18 p.m.: Penn State fakes the punt as Jordan Stout takes the snap and hits Curtis Jacobs for 18 yards to the Michigan 21.

12:14 p.m.: On third-and-6 from the Michigan 39, Clifford overthrows it and it’s now fourth-and-6. Wolverines call a timeout before the punt.

12:12 p.m.: Clifford scrambles with it on second down and picks up 11 and then keeps it on a QB draw on third down and takes it 13 yards for the first down. Penn State driving early.

12:09 p.m.: Sean Clifford gets hit for intentional grounding on second down. Now third-and-17 from the 18 for Penn State.

12:07 p.m.: Michigan wins the toss and elects to defer. Penn State gets the ball to start the game.

11:59 a.m.: Penn State is also getting two of its key defensive starters back this week.

11:48 a.m.: The Wolverines will be without one of their top running backs today against Penn State.

Michigan RB Blake Corum and CB Gemon Green did not make the trip, a team spokesman confirms to @MLive.

Michigan vs. Penn State will kick off at noon ET from Beaver Stadium in State College, Pa.

How to watch Michigan vs. Penn State

This matchup between perennial Big Ten powers will air on ABC. Sean McDonough is manning play-by-play duties while Dan Orlovksy joins him as the analyst. Molly McGrath accompanies the two as the sideline reporter.