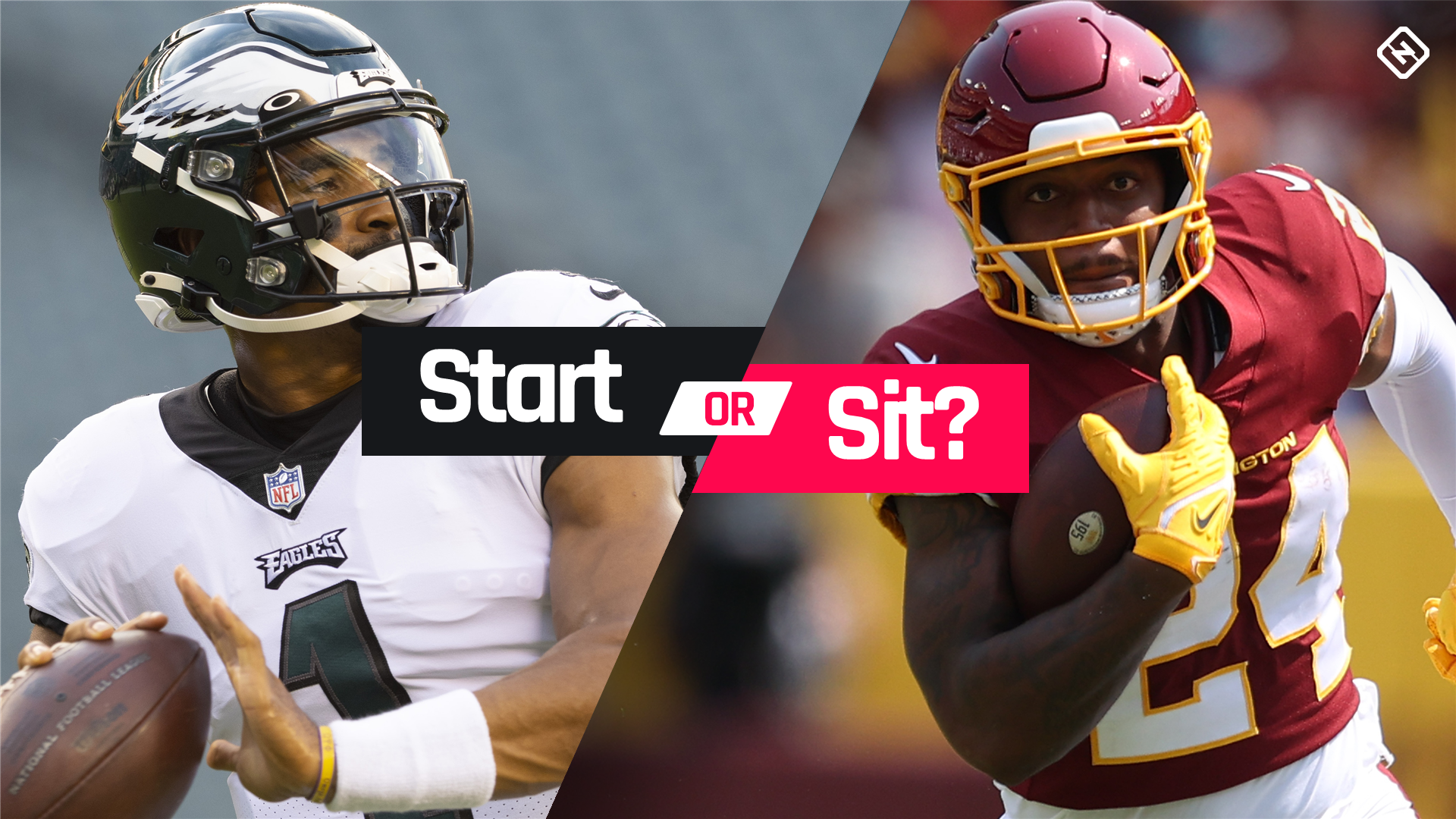 Plenty of lineup calls hang in the balance as we wait for more injury/illness info on guys like Aaron Rodgers, Kyler Murray, Nick Chubb, Antonio Brown, Dawson Knox, Chris Carson, and other key fantasy contributors. In the meantime, stock up on viable replacements, paying special attention to whether these guys are scheduled to play in late-afternoon or prime-time games. Having worthwhile fill-in options will make your life easier come Sunday, regardless of whether you need to call on a backup or stick with your starter.

Derek Carr, Raiders (vs. KC). There’s no doubt he tends to be better at home and will be involved in a Sunday night shootout with Patrick Mahomes.

Carson Wentz, Colts (vs. JAX). He keeps getting it done with multiple scores and sharp passing playing off the run, and the matchup rocks as the Jaguars’ defense will go into the tank on the road again.

Matt Ryan, Falcons (at DAL). He showed something with his creativity last week in a tough spot on the road, and he should get it done more with volume opposite Dak Prescott.

Jalen Hurts, Eagles (at DEN). You might think the matchup is bad, and based on recent results, he should be benched. However, Week 8 against the Lions was weird because of four rushing TDs from others, and Hurts still finished as a QB12 with a shaky performance against the Chargers. His high floor will help him again, and the Eagles have a chance to score enough to win.

Ben Roethlisberger, Steelers (vs. DET, $5,600 on DraftKings, $7,100 on FanDuel). Roethlisberger won’t need to throw all that much against the Lions, but he should be able to churn out at least 250 yards and two TDs with his talented weapons, providing solid return in cash games.

Taylor Heinicke, Washington (vs. TB). He should have some healthier weapons to take advantage of good volume opposite Tom Brady. It may not be pretty with a turnover or two, but keep in mind he had 306 yards passing, 46 yards rushing, and two TDs against the Bucs in last yea’rs playoff matchup.

Kirk Cousins, Vikings (at LAC). Minnesota should go run-heavy here, as the Chargers are much stronger against the pass and should get healthier at cornerback. Cousins is stepping into a messy road trap.

Ryan Tannehill, Titans (vs. NO). The passing offense underwhelmed without playing off Derrick Henry against a tough defense in Los Angeles, and Tannehill gets another tough matchup at home this week.

Teddy Bridgewater, Broncos (vs. PHI). The Eagles’ defense tends to show up against more limited offenses, so don’t assume he will even hit his floor.

Baker Mayfield, Browns (at NE). Mayfield got on track last week, but he’ll slow back down against a tough pass defense on the road.

Josh Jacobs, Raiders (vs. KC). Jacobs and the rushing attack are back to being a key part of what Vegas does, and the matchup at home is great. Kenyan Drake can also be flexed given his red-hot usage.

Leonard Fournette, Buccaneers (at WAS). The matchup might be a little tougher after a bye, but the likely game script suggests Fournette will be busy in the second half.

Melvin Gordon III, Broncos (vs. PHI). The Broncos will relentlessly stick with the run again, and Gordon should produce with at least 70 scrimmage yards and another TD.

Darrel Williams, Chiefs (at LV). Clyde Edwards-Helaire (knee) likely won’t be ready yet, and Derrick Gore didn’t prove to be a real threat. The Raiders were also smashed on the ground by the Giants last week.

Michael Carter, Jets (vs. BUF). The matchup isn’t inspiring, but his recent usage is. The return of Mike White will put Carter back on the checkdown radar when trailing.

Devonta Freeman, Ravens (at MIA). He’ll get it done as a flex with enough yards and another short score in a favorable matchup.

Jordan Howard, Eagles (at DEN). They love him again, and he’ll get the key work in their new run-heavy approach minus Miles Sanders (ankle).

Adrian Peterson, Titans (at NO). It’s true revenge game for him because he didn’t like playing for Sean Payton. You can bet he powers into the end zone again.

Javonte Williams, Broncos (vs. PHI, $5,000 on DraftKings, $5,800 on FanDuel). Williams should earn more touches to support Melvin Gordon after his monster rushing effort against the Cowboys, and the Eagles can get burned on the ground and in the short passing game.

Devin Singletary, Bills (at NYJ, $4,700 on DraftKings, $6,000 on FanDuel). We put Zack Moss here last week for a primo matchup in Jacksonville and unfortunately he got concussed. Singletary will likely be busier as a runner and receiver for this one, and he has a good shot to bring back 3x value on investment.

Antonio Gibson, Washington (vs. TB). If he was guaranteed full health after a bye, he would be a no-brainer start, but the matchup is awful and it could be a lot of J.D. McKissic.

Myles Gaskin, Dolphins (vs. BAL). He slapped together points despite a fumble last week and the matchup seems good, but that’s exactly when he will disappoint.

Mike Davis, Falcons (at DAL). You can’t go here because the Cowboys run defense won’t have another hiccup.

AJ Dillon, Packers (vs. SEA). The matchup is awesome, but he’s still not getting quite enough key touches behind Aaron Jones to deploy as more than a deep flex.

Tony Pollard, Cowboys (vs. ATL). You can go in hoping for some cleanup points behind Ezekiel Elliott, but that’s a bit of a desperation move.

Nyheim Hines, Colts (vs. JAX). You can go in hoping for some cleanup points behind Jonathan Taylor, but that really be a desperation move.

Jaylen Waddle, Dolphins (vs. BAL). He’s a no-brainer against this weak secondary with no DeVante Parker (hamstring) because he also gets love from either QB.

Jerry Jeudy, Broncos (vs. PHI). He’s really the go-to guy for Teddy Bridgewater based on routes run, and he has the most favorable alignment spot to produce.

Brandon Aiyuk, 49ers (vs. LAR). Is he totally back? We’re not sure, but this makes sense given Deebo Samuel is likely to see more Jalen Ramsey.

Hunter Renfrow, Raiders (vs. KC). Derek Carr can totally show love to him when not throwing to Kenyan Drake or Darren Waller, so Renfrow should keep rolling on the Chiefs.

DeVonta Smith, Eagles (at DEN). Let’s hope his get-well game last week sparked something. Expect the Eagles to move him around to scheme him open better like against the Chargers.

Rashod Bateman, Ravens (vs. MIN). This other rookie can keep putting up pleasing stats away from Hollywood Brown.

Emmanuel Sanders and Cole Beasley, Bills (at NYJ). They both should be busy as the Bills go back to basics to help Josh Allen light it up again.

Deonte Harris, Saints (at TEN, $4,000 on DraftKings, $5,400 on FanDuel). He was back healthy and has a strong matchup against the Titans’ secondary. Given his price, he could easily triple up value.

Russell Gage, Falcons (at DAL, $5,900 on DraftKings, $6,000 on FanDuel).  Gage operated as the No. 1 last week for Matt Ryan with no Calvin Ridley (personal) and should be able to avoid the Trevon Diggs matchup.

Juilo Jones, Titans (vs. NO, $5,400 on DraftKings, $6,700 on FanDuel). Jones looked good returning from his hamstring issue and will have a bigger role here against a familiar NFC South foe. It doesn’t hurt Marshon Lattimore figures to cover A.J. Brown more.

D.J. Moore, Panthers (at ARI). He could totally bust out of his slump that’s related to poor QB play, but that’s hard to trust given it’s more of a trend now.

Courtland Sutton, Broncos (vs. PHI). The Eagles protect against big plays downfield and can also put Darius Slay on him.

All Browns (at NE). The Browns can’t do anything for us against this secondary.

All non-Hopkins Cardinals (vs. CAR). The pass defense for the Panthers keeps playing well, and this could be another successful run-heavy game plan.

All Jaguars (at IND). Their best option is now Jamal Agnew? Eeew.

All Lions (at DET). Just because they are coming off a bye doesn’t mean you can trust anyone here.

All Jets (at BUF). The targets are being scattered, and they will be smothered and covered against a tough all-around secondary.

All Patriots (vs. CLE). The Browns’ secondary is back to domination, and there’s been nothing to see here for a while.

Dallas Goedert, Eagles (at DEN). He underwhelmed after a hot start last week and will rebound on the road as a key to beating the Broncos.

Logan Thomas, Washington vs. TB). It would be surprising if his hamstring injury kept him out again. He steps into a solid returning spot to help his QB.

Pat Freiermuth, Steelers (vs. DET). The Lions by the numbers have contained the tight end because their corners are bad, but there’s a good chance Freiermuth dents the end zone again.

Dan Arnold, Jaguars (at IND). The way the Colts play zone coverage and his expanded targets say he will be busy for Trevor Lawrence.

Tyler Conklin, Vikings (at LAC). The Chargers give up plenty to the tight end, and he can build on his high-target Week 9.

Noah Fant, Broncos (vs. PHI, $4,300 on DraftKings, $5,700 on FanDuel). The Eagles have given up the most fantasy points to tight ends, and Fant should be cleared this week to try to follow what his former Iowa teammate T.J. Hockenson did in Week 8.

Dalton Schultz, Cowboys (vs. ATL). With Michael Gallup (calf) set to return, Schultz’s role in the pecking order will dip in a terrific matchup for Dallas’ wideouts.

Hunter Henry, Patriots (vs. CLE). He’s there if you need him, but the matchup isn’t great and Henry remains TD dependent.

Tyler Higbee, Rams (at SF). The 49ers have been pretty good against tight ends, as it’s become easier to exploit them with backs and wide receivers.

Jared Cook, Chargers (vs. MIN). He’s sharing key targets with Donald Parham Jr., and the matchup isn’t good given Mark Andrews was contained by the Bolts in Week 9.

Cowboys (vs. ATL). They were terrible last week, but they will overcorrect and clean up enough against Matt Ryan this week.

Saints (at TEN). New Orleans bounces back in a great matchup in Nashville.

Eagles (at DEN). They will get after the QB pretty well against a banged-up offensive line and should pressure Teddy Bridgewater into some giveaways.

Chargers (vs. MIN). The Vikings can run on L.A., but here’s feeling a massive mistake by Kirk Cousins at some point.

Browns (at NE, $2,800 on DraftKings, $4,500 on FanDuel). The Browns’ defense showed up in full playmaking force in Cincinnati and should keep it up against Mac Jones. This figures to be an ugly battle of attrition.

Rams (at SF). The 49ers don’t really give up a lot, and it’s tough to trust the Rams in prime time on the road after the Titans’ mess.

Broncos (vs. PHI). The Eagles’ offense might not feel like it can do damage in Denver, but in general its doesn’t give up many fantasy points to D/STs.

Raiders (vs. KC). The numbers might say yes, but Patrick Mahomes will change all of that this week in a big way.

Titans (vs. NO). The Saints can be careful with the ball with Trevor Siemian, and Tennessee isn’t good enough to repeat the surprise Week 9.

Packers (vs. SEA). A reminder once again that Russell Wilson is back for the Seahawks.

Get more of Vinnie Iyer’s in-depth fantasy football advice for Week 10 by subscribing to the Locked On Fantasy Football podcast.