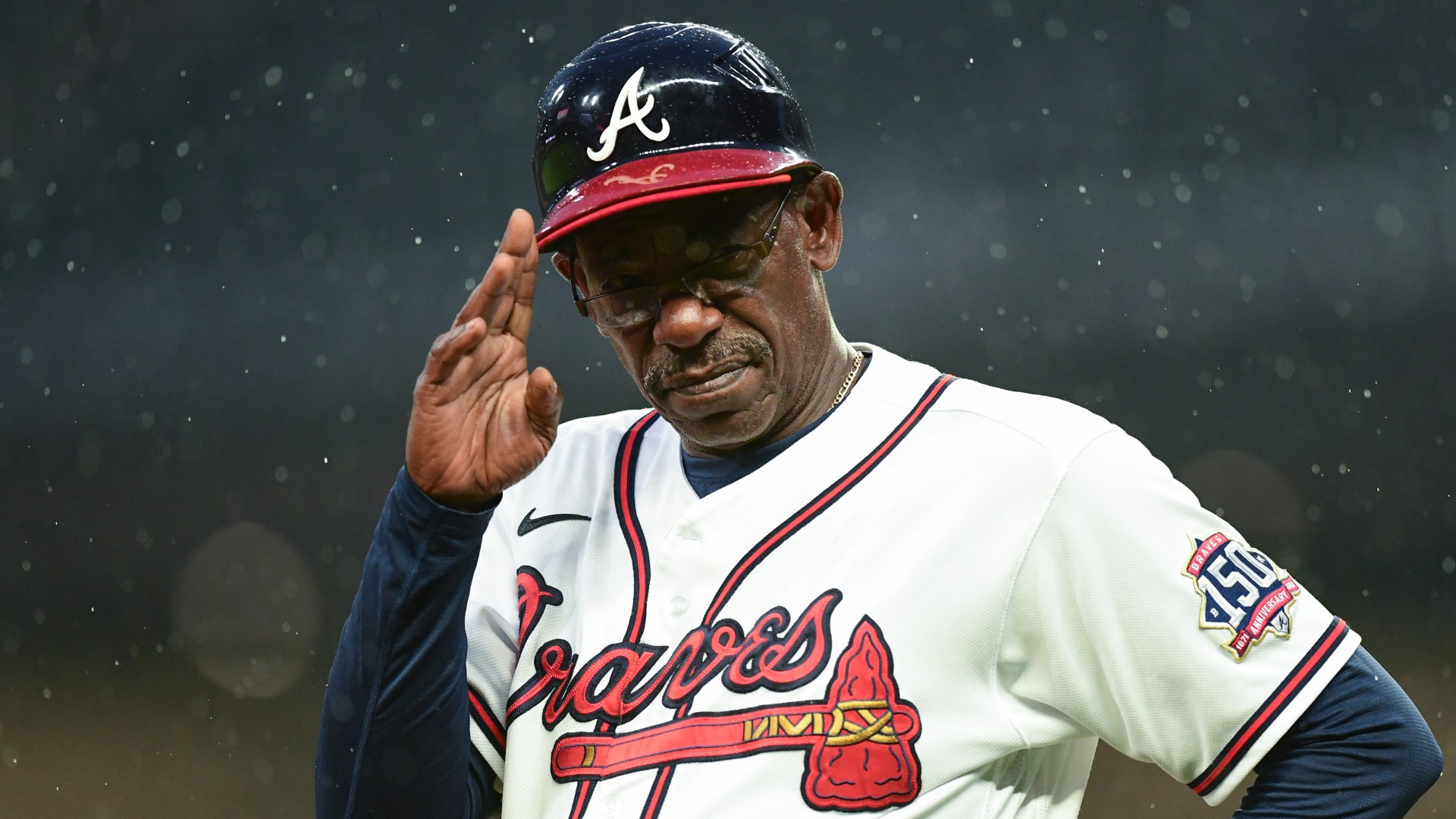 His impact on the World Series champion Atlanta Braves was undeniable, and it wasn’t just the pregame fungo routine that helped his infielders fine-tune their preparation every single day or his work as the third-base coach. No, the impact goes much deeper than that.

Manager Brian Snitker has long been an even-keeled, keep-your-cards-hidden constant for Atlanta, a personality trait that was especially important as his ball club tried to keep its head above water during the turbulent first half of the 2021 season.

At the same time, Washington’s inspirational speeches were the perfect complement to the manager’s calm.

“He would said, ‘We’re going to get hot, guys. Just weather the storm,” Atlanta first-base coach Eric Young said while standing near the visitor’s dugout at Minute Maid Park about an hour after the Braves clinched the 2021 World Series.

FOSTER: For world champion Braves, “wait till next year” can have new, joyous meaning

Young was only too happy to talk about Washington’s impact on the club. There was one speech in particular, right before the start of the World Series, that stood out to Young.

“He said, ‘I just want to say thank you,’” Young said, eyes full of emotion as he recalled the moment. “He handed out sheets that said ‘Thank You’ and he explained what he was thanking them for. It was powerful. He said the two words, ‘Thank you.’ Oh my God. It was so strong. As a coach, he made me want to go out there and play, that’s how strong it was.”

Washington is 69 and just finished his fifth year on the Atlanta coaching staff. He knows Oakland well; he was on the big league coaching staff from 1996 to 2006, when the Rangers hired him as their manager. His eight-season stint as the Texas manager was a rousing success; he led the club to two World Series — the only two in franchise history — and four 90-plus win seasons. He resigned late in the 2014 season, citing personal issues he needed to address.

The World Series championship with the Braves was the first in a baseball career that started in 1970, when he signed with the Royals as an amateur free agent at 18 years old.

Washington made the bigs for the first time in 1977 and played his final MLB game in 1989. His move into coaching was a smooth transition; he’s a teacher by nature.

“When you have someone like Wash, he makes it fun and you want to work,” Freddie Freeman told Sporting News before a game in St. Louis in August. “That’s the big element to this. He makes you want to come out here today. The joy and love he has, helping players get better, that’s what makes us come out every single day.”

Sound like what they need in Oakland, right? The A’s just let successful and respected manager Bob Melvin leave for the Padres’ job, and morale isn’t sky-high there at the moment. Washington is the perfect candidate to inject joy and belief into that organization.

“I’ll tell you, I’ve been around some great people, some great managers,” Young said. “I’ve played for some great managers. I just know that he brings an element that is really needed, even with today’s players, in today’s game. This is a guy that can adapt to any situation, has been in a lot of situations, and I just think he has the right karma with players. When he walks in a room and starts talking, he commands respect. If any team is out there looking for a leader, he’s a tremendous leader, no doubt. Think about his success, his record in Texas, and his relationships in Oakland with the players there. The players are the ones who are going to let us, as coaches, know how they feel about us. That’s something we talk about all the time. And when you listen to what the players say, that’s when you should really understand this guy is someone who can lead a team. We had our leader, Freddie, say, ‘I’d hate to lose him, but this guy deserves to manage a team.’”

MORE: 21 reasons why the Braves’ 2021 championship was so very unexpected

Before Game 3 of the World Series, Freeman was asked directly about the potential of Washington being offered the A’s job, and his reply was honest.

“I’d say that man deserves it. That man, I don’t want him to leave, but he deserves every opportunity if a managerial job opens up for him,” Freeman said. “He’s an unbelievable leader. He has the enthusiasm. He has the drive to win. … He loves coaching. He loves just bringing young men up and just being the better of themselves. As much as I want Wash to stay, if someone came calling, he’d be the first on my list.”

Here’s a great example of Washington’s impact on his players and his team. Before the first game of that early August series in St. Louis, Washington was going through his daily infield pregame workouts. Ozzie Albies was the last infielder up that day. When Albies came trotting out of the dugout, Washington said, “What state are we in?”

Washington followed with “And what is Missouri?”

At this point, Young walked up the dugout stairs. “EY, tell him where we are.”

Young laughed and yelled out, “The Show-Me State!”

Albies laughed, immediately remembering what they’d been talking about earlier.

Washington laughed that unmistakable laugh of his, “That’s right! Now show me.”

And they started their drills, every few minutes Washington asking “Where are we?” And Albies bellowing out, “The Show-Me State” for everyone in the stadium to hear.

“Wash is so good at educating players as well,” Young said. “That was like a test for Ozzie, Wash started naming the important part of a state, or the nickname of a state. So we were in St. Louis and he asked Ozzie something and he said, ‘Do you know?’ And Ozzie said no. Wash said, ‘Don’t talk about it, this is the Show-Me State. If you can’t show us, don’t talk about it.’”

That became a thing for the club.

“We kept going around and other players started hearing about it and everything, and it just became, ‘OK, show me. I’m going to show you.’ Those guys went about their business by showing us. That was the start. That was the big series, going into St. Louis and beating them three times. C’mon, that doesn’t happen.”

The Braves snapped their 18-game streak of alternating wins and losses with a sweep of the Cardinals in St. Louis. From there, they won 13 of their next 15 games. They were in third place, 4 1/2 games back of the Mets entering the series under the Arch. By the end of that stretch — their nine-game winning streak ended with a sweep in Baltimore — the Braves were in first place, 4 1/2 up on the second-place Phillies.

“You had to be in the clubhouse and travel with us to understand when things weren’t going well to understand how beautiful it is to be where we are,” Washington said after Game 6 of the World Series. “Those guys, their attitude, their commitment, their effort, it never wavered. It never wavered. There was a point in the year where we looked at the teams in front of us and we’d just destroyed them, and we said, ‘Those guys have got no business in front of us. We’ve go to start getting our game together,’ and we did. Once we got in the lead, we never looked back.”

Washington and his players did, indeed, show everyone what they were capable of.

And Oakland would be foolish not to hire Washington and give him a chance to show A’s fans the type of impact he can have on a franchise.