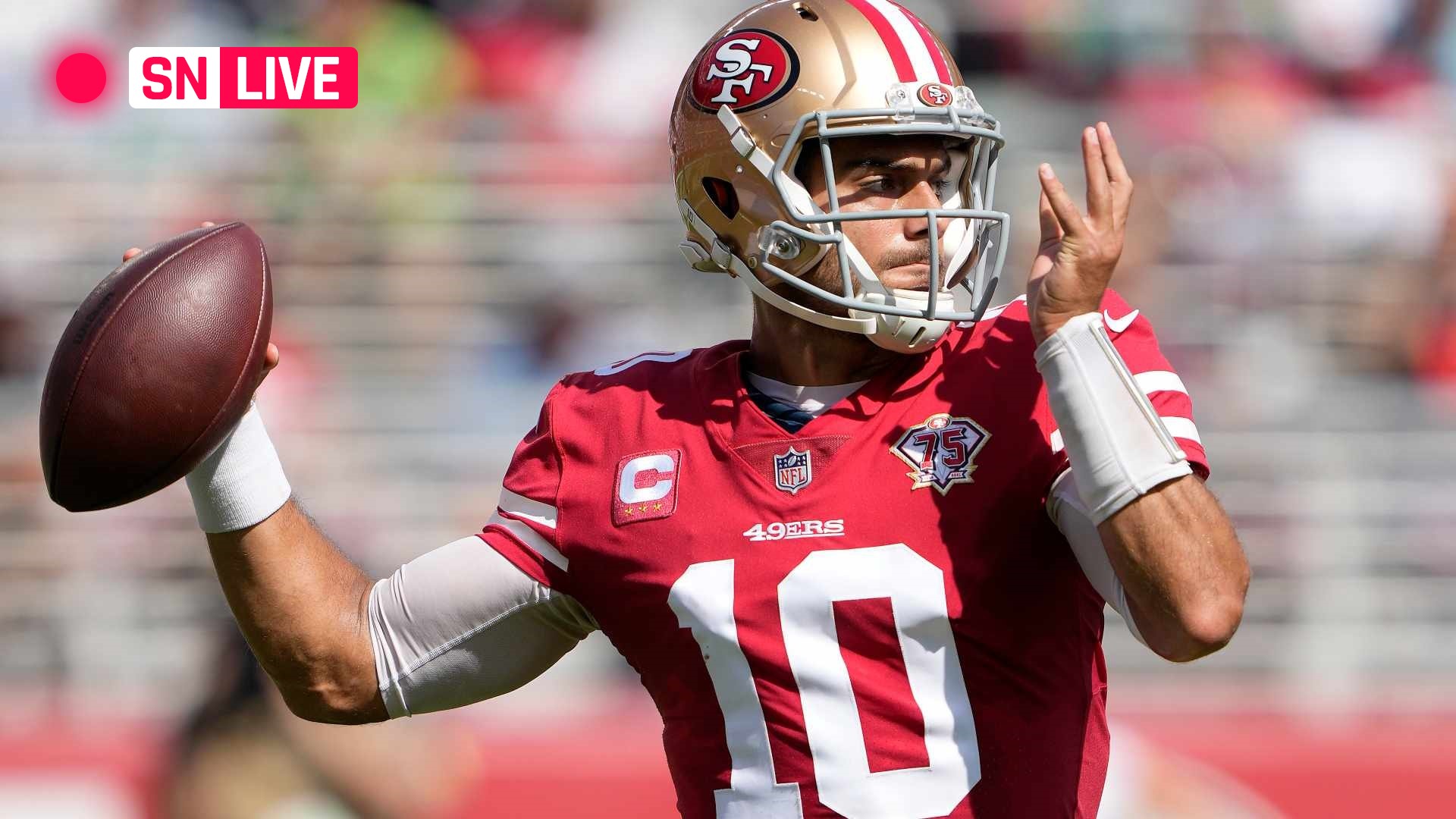 Jimmy Garoppolo is back for Sunday Night Football’s primetime matchup against the Colts.

The veteran quarterback returned to the 49ers practice this week after suffering a calf injury in Week 4. Rookie Trey Lance took over during the 17-10 loss to the Cardinals but suffered a knee sprain that would prevent him from starting in the Week 7 matchup.

Before exiting the field during the 49ers’ 28-21 loss to the Seahawks, Garoppolo totaled 925 passing yards with five touchdowns. He took advantage of the bye week following Lance’s start to effectively prepare for the start against the Colts.

Carson Wentz will look to extend the Colts winning streak on the road. While he totals 1,545 passing yards with nine touchdowns and one interception, Wentz will rely on the rushing game against the first-ranked defense in the league. Running back Jonathan Taylor has the chance to continue his hot streak after totaling 145 yards and two touchdowns against the Texans.

The forecast for Sunday’s primetime matchup may affect both teams’ passing. According to the National Weather Service, the matchup will take place during harsh conditions. While the area is under wind advisory until 8:00 p.m. PT, showers are expected with possible thunderstorms throughout the evening. Depending on the severity of the wind, both quarterbacks may struggle to make their targets.

Sporting News is tracking live scoring updates and highlights from 49ers vs. Colts on “Sunday Night Football.” Read below for complete results from the NFL’s Week 7 game.

11:19: Garoppolo tosses the ball and loses control, allowing Khari Willis to make the interception and seal the 49ers’ fate.

11:10: TOUCHDOWN COLTS. Wentz finds Michael Pittman Jr., who leaps into the end zone for the score. After the extra point, the Colts extend their 30-18 lead with 2:49 remaining.

11:05: Xavier Rhodes picks off a pass from Garoppolo and steps out of bounds at the 39 before rushing to the end zone. Colts take over from the 39 with 5:13 remaining.

10:58: Wentz gets past the first down marker, but a holding penalty against Matt Pryor forces the Colts back 10 yards on third down.

10:53: Wentz finds Pittman to convert on third down and put the Colts at midfield.

10:42: Garoppolo connects with Deebo Samuel for 29 yards and Charlie Woerner for 27 yards to open the fourth quarter.

10:33: The 49ers go third and long and punt, allowing the Colts to take over in the final minutes of the third quarter.

10:28: TOUCHDOWN COLTS. Jonathan Taylor rushes outside into the end zone for the score. The carry helps the running back to 102 yards, and extends the Colts’ 20-12 lead with 3:45 remaining in the third quarter.

10:26: Jaquiski Tartt rushes to defend Michael Pittman just before the goal line and gets called for a pass interference penalty. The Colts get a fresh set of downs inside the San Francisco five.

10:20: Garoppolo loses control of the ball in the pocket, marking the Colts’ fourth forced fumble of the night.

10:19: After going 0-for-7 on third down, Garoppolo completes to Sanu for a 16-yard gain and a first down. Garoppolo barely avoids a sack on the following play.

10:05: The Colts decide to go for it on fourth down and inches from midfield. Jonathan Taylor makes the carry for a first down, but Norman punches the ball loose. Ashton Dulin recovers the ball for Indianapolis. Shanahan throws a challenge flag on the play.

10:03: Colts start the second half with possession.

9:43: TOUCHDOWN COLTS. Carson Wentz keeps the ball and rushes unto the end zone for the score on third down. He fails to complete on the two-point conversion but gives the Colts a 13-12 lead with a minute remaining in the half.

9:40: Emmanuel Moseley is called for a pass interference penalty in the end zone while covering Pittman. Colts get a fresh set of downs at the one-yard line.

9:35: Deebo Samuel makes the catch on a pass from Garoppolo, but Darius Leonard punches the ball loose. The Colts recover and take over at the 49ers’ 29.

9:32: Wentz completes to Taylor on third down, but he’s taken down before the line of scrimmage. Colts punt and allow the 49ers to take over at the 20.

9:28: Garoppolo throws another incomplete pass to force the 49ers go three-and-out and punt for the third consecutive drive. Colts take over at the 20.

9:23: Brandon Aiyuk returns for the 49ers and muffs the ball in the end zone. After official review, the play is ruled as a touchback and allows the 49ers to take possession from the 20.

9:22: Wentz targets Nyheim Hines on third down, who was wide open past the first-down marker, but he drops the ball and forces the Colts to punt.

9:15: The rain starts to come down harder as the 49ers are forced to punt for the second consecutive drive. Colts take over at the 18.

9:12: Wentz throws consecutive incomplete passes that were almost picked off by Emmanuel Moseley. Colts are forced to punt for the first time to give the 49ers possession at the 10.

9:06: Carson Wentz is brought down by Nick Bosa and loses control of the ball. Azeez Al-Shaair makes the interception for the 49ers at their own six-yard line. The pick marks Wentz’s second interception inside an opponent’s 10-yard line this season.

9:01: Jonathan Taylor breaks free and makes a 33-yard run to put the Colts just outside the goal line to start the second quarter.

8:58: Josh Norman comes close to intercepting a pass from Wentz on second down. Wentz throws deep and a pass interference penalty against K’Wuan Williams gives the Colts a fresh set of downs from the San Francisco 35.

8:40: Michael Pittman Jr. makes a 57-yard catch on a pass from Wentz to bring the Colts to the 49ers’ 19. Pass interference was called against the 49ers on the play, but the penalty was declined after it was ruled a fair catch.

8:30: Josh Norman punches the ball loose from Jonathan Taylor, forcing the second turnover of the Colts running back’s career. Fred Warner recovered for the 49ers to take over from the Colts’ 28.

8:28: TOUCHDOWN 49ERS. Mitchell carried the ball 14 yards to put the 49ers on the board in their opening drive. He totaled five carries for 57 yards on the scoring drive. After Joey Slye missed extra point, 49ers lead 6-0 with 10:12 remaining in the first quarter.

As usual, the “Sunday Night Football” matchup will be on NBC. After a hiatus last week, Al Michaels will be back on play-by-play, with Cris Collinsworth providing analysis and Michele Tafoya reporting from the sidelines. Terry McAulay will be the rules analyst on the broadcast.

For those hoping to stream the matchup, NBC will carry the game on its streaming platform, Peacock. Prospective viewers can also find it on fuboTV, which offers a 7-day free trial .

WEEK 7 NFL PICKS: Straight up | Against the spread