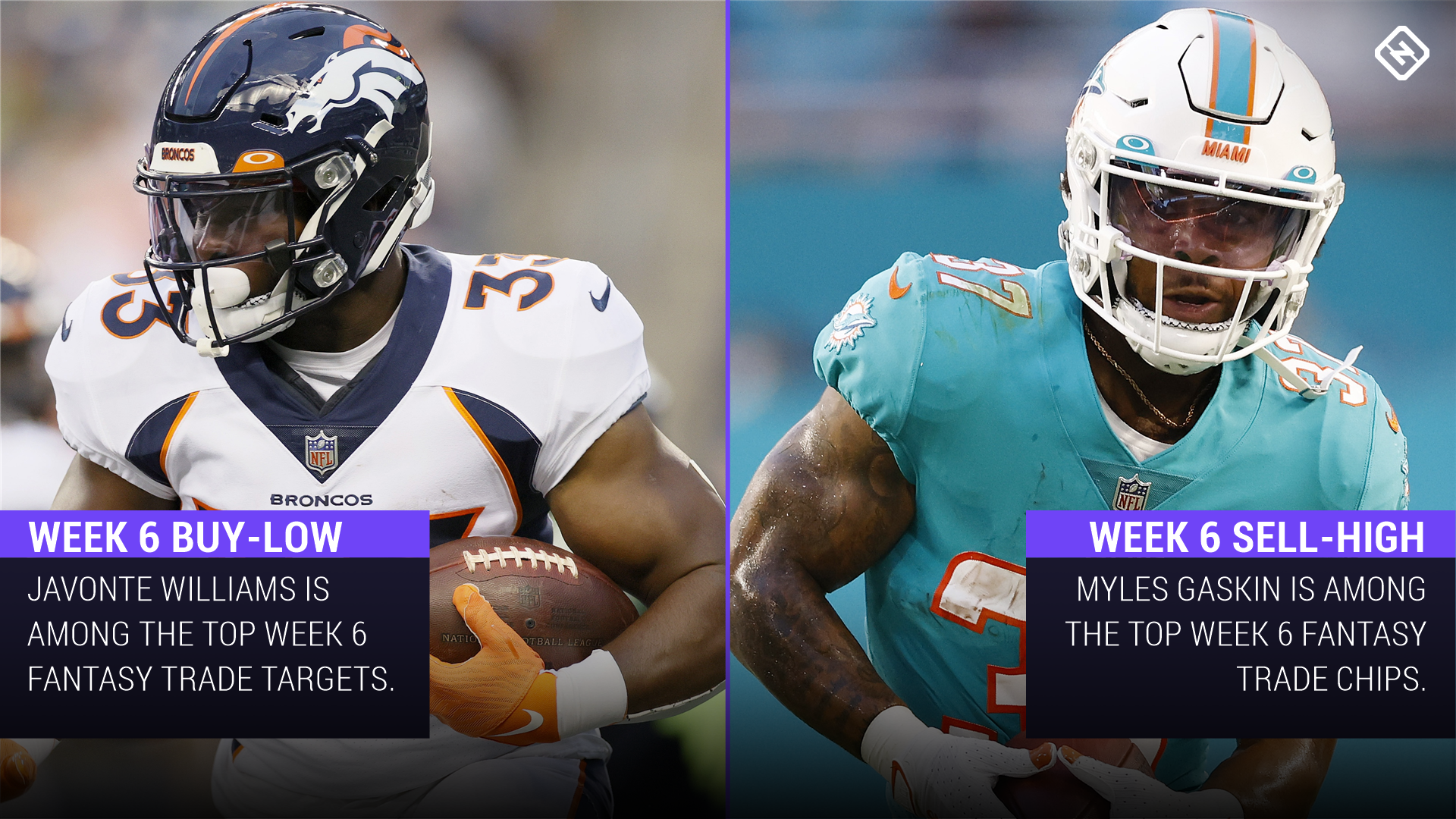 The injuries are mounting and the bye weeks are officially here, so it’s time for fantasy football owners to start making some moves. It might seem “early,” but we’re over a third of the way through the fantasy regular season. If you’re falling behind in the standings, you can’t wait for your team to magically get it together and start winning. You might have a string of favorable matchups lined up because of bye-week issues for your opponents, but you can’t count on that. Chances are, you need to upgrade at least one or two players, so identifying buy-low, sell-high trade targets is important. As always, FantasyPros is here to help with tips and trade advice in their Week 6 Stock Watch that includes Javonte Williams, DeVonta Smith, Chase Claypool, Myles Gaskin, and Brandon Aiyuk, among others.

The byes make it tougher to trade, as savvy owners are constantly trying to juke the schedule by trading for a player who’s already been on a bye while giving up a player that hasn’t. Savvier owners will refuse to do that, so you’re often at a stalemate. If you have a solid record and good depth, don’t be afraid to take on a player who’s yet to be idle. It’s a market inefficiency that can result in better overall players for the stretch run. This is obviously risky if you’re sitting at 2-3 right now, but if you’re 4-1 or 5-0, it’s all about setting yourself up with the best starting lineup possible for Weeks 15-17. You don’t want to sell out all of your depth, but the waiver wire should help you fill that in as the season goes along.

Don’t forget that trade values can change quickly in fantasy football, so don’t get too locked in on a specific target. Change your thinking as the trends change, but don’t be afraid to strike if you have a good offer on the table, even this early in the season. — Matt Lutovsky

The rookie was once again more efficient than Melvin Gordon last week, rushing eight times for 61 yards and hauling in three receptions for 25 yards. The timeshare remained a 50/50 split, however, which makes Williams tough to start in Week 6. However, fantasy owners who can afford to be a little patient should be willing to “buy low” on the rookie. We know that first-year players, as a whole, often improve in fantasy as the year moves along. Securing Williams’ services now before a potential breakout game could be fruitful.

Smith had a solid performance in Week 5 against Carolina – catching seven passes for 77 yards. He hasn’t found the end zone since Week 1, but the underlying usage is very promising. On Sunday, the rookie ran a route on 96 percent of his team’s passing plays while demanding a 30-percent target share and 31-percent air yards share. The Panthers’ defense held the Eagles in check for a lot of this one. Bigger days are coming for Smith moving forward.

Gaskin saw just two touches in Week 4. In Week 6, he received 10 target, catching all 10 balls thrown his way for 74 yards and two TDs. Gaskin added team-high five rushes for 25 yards on the ground. Miami’s backfield has been impossible to predict on a week-to-week basis. This sets up as a tremendous “sell-high” opportunity.

The sophomore wideout totaled two receptions for 32 yards in Week 5, both of which were his second-highest marks of the season, sadly. Aiyuk’s snaps have been trending in the right direction recently, but the targets haven’t followed. It will be difficult to roster him through bye-week crunches unless something changes in a hurry.

It’s tough to invest in the Pittsburgh passing attack with the way Ben Roethlisberger is playing right now, but Claypool’s talent has been undeniable ever since he broke out as a rookie in 2020. The 23-year-old freak totaled 130 yards and a touchdown on five receptions against Denver in Week 5. Since Week 1, he has had over a 22.5-percent target share in all three games that he has played. Roethlisberger’s play is concerning enough to keep Claypool from being a “buy” entering Week 6, but JuJu Smith-Schuster (shoulder) out for an extended amount of time, Claypool should see even more targets.