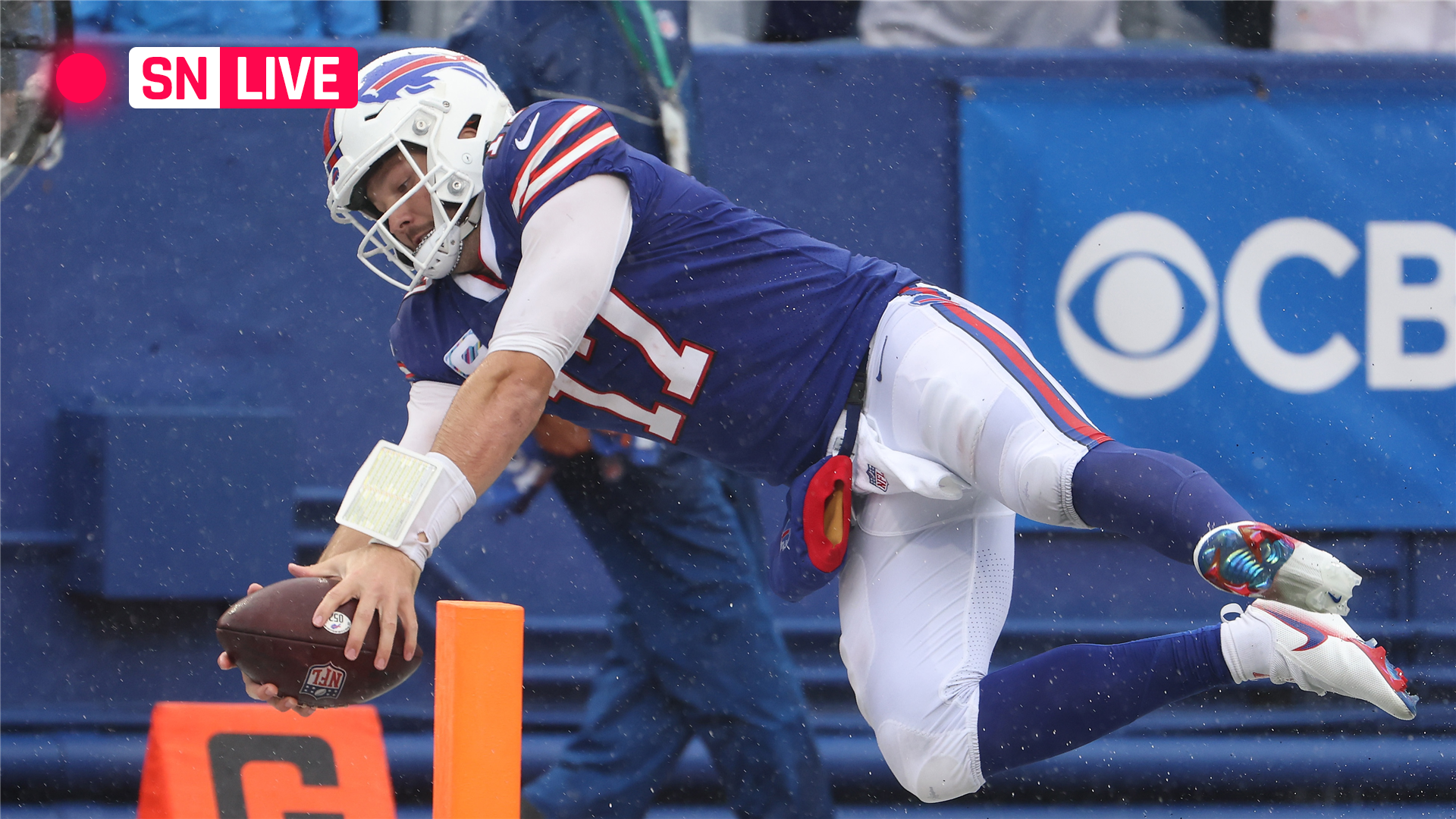 It’s roughly a quarter of the way through the NFL season and Buffalo and Kansas City look like two very different teams.

The Bills are one of, if not the most complete team in football. Behind Sean McDermott and Co., they rank in the top-five in total offense and rank first in defense, having pitched two shutouts and yielding just 11 points per game. They also have seven interceptions, four forced fumbles and 12 sacks through five games, proving their defensive prowess.

Their offensive unit has been equally as good, scoring the second-most points through four week as quarterback Josh Allen is the team’s third-leaeding rusher. Allen has also spread the ball around, with five different players in doubl digits for targets up to now.

Kansas City, meanwhile, has been fine offensively. Like Buffalo, the Chiefs have scored 134 points through four games, but they sit at 2-2 and in last place. Buffalo is 3-1 and atop the AFC East.

The Chiefs’ offense has flowed through Patrick Mahomes, who’s first in passing touchdowns and fifth in yards. But Mahomes has really only targeted Travis Kelce and Tyreek Hill, with no clear No. 2 or 3 receiver standing out. That’s why they added veteran former All-Pro Josh Gordon to their roster.

Defensively however, the Chiefs have been one of the worst teams, giving up the second most points through four weeks and allowing roughly 438 yards per game.

This is a game with potentially big playoff implications down the line for two teams who were potential Super Bowl favorites. There’s a lot of season left, and this game might be a shootout, but it’s one that seems like a must-win for both teams.

Sporting News is tracking live scoring updates and highlights from Bills vs. Chiefs on “Sunday Night Football.” Follow below for complete results from the NFL Week 5 game.

This is Buffalo’s 14th straight game with a halftime lead, the NFL record. They got the lead thanks to a dominant showing from Josh Allen, who’s the team’s leading rusher with 41 yards. He also has 214 yards through the air and two touchdowns on just seven completions.

Patrick Mahomes is the leading rusher for the Chiefs with 52 yards.

9:59 p.m.: Kansas City sends out Harrison Butker for a 54-yard field goal after Mahomes’ pass falls short on third down.

9:57 p.m.: It’s third-and-12 for Kansas City from the Buffalo 36 with 11 seconds left in the first half. Both teams trading timeouts at the moment.

9:55 p.m.: Josh Gordon gets hit for an offensive penalty and it drives KC back 10 yards and brings up first-and-20 from the Buffalo 44.

9:53 p.m.: There’s an official review on a throw from Mahomes to Mecole Hardman that was initially ruled out of bounds by Hardman.

9:44 p.m.: TOUCHDOWN BUFFALO. Allen rolls out and evades pressure. He heaves a rocket downfield to a wide open Knox who takes it 53 yards for the score. Buffalo 24, Kansas City 10 with 1:16 left in the half.

9:36 p.m.: The Bills kick it out of bounds after the field goal, meaning Kansas City sets up shop at its own 40.

9:33 p.m.: Buffalo got well within striking distance but couldn’t find the end zone, so they bring Tyler Bass out for a 30-yarder.

9:24 p.m.: Kansas City goes three-and-out following the Buffalo TD and fails to respond right away. Chiefs punt it away to the Bills 26 yard line.

9:20 p.m.: TOUCHDOWN BUFFALO. The Bills and Chiefs trade touchdowns as Allen finds Emmanuel Sanders for 35 yards to retake the lead. Buffalo 14, Kansas City 10 with 7:45 left in the first half.

9:17 p.m.: After the Kansas City touchdown, Buffalo is marching. The Bills convert on third-and-2 from the Buffalo 33. Allen to Stefon Diggs for 8 yards does the trick.

9:12 p.m.: TOUCHDOWN KANSAS CITY. The Chiefs originally lineup for a trick play but ultimately Mahomes hits Byron Pringle for the 5-yard score and KC retakes the lead. Kansas City 10, Buffalo 7 with 10 minutes left in the first half.

9:10 p.m.: The Chiefs are marching following the catch by Gordon. Looking at first-and-goal from the Buffalo 5.

9:07 p.m.: Mahomes finally goes back to the air and hits the newly-acquired Josh Gordon for 11 yards and an easy first down.

9:06 p.m.: Buffalo gets hit for a defensive holding penalty. It’s the ninth penalty of the game so far and it brings up a first down for the Chiefs.

9:02 p.m.: The Chiefs get called for a penalty, their fourth so far. This one ends the first quarter. Kansas City will come out for the second looking at second-and-14 from their own 41.

9:01 p.m.: Kansas City continues to run the ball in the first quarter, already 11 carries to nine passes here in the final seconds of the quarter.

9:00 p.m.: Mahomes keeps it again for a first down, gaining the four yards he needed. Ball on the KC 30 for the Chiefs.

8:56 p.m.: Buffalo’s punt goes into the end zone for a touchback as nothing comes of the great field position. Kansas City starts at its own 25.

8:53 p.m.: Josh Allen gets called for intentional grounding. Sets up fourth-and-29 for the Bills from their own 47 following the penalty and they punt it away.

8:50 p.m.: On the kick return following the TD, Buffalo forces a fumble of Byron Pringle and recovers it. It’s their 12th takeaway of the game and they take over at the Chiefs’ 34.

8:45 p.m.: TOUCHDOWN BUFFALO. Josh Allen gets a 9-yard rushing TD, his first of the game. The Bills ran it six times on that drive, three times by Allen. Buffalo 7, Kansas City 3 with 4:36 left in the first.

8:43 p.m.: Allen finds tight end Dawson Knox wide open way down the field and the two connect for 23 yards to the Kansas City 22.

8:42 p.m.: Josh Allen scrambles and takes off for 32 yards on Buffalo’s second play of the game. The Bills are already across midfield.

8:31 p.m.: The Chiefs get bailed out yet again on third down as Buffalo draws another penalty on third down, its second so far. First-and-10 from the Bills’ 28 for KC.

8:29 p.m.: Kansas City converts on another third down.

8:26 p.m.: As the pocket collapses, Mahomes looks for new acquistion Josh Gordon. Instead, Mahomes takes off and runs for the first down to cross midfield.

8:25 p.m.: Patrick Mahomes hits Tyreek Hill for 12 yards on third down to march to the Chiefs’ 43 and reset the downs.

The Bills-Chiefs game will kick off at 8:20 p.m. ET. The game will be at Arrowhead Stadium in Kansas City, Mo. As such, the local kickoff time will be 7:20 p.m. ET.

The “Sunday Night Football” matchup will feature the usual broadcast team of Al Michaels on play-by-play, Cris Collinsworth providing analysis and Michele Tafoya reporting from the sideline. Terry McAulay will be the rules analyst for the game.

Those tuning in to NBC earlier will catch “Football Night in America,” hosted by Mike Tirico and Maria Taylor, with Tony Dungy, Drew Brees, Chris Simms and Mike Florio in studio to provide analysis with Jac Collinsworth and Rodney Harrison reporting from the field at Arrowhead Stadium.