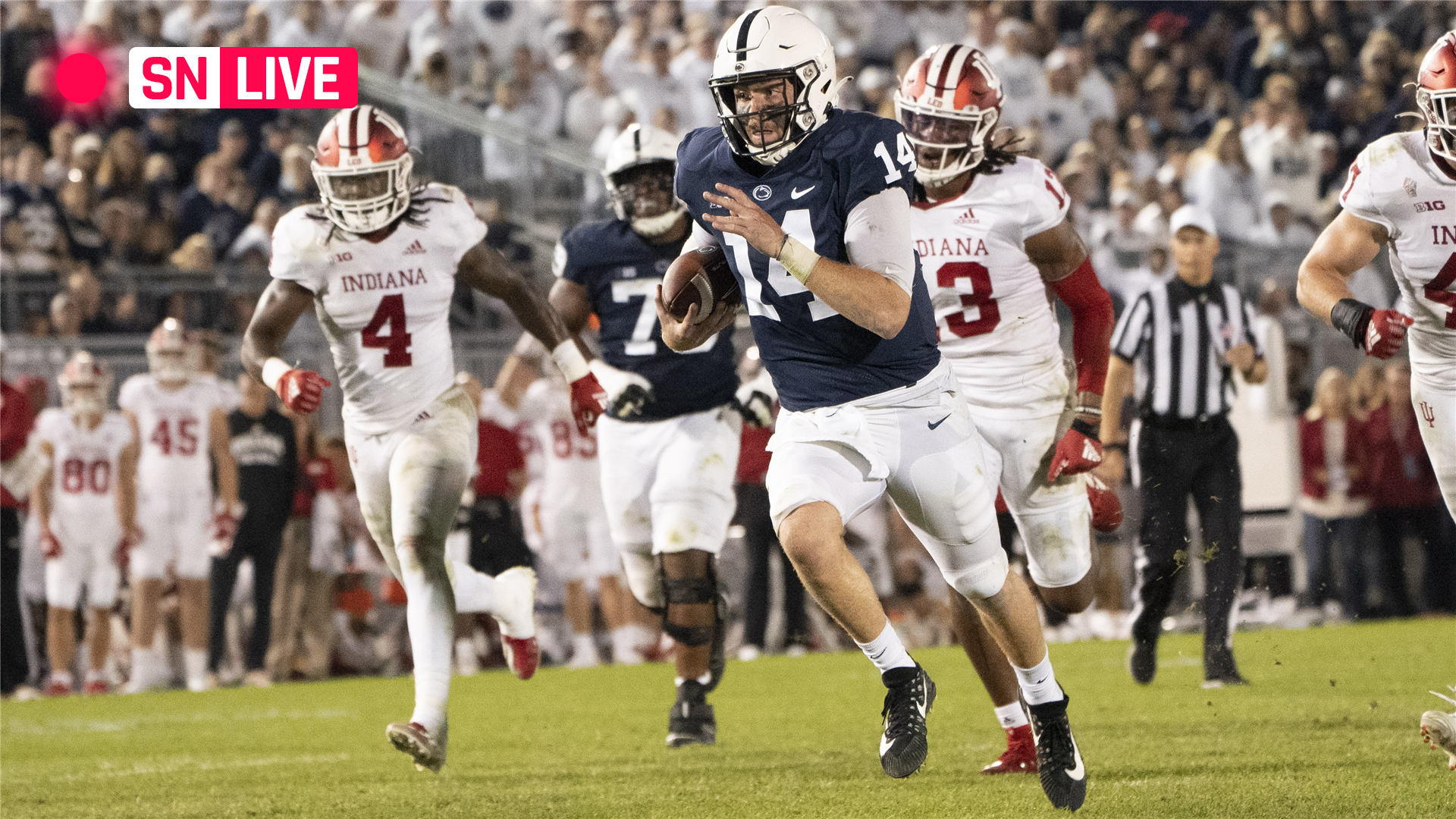 The last time Penn State took on Iowa, the Hawkeyes routed the Nittany Lions at Beaver Stadium. That was Penn State’s fifth straight loss to open last season, but since then, both teams have been among the best in college football.

Iowa has won 11 straight games and is ranked No. 3 coming into this year’s showdown with Penn State, while the Nittany Lions have won nine in a row and are ranked No. 4. Saturday’s game will be the first matchup between two top-five Big Ten teams not named Michigan or Ohio State since 1962.

The 31st meeting between the two schools is arguably the biggest game of the last several years for longtime Iowa coach Kirk Ferentz. The No. 3 ranking is the program’s highest since being ranked No. 3 in Week 12 of the 2015 season. An Iowa win would likely give the Hawkeyes a clear shot at the Big Ten West division title and a berth in the Big Ten title game, which could then lead to a playoff berth.

An Iowa loss would reinforce the narrative that Ferentz can’t beat Penn State at home, with the Nittany Lions having won each of their last three games at Kinnick Stadium. It would also suggest that Iowa climbed up the rankings because of an easy schedule.

Penn State leads the all-time series 17-13, and the Nittany Lions have scored an average of 24.1 points per game against the Hawkeyes and defeated them by an average of 6.5 points.

Sporting News is tracking live scoring updates and highlights from Penn State vs. Iowa on Saturday. Follow along here for complete results from the Week 6 college football game.

7:37 p.m.: INTERCEPTION IOWA. The Hawkeyes register their fourth pick of the game, and this one seems to be the nail in the coffin. Hawkeyes have first-and-10 from the Penn State 25 with 2:10 left in the game.

7:35 p.m.: Roberson finally tests his arm but overthrows three straight receivers and the Nittany Lions go for it on fourth-and-10 from their own 8.

7:32 p.m.: The Hawkeyes and Nittany Lions trade three-and-outs and Iowa punts it away from its own 48. Penn State takes over at its own 6 yard line.

7:19 p.m.: Iowa takes over in Penn State territory following Stout’s punt from his own end zone. First-and-10 for the Hawkeyes from the Penn State 44.

7:17 p.m.: Penn State gets driven back even more on an illegal chop block penalty followed by a false start. It’s now third-and-29 from the Penn State 6 and the offense under Roberson just can’t get anything going.

7:04 p.m.: The Nittany Lions quickly punt it away out of the endzone. Stout boots it and Iowa starts at its own 50.

6:56 p.m.: The fourth quarter is off to a hot start for the Hawkeyes thanks to a 12 yard carry for Goodson. Well across midfield and marching.

6:50 p.m.: The final play of the third quarter is a 7 yard run by Charlie Jones. Fourth quarter starts with Iowa looking at second-and-3 from their own 22.

6:49 p.m.: The Nittany Lions’ drive goes nowhere quickly and Iowa takes over at its 15 after the punt.

6:47 p.m.: Penn State takes over at its own 25 as the Nittany Lions look to respond with a score of their own.

6:41 p.m.: On third-and-7, Iowa tight end Sam LaPorta hauls it in for 8 yards despite having a defender draped all over him.

6:37 p.m.: Goodson with rushes of 8 and 3 yards to open the drive for Iowa following the field goal.

6:29 p.m.: FIELD GOAL PENN STATE. Jordan Stout nails the 44-yarder for Penn State and it’s back up to a two score game. Penn State 20, Iowa 10 with 6:40 left in the third. That last Penn State drive was 11 plays and 42 yards but only took about three minutes off the clock.

6:27 p.m.: Penn State really pushing the tempo and the pace and the Nittany Lions are already at the Iowa 15.

6:21 p.m.: Penn State’s defense comes up with a stop and Iowa punts it away to the Penn State 32. First down coming up for the Nittany Lions.

6:14 p.m.: Penn State goes three-and-out and punts it away. Iowa takes over on its own 7 following a penalty.

6:12 pm.: The Nittany Lions take over from their own 25 following the touchback to begin the third.

6:11 p.m.: Penn State is slated to receive the kickoff here to start the third quarter. Looks as though Sean Clifford’s day is over as he’s in street clothes.

5:50 p.m.: Penn State calls a timeout facing third-and-18 from its own 4 and the Nittany Lions knee it out to end the half.

5:46 p.m.: Iowa’s interception can’t be capitalized on and the Hawkeyes punt it away to the 11 yard line where Penn State takes over.

5:43 p.m.: IOWA INTERCEPTION. Iowa’s third pick of the day is a big one on an overthrow by Roberson. Iowa takes over at its own 45 with 1:31 left in the first half.

5:41 p.m.: With the two-minute warning approaching, Iowa punts it away to the Penn State 3. Nittany Lions take over with 2:11 left backed up to their own endzone.

5:39 p.m.: Iowa is quickly across midfield as Petras hits tight end Luke Lachey for 11 yards to the Penn State 46.

5:34 p.m.: Sean Clifford out of the game at the moment for Penn State. Backup Ta’Quan Roberson is in and this drive has been about as bad as any Penn State’s had. Third-and-24 for Penn State from its own 11 and the Nittany Lions get hit for another false start.

5:19 p.m.: Petras makes a great throw after being leveled. Chucks it 21 yards to Nico Ragaini and the Hawkeyes are back in the red zone at the Penn State 16.

5:13 p.m.: On third-and-3, Penn State gets flagged for defensive pass interference and it gives Iowa 15 yards and puts them close to midfield.

5:08 p.m.: FIELD GOAL PENN STATE. The Nittany Lions’ trip to the red zone results in three points and they extend their lead with 12:31 left in the first half. Penn State 17, Iowa 3.

4:57 p.m.:  Clifford hits the running back Noah Cain out of the backfield for 9 yards to the Penn State 48 to end the first.

4:55 p.m.:  Iowa goes three-and-out and punts it away from its own 41-yard line. Dotson lets it bounce into the end zone for a touchback and Penn State takes over at its 25.

4:50 p.m.:  Jaquan Brisker down on the field for Penn State after tackling Iowa’s Tyler Goodson, who managed a 20-yard run.

4:44 p.m.:  Clifford hits KeAndre Lambert-Smith in stride for 30 yards. Lambert-Smith banged up and down on the play as the game heads to a TV timeout.

4:41 p.m.:  IOWA INTERCEPTION.  Clifford is picked off for the second time this quarter, this time on a deep ball to Jahan Dotson. Iowa takes over at its own 20.

4:33 p.m.:  Penn State gets its second sack of the game as Curtis Jacobs drops Iowa’s Spencer Petras for a loss of 2. Brings up third-and-13 for Iowa from its own 22 as the Hawkeyes go three-and-out.

4:26 p.m.:  Iowa gets flaged for a defensive pass interference and it brings up first-and-goal for Penn State from the Iowa 2.

4:24 p.m.:  Clifford finds Parker Washington for 16 yards and Penn State is officially past midfield at the Iowa 32-yard line.

4:23 p.m.:  Penn State’s second offensive drive is going much better than its first as the Nittany Lions near midfield on some nice throws by Clifford.

4:18 p.m.: FIELD GOAL IOWA.  Penn State limits the damage on the early INT and Iowa nails a 34-yard field goal for the first points of the game.  Iowa 3, Penn State 0.

4:17 p.m.:  On third down, Penn State’s defense drops Petras for a sack. Loss of 9 yards on the play and Iowa lines up for the field goal.

4:15 p.m.: INTERCEPTION IOWA.  Iowa brings pressure and with Sean Clifford backed up to his own endzone. He throws a pick and the Hawkeyes take over deep in Penn State territory.

4:13 p.m.:  Penn State’s defense holds and Iowa goes three-and-out on its first drive. Hawkeyes punt it away and Penn State takes over at its own 2-yard line.

4:08 p.m.:  Tyler Goodson peels off a big run for 9 yards and on third-and-1 Iowa QB Spencer Petras takes it for the first down.

4:04 p.m.:  Iowa will start the game with the ball on their 25 as Penn State kicks it away for a touchback.

What channel is Penn State vs. Iowa on today?

Penn State vs. Iowa will air live on Fox starting at 4 p.m. ET. You can stream the game via the Fox Sports App or fuboTV,  which offers a free seven-day trial .

Gus Johnson will man play-by-play duties, and Joel Klatt will serve as the color commentator. Jenny Taft will report from the sidelines.

The game will kick off at 4 p.m. ET from Kinnick Stadium in Iowa City. The last time the two teams faced off at Kinnick Stadium, Penn State won by a final score of 17-12.