Joe Burrow vs. Trevor Lawrence: Inside the NFL rematch of 2019 CFP national championship 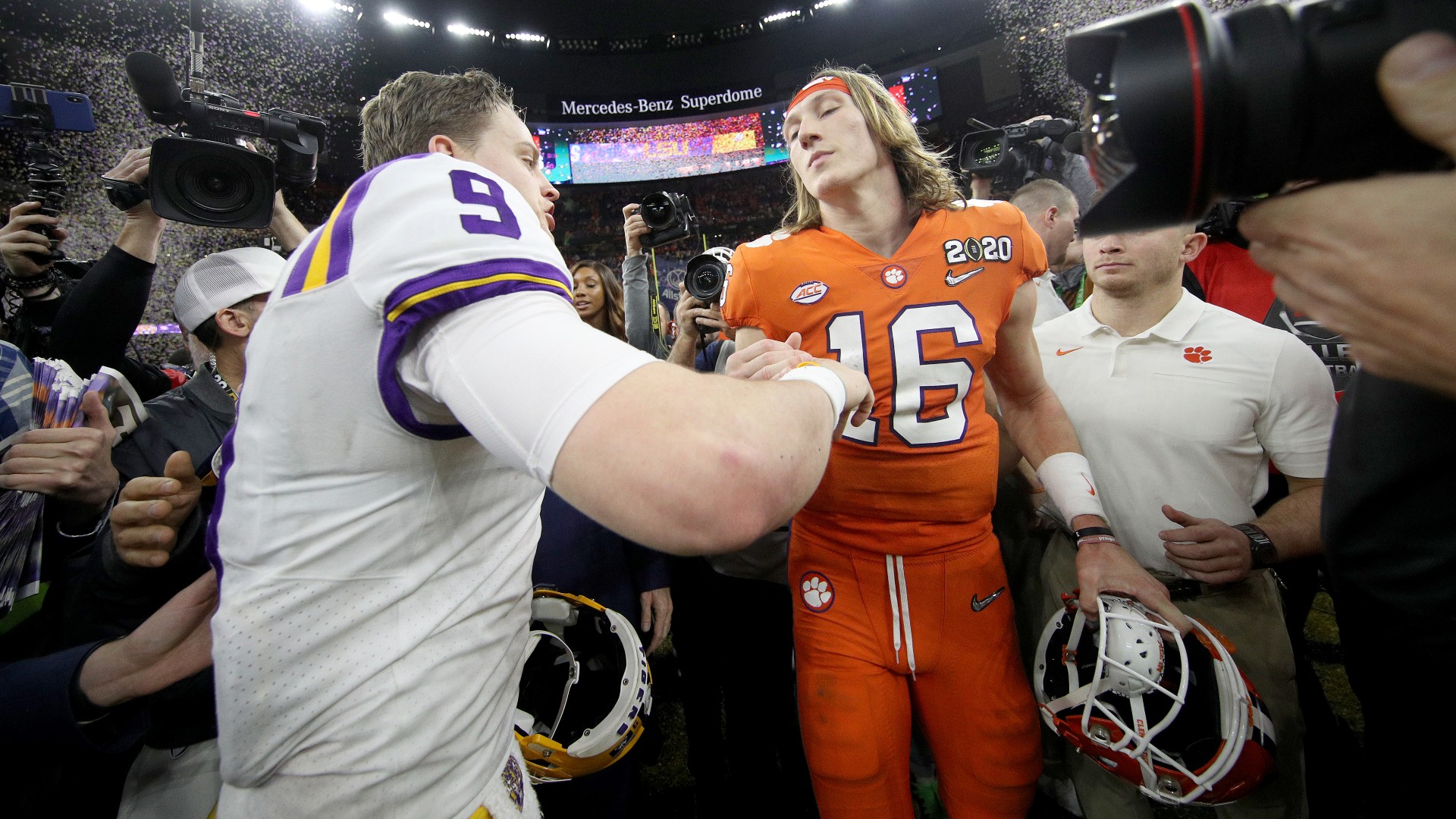 Joe Burrow and Trevor Lawrence were two of the most exciting quarterback prospects coming out of college in recent years.

On “Thursday Night Football,” the two No. 1 overall picks will face each other for the first time on the big stage as Burrow and the Bengals will host Lawrence and the Jaguars in the primetime showdown.

These two players have history both with one another and with the opposing teams. Burrow and Lawrence played each other in the 2019 College Football Playoff National Championship. Burrow will be facing off against his former coach, Urban Meyer, who was at Ohio State before Burrow transferred to LSU. Lawrence will have to watch former teammate Tee Higgins, who hauled in more receiving yards with Lawrence than any other player, catch passes from a different QB.

These two quarterbacks took different paths to this primetime matchup. Let’s take a look at how they reached this point.

The path to becoming first overall picks was very different for the two signal callers.

Coming out of high school, Burrow was a four-star prospect, the No. 210 in the nation in the 2015 class per 247Sports, and committed to the big school in his home state: Ohio State.

Burrow was the backup for the Buckeyes behind J.T. Barrett from 2015 to 2017. After Barrett left, Burrow battled Dwayne Haskins for the starting spot in Columbus, and when it appeared Haskins would get the role, Burrow transferred to LSU.

He started right away in Baton Rouge, completing 57.8 percent of his passes for 2,894 yards with 16 touchdowns and five interceptions. He also rushed 128 times for 399 yards with seven touchdowns. His senior campaign was a historic one, however, as he completed 76.3 percent of his passes for 5,671 yards with 60 touchdown passes and only six interceptions, while rushing 115 times for 368 yards and five touchdowns. His 60 TD passes were the most in a single FBS season, and the result of the 2019 success as a Heisman Trophy to go along with many other accolades. On the way, he led the Tigers to an undefeated season and national championship.

Burrow finished his LSU career with a completion percentage of 68.5 percent with 76 touchdowns, 11 interceptions and 8,565 passing yards, while he rushed 243 times for 767 yards and scored 12 touchdowns.

Lawrence was a five-star prospect, but not just any five-star. He was a near perfect recruit coming out of high school. According to 247Sports, he is the seventh-highest rated recruit since 2000 as he earned nearly unanimous praise as the top player in the 2018 class.

Kelly Bryant was named Clemson’s starting quarterback to begin the 2018 season, but after four games, Lawrence passed him on the depth chart. From there, he was on another planet as the team went undefeated and won the national championship. That season, Lawrence completed 65.2 percent of his passes with 3,280 yards, 30 touchdown passes and four interceptions.

In three seasons at Clemson, Lawrence never lost a regular season game. In 2019, he took them again to the College Football Playoff before falling to Burrow and LSU. The following year, Clemson again reached the CFP, only to be knocked out in the semifinal by Justin Fields and Ohio State.

Though Lawrence never came away with the Heisman Trophy, his talent shined through in the numbers he posted with the Tigers. He finished his career with a completion percentage of 66.6 percent, 10,098 passing yards, 90 touchdown passes and just 17 interceptions. He also rushed 231 times for 943 yards and 18 touchdowns.

Burrow and Lawrence have played one another only once: the 2020 College Football Playoff National Championship.

It was a matchup of the two undefeated Tigers in LSU and Clemson. LSU rolled over Oklahoma in a 63-28 mauling in the semifinal, while Clemson survived a late push by the Buckeyes to win 29-23 and reach the final.

Clemson was the reigning national champion, and while Burrow had led his team to a historic season, Clemson looked like it would be the toughest foe of the season for Burrow.

It turned out to be only the fourth-closest game of the season for LSU, a testament to the high-powered offense it displayed throughout the year. Only Auburn, Alabama and Texas finished within a touchdown of them during the year.

The two teams were tied after the first quarter, but LSU outscored Clemson 21-10 in the second quarter to jump out to a commanding 28-17 lead. Clemson added eight points in the third quarter, but LSU scored two more touchdowns to win 42-25.

Burrow finished the game with an unreal statline of 31-for-49 passing with 463 yards and five touchdown passes. His top receiver — and now Bengals teammate Ja’Marr Chase — caught nine of those passes for 221 yards and two touchdowns. Lawrence went 18-for-37 with 234 yards and lost a fumble, and he added 49 rushing yards and a score on 10 carries.

That game was Burrow’s last in a Tigers uniform. He entered the 2020 NFL Draft as the clear favorite to go first overall, and he did with the Bengals selecting him after finishing 2-14 in the final season with Andy Dalton as the quarterback.

Lawrence had his final season with Clemson in 2020 before he too opted to leave for the NFL. Like Burrow, he was the far and away favorite to be selected first overall. After a dismal 1-15 season, the Jaguars received the pick.

Both quarterbacks immediately began their pro careers as starters. Similarly to Lawrence, Burrow also went through his first three games without a win, though his numbers were far more promising — 64.54 percent completion rate, 821 passing yards, five passing touchdowns, one interception; 16 rushes for 64 yards and a score. His first win came in Week 4 against the Jaguars. Burrow’s first season ended early as he tore his ACL and MCL in Week 11 against Washington. He finished the year with a 65.3 percent completion rate with 2,688 passing yards, 13 touchdowns and five interceptions, while he rushed for 142 yards on 37 carries with three touchdowns.

Burrow looked fully healthy Week 1 when he helped the Bengals beat the Vikings 27-24 with 20-of-27 passes completed for 261 yards and two touchdowns. He struggled the following week against the Bears as he was picked three times and had just a 63.3 percent completion rating, but bounced back in Week 3 with three touchdown passes and a 77.8 percent completion rating with 172 yards. He has been held back in the rushing game a bit, carrying the ball only six times for nine yards.

Lawrence is still looking for that first win. He threw three touchdowns in Week 1, but also had three picks as he completed only 28-of-51 passes for 332 yards. The next week against the Broncos, he had only 118 passing yards with one touchdown and two interceptions. Last Sunday wasn’t much better as he went 22-of-34 for 219 yards with a touchdown and two more picks. He has totalled nine rushes for 46 yards in those three games, and he’s lost two fumbles.