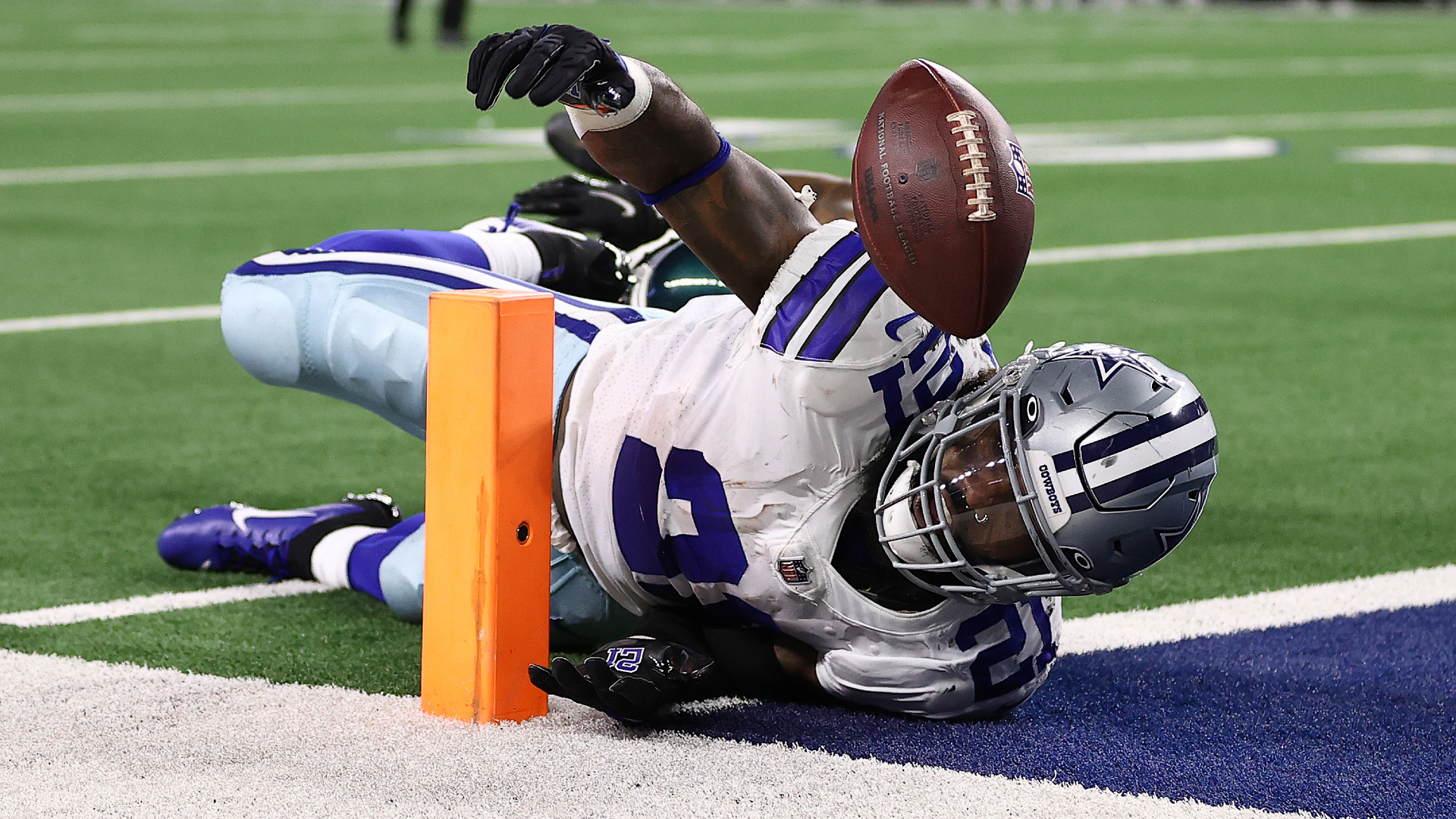 It took just over three minutes for Dallas to get on the scoreboard at home on Monday. The game wasn’t totally over at that point, but it was certainly an indication of what was to come as the Cowboys steamrolled the Eagles 41-21 and moved to 2-1 and atop the NFC East.

It was a dominant offensive performance by the Cowboys, who had nearly 400 yards of offense and saw both Ezekiel Elliott and Dalton Schultz each find the end zone twice.

For as good as the Cowboys were offensively, they were helped by self-inflicted blows on the part of the Eagles, who were penalized 13 times for 86 yards. Philadelphia quarterback Jalen Hurts also threw two interceptions, one of which was returned for a touchdown by cornerback Trevon Diggs.

Philadelphia’s offense was stagnant even without the penalties, as it didn’t reach the red zone until roughly the 8:00 mark in the third quarter, totaled just 64 rushing yards and had just 12 first downs the entire game. It was also the first time the Cowboys scored 40-plus points on a divisional opponent since Week 17 in 2014, when they beat Washington 44-17.

Sporting News tracked live updates and highlights from Cowboys vs. Eagles on “Monday Night Football.” Below are complete results from the NFL Week 3 game:

11:25 p.m.: Dallas takes back over with 46 seconds left and it’ll take the knee and enter into victory formation to put this one away.

11:14 p.m.: TOUCHDOWN EAGLES. The Eagles get back on the board, but it might be too little, too late as Hurts connects with Greg Ward. It’s still a three-score game. Dallas 41, Philadelphia 21.

11:03 p.m.: TOUCHDOWN DALLAS. The Cowboys put this game on ice with 6:56 left as Prescott finds tight end Dalton Schultz for his sixth catch and second touchdown of the game. Dallas 41, Philadelphia 14.

11:01 p.m.: The flag was on the Eagles — their 12th — and the Cowboys decline the penalty to take over at the Philadelphia 31 after the turnover on downs.

10:48 p.m.: TOUCHDOWN COWBOYS. Dak Prescott and Cedrick Wilson connect to put this game further out of reach for the Eagles, as they’re now up three scores with just over 11 minutes left. Cowboys 34, Eagles 14.

10:45 p.m.: Prescott takes a big hit on second down to set up third-and-goal from the 12. The Eagles were offside on the following play, moving Dallas up and keeping it at second down.

10:38 p.m.: The Cowboys are marching and Fletcher Cox is down on the ground for the Eagles with 34 seconds left in the third quarter. It’s second-and-6 for the Cowboys from the Eagles’ 28.

10:30 p.m.: The Cowboys go three-and-out and the Eagles take over at their own 11 yard line after the punt.

10:23 p.m.: TOUCHDOWN PHILADELPHIA. The Eagles are clawing back as Hurts hits Ertz in the end zone to cap off an eight-play, 90-yard drive. Dallas 27, Philadelphia 14.

10:21 p.m.: Hurts hits Zach Ertz and it puts the Eagles in the red zone for the first time.

10:16 p.m.: The Eagles get hit with their eighth penalty of the game and face their sixth third down; this one is third-and-8 from their own 12. Dallas calls a timeout.

10:11 p.m.: Dak Prescott fumbles the ball again, but the Cowboys fall on it and limit the damage.

10 p.m.: TOUCHDOWN DALLAS. The Eagles’ third drive of the half gets stomped out quickly as Hurts gets intercepted for the second time, this one a 59-yard pick-six by Trevon Diggs. Dallas 27, Philadelphia 7.

9:54 p.m.: Some halftime stats: The Cowboys have 19 first downs compared to the Eagles’ three.

Philly also got called seven penalties in the first half for 46 yards, but amassed only 30 rushing yards.

9:43 p.m.: The Cowboys let the clock tick down and head to the locker room up two scores at halftime. The Eagles will receive the kick coming out of the half.

9:40 p.m.: On third-and-24, Hurts dumps it off to Sanders from the Philly 32 and they cross midfield to the Dallas 49. The Eagles call a timeout with 20 seconds left in the half.

9:36 p.m.: Hurts gets sacked right away, and the Eagles’ offensive woes continue. Second-and-21 from the Philly 35, but it’s coming back on an offensive holding penalty.

9:33 p.m.: The call is reversed and the Eagles challenge successfully and keep a timeout. Eagles take over on their 21 after the punt and a holding penalty.

9:29 p.m.: Prescott rolls to his left at full speed and heaves it downfield for a catch by Cedrick Wilson. The Eagles are challenging.

9:24 p.m.: Sanders’ nice run was all for nought as the Eagles go three-and-out and punt it from the Dallas 46. The Cowboys take over at their 6.

9:17 p.m.: TOUCHDOWN DALLAS. Elliott continues to thrash the Eagles’ D-line; he just finds space and runs it at will, this one for the 3-yard touchdown. Dallas 20, Philadelphia 7 with 7:10 left in the first half.

9:14 p.m.: Prescott has loved the tight ends tonight, this time hitting Blake Jarwin for a first down and the Cowboys are once again in the red zone.

9:11 p.m.: The Eagles get hit for another defensive penalty and it’s third and-3. Prescott hits Schultz again for a first down and the Cowboys cross midfield.

9:05 p.m.: Hurts’ pass to Zach Ertz comes up short on third down, so the Eagles punt it away to end the first.

8:59 p.m.: TOUCHDOWN DALLAS. Prescott hits a wide open Dalton Schultz, who didn’t have anyone in the same zip code for an easy score. Dallas 14, Philadelphia 7.

8:56 p.m.: Dallas enters the red zone after a completion to Dalton Schultz for a first down but a false start drives them back 5 yards.

8:52 p.m.: The drive stalls for Philadelphia with the Eagles backed up to their own end zone and they punt it away on fourth-and-5. Dallas takes over at the 50-yard line.

8:49 p.m.: The ruling on the field stands; no touchdown for Dallas and the Eagles take over at their 1.

8:45 p.m.: The Eagles’ defense holds yet again and comes up with a huge stop against the Cowboys to turn it over on downs. Dallas is challenging the call on the field.

8:44 p.m.: The Cowboys have a touchdown erased, at least briefly, as Ezekiel Elliott was ruled down at about the half-yard line. Sets up fourth-and-goal, and the Cowboys will go for it.

8:42 p.m.: Dallas now in great position following a facemask penalty and a Zeke run. Second-and-goal for Dallas from the Philly 4.

8:39 p.m.: This Dallas run goes to Tony Pollard for 11 yards to the Dallas 49 as they near midfield, but they’ll cross midfield on a DPI call on Darius Slay.

8:35 p.m.: The Cowboys are driving so far after giving up the defensive touchdown. They continue to lean on Elliott and his 8 yard run sets up second-and-2 from the Dallas 36.

8:31 p.m.: TOUCHDOWN PHILADELPHIA. Dak Prescott drops back to throw but the ball is stripped and fumbled in the end zone. Fletcher Cox recovers it for the touchdown to answer immediately after the interception. Philadelphia 7, Dallas 7.

8:26 p.m.: DALLAS INTERCEPTION. The Eagles’ first offensive turnover of the year is on a deep shot to Jalen Reagor near the end zone, and Dallas takes over at its own 1-yard line.

8:25 p.m.: Philadelphia’s first play of the game is a big one — a 38-yard pass to tight end Dallas Goedert — and the Eagles are already across midfield.

8:21 p.m.: TOUCHDOWN DALLAS. Ezekiel Elliott punches it in from a yard out, his second straight game with a rushing score. Dallas 7, Philadelphia 0 after a six-play 75-yard drive that took 3:13 off the clock.

8:19 p.m.: Prescott airs it out from the 45 and finds CeeDee Lamb a yard shy of the end zone. It sets up first-and-goal from the Philadelphia 1 for Dallas.

8:19 p.m.: It’s Elliott again, this time for 8 yards and another first down to the Eagles’ 45 across midfield.

8:17 p.m.: Dallas used both Ezekiel Elliott and Tony Pollard in the run game last week. This week it starts with a handoff to Elliott for 5 yards and a first down, and then a pass for 8 yards.

8:15 p.m.: The Eagles have won the toss and deferred. The Cowboys start with the ball in Arlington.

What channel is Cowboys vs. Eagles on today?

The third week of NFL action will wrap up on Monday with ESPN airing its “Monday Night Football” matchup of the Cowboys vs. the Eagles. Steve Levy will be on play-by-play alongside analysts Brian Griese and Louis Reddick. Lisa Salters will be reporting from the sideline, and John Parry will serve as the rules analyst. Coverage of this broadcast will be on ESPN, with the option to stream from either the ESPN app or on fuboTV, which offers a 7-day free trial.

Fans can also watch the “Monday Night Football” matchup on ESPN2, where brothers Peyton and Eli Manning will be back for their MegaCast. That broadcast can also be streamed on ESPN+ or on fuboTV.

In Canada, the game is available on TSN1/5 and RDS2 while TSN3 will have “Monday Night Football” with Peyton and Eli Manning. Fans can also live stream the game on DAZN.

The Cowboys and Eagles are expected to kick off their matchup at 8:15 p.m. ET from AT&T Stadium in Arlington, Texas.

There will be 17 games on Monday nights in 2021, despite the lack of a doubleheader; the season has extended to 17 games over 18 weeks. There will be no “Monday Night Football” during Week 18; all games will be played on Sunday.