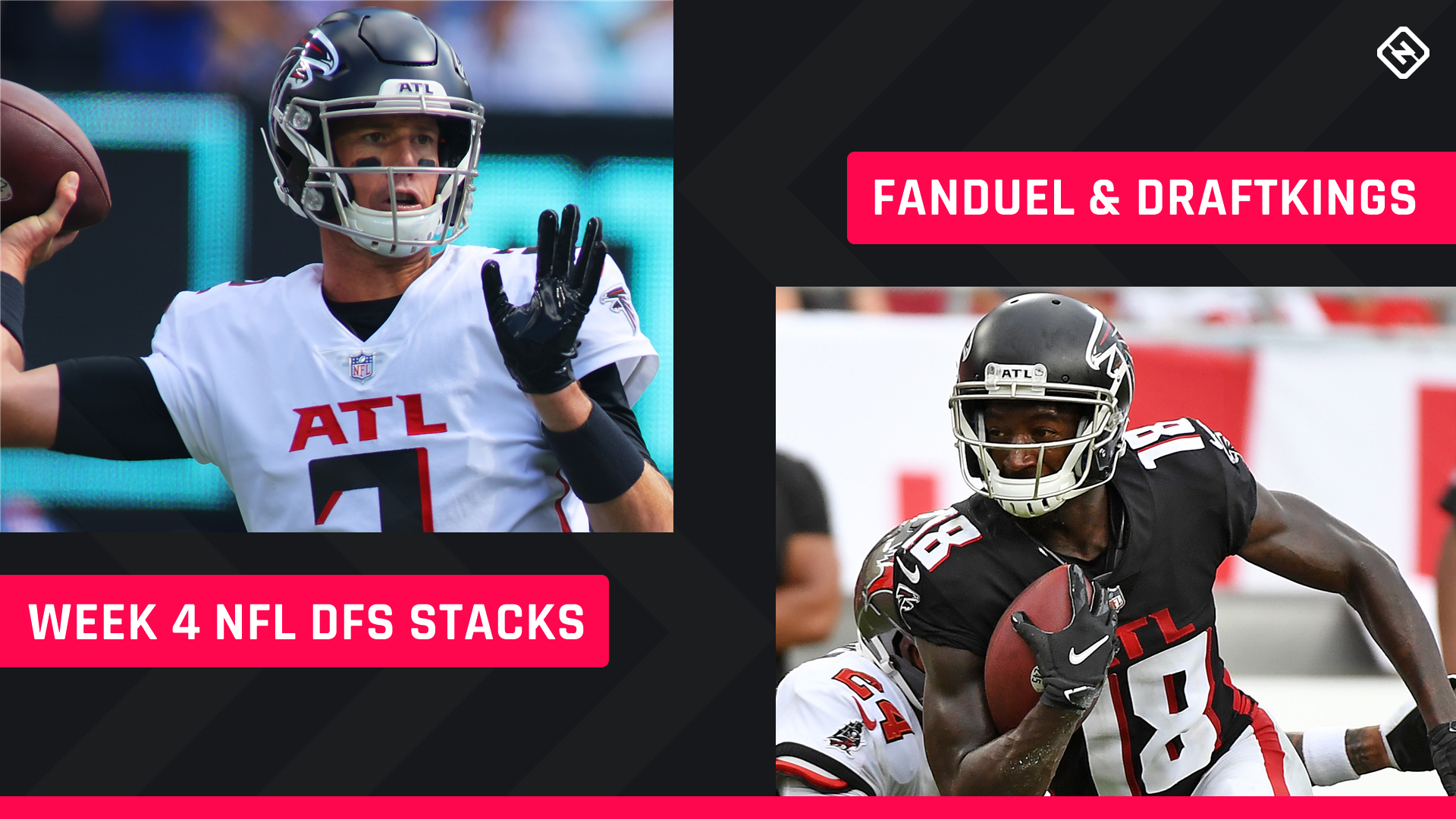 If you’re looking to win in NFL DFS cash games and tournaments, there’s no better way to give yourself a leg up than to stack two or three sets of teammates. Stacking opens up the opportunity to earn double points. If you can correctly dissect the matchups and find value sleepers to pair together, you will create a potential boom opportunity for your DraftKings and FanDuel lineups.

DraftKings and FanDuel have some good stacking options this week. Per usual, DraftKings’ pricing is a bit more variable, so creating three-player stacks is easier on that platform. Making running back and defense stacks is easier on DraftKings, as well, but FanDuel offers many opportunities to create great pass-oriented stacks.

You’ll want to stack a quarterback with either a wide receiver or tight end more often than not. You can pair quarterbacks with two pass-catching weapons in good matchups as well. Running backs and defenses tend to pair well too, though stacking running backs with pass-catchers and quarterbacks can create some interesting, contrarian lineups, as well.

Below are some of the best stacks for DraftKings and FanDuel lineups this week. Week 4 contains a lot of opportunities to stack quarterbacks, and there is one potential contrarian stack that could be intriguing. Be sure to follow our Twitter account @SN_Fantasy to see all of our DFS content heading into kickoff every week.

The Bills finally snapped out of their slow start to the season. They lit up the Washington Football Team in Week 3 to the tune of 43 points. They can be trusted in another good spot against the Texans.

Houston has been better than expected on defense, but they still rank top-10 in both DK and FD points allowed to quarterbacks. They surrendered two rushing touchdowns to Sam Darnold on “Thursday Night Football” in Week 3, so they could be susceptible to Allen’s legs, especially in the red zone.

Considering the boost that quarterback rushing TDs can give a lineup, grabbing Allen is a smart move. So too is getting Diggs and Beasley. They are the top two receivers for the Bills and they combined for 23 targets last game. Granted, neither caught a touchdown last week — they have combined for just one on the season — but they should have a chance to score against the Texans. If not, racking up receptions in the full-point PPR DraftKings lineups will work just fine.

Need another reason for optimism here? Just look at what D.J. Moore did against the Texans last week. He caught eight passes for 126 yards, and Houston couldn’t stop him. They could have similar issues slowing down Diggs.

Dak Prescott didn’t post monster numbers against the Eagles in Week 3, but he racked up 238 passing yards and three touchdowns with ease on “Monday Night Football.” Expect Mahomes and the Chiefs to do the same.

The Chiefs are desperate for a win after stunningly starting the season 1-2. They’ve dropped back-to-back games and will be extra motivated to beat the Eagles given that this is a revenge game of sorts for Andy Reid.

The numbers also line up for Kansas City. Mahomes has averaged 29.7 DK points per game this season and 27.73 FD points. The Eagles just allowed Dalton Schultz to catch six passes for 80 yards and two TDs, so they figure to struggle against Kelce as well.

The only player with a tougher matchup is Hill, as the Eagles have allowed a league-low 294 yards to receivers. That said, they are allowing an average of 12.3 yards per reception, which ranks dead-middle leaguewide. Hill has the speed needed to take advantage of the Eagles’ defense, so he could break a long TD.

This matchup is a rock-solid one, as it could end up being a high-scoring affair. As such, paying up for Mahomes, Hill, and Kelce makes sense. They have high ceilings and high floors; that’s what you’re looking for in cash-game lineups.

This has the makings of a potential monster game for Derrick Henry. The Jets are allowing the third-most FPPG to RBs on DraftKings and the fourth-most on FanDuel. That already made this look like a good matchup on paper, but when you factor in Zach Wilson, it gets even better.

The Jets have struggled immensely with the raw rookie from BYU running the show. Wilson has recorded two touchdowns this season but has logged a whopping seven interceptions through three games. The Titans don’t have the best defense, but they don’t necessarily need one to rattle the rookie.

Tennessee held the Colts to just 16 points last week. They were unable to force any turnovers, but they had a couple of sacks on a hobbled Carson Wentz. The Colts have better offensive talent than the Jets right now, so the Titans should be able to have more success against Wilson and Co.

Sure, trusting a lower-level defense that is the second-highest-priced option on the slate may not sound ideal. However, fading a team that has averaged 6.7 points per game and has given up five sacks and 2.3 turnovers per game seems like a no-brainer. Doing that and running it back with Henry should give you big points, as the Titans should lean on Henry for most of the afternoon if they generate turnovers and get good field position.

Ryan showed some signs of life in the Falcons’ 17-14 win over the Giants. 243 yards and two TDs is nothing to write home about, but he is among the cheapest starting quarterbacks available in DFS this week and he’s in a great matchup.

Washington’s defense was supposed to take the next step toward being elite. That hasn’t happened at all. Instead, they’ve regressed badly and have struggled immensely against quarterbacks. They are allowing 30 DK points and 27.7 FanDuel points per game to the position. Both rank as the most in the NFL.

So, Ryan will get a chance to tee off a bit against a defense that has allowed the fifth-most passing yards through three weeks of NFL action. However, he won’t be highly-owned, as he hasn’t played well this year and there’s still a perception that Washington has a strong defense. That makes Ryan a great play in tournaments.

Stacking Ryan with his two top weapons — Calvin Ridley, who leads the team with 29 targets, and Kyle Pitts, who is tied for second with 17 targets — makes sense. Both have upside and can take advantage of Washington’s poor secondary play. Washington hasn’t been as bad against tight ends, but its linebacker play hasn’t been good. Against a high-level talent like Pitts, they could have a tough game.

Eventually, Arthur Smith will figure out how to get this Falcons offense to hum. Why not take a chance on them this week in a game that could be more of an offensive matchup than people are expecting?

The Browns are facing the Vikings in Week 4. Minnesota has a strong offense but they have allowed 959 passing yards, good for the fourth-most in the NFL, so far this season. Cleveland may have to throw a lot to take advantage of this weakness and to keep pace with Kirk Cousins’ scoring unit.

This stacking approach is a nice one, as it gives us shares of both the Browns’ passing game and their elite running game. While this may look a bit like a contrarian stack, it really isn’t.

Jarvis Landry is still out with a knee injury, and it seems like Hunt might be the No. 2 receiver for the Browns while he heals. Beckham saw nine targets in Cleveland’s win over the Bears to lead the team, but Hunt saw seven. That was the second-most on the team by a wide margin.

So, even if Cleveland falls behind or gets into a shootout, Hunt should get points as a check-down option for Mayfield. That makes him an appealing option, as he’ll have value between the tackles if the Browns get ahead as well.

Mayfield may have just four total TDs on the season, but this is a good opportunity for him to put together a multi-score game. He’s the riskiest part of this stack, but given that he’s a mid-tier value, he’s a worthwhile swing for the fences in tournaments.

Here’s a true contrarian stack that could pay off — if Elijah Mitchell is able to play.

So far this season, the Seahawks have struggled to stop running backs. They have allowed the second-most rushing yards to the position (413) and the most receiving yards (248) to it as well.

At their best, the 49ers are a run-heavy team. They have passed just 53.7 percent of this time this year, good for 25th in the NFL. They will certainly look to get the ball in the hands of their running backs because of Seattle’s weakness in that area. That could mean big deals for both Mitchell and Sermon.

Mitchell is dealing with a shoulder injury, but if he plays, he could go off. He averaged 19 touches for 78.5 total yards in his first two games before missing Week 3. He will probably be the team’s top receiving back if he can suit up, and that gives him PPR upside.

Meanwhile, Sermon wasn’t efficient against the Packers, but he did generate a touchdown and saw 12 touches during the game. If the 49ers want to ease Mitchell back into action, he could truly split carries with his fellow rookie. That would give each an opportunity to pay off as a low-cost starter.

The matchup here is good and spending down at both RB spots could save us money to target other top-tier QBs and WRs. This strategy is a risky one, but if Kyle Shanahan takes advantage of what the Seahawks give him, he should lean on the running game to carry the 49ers.