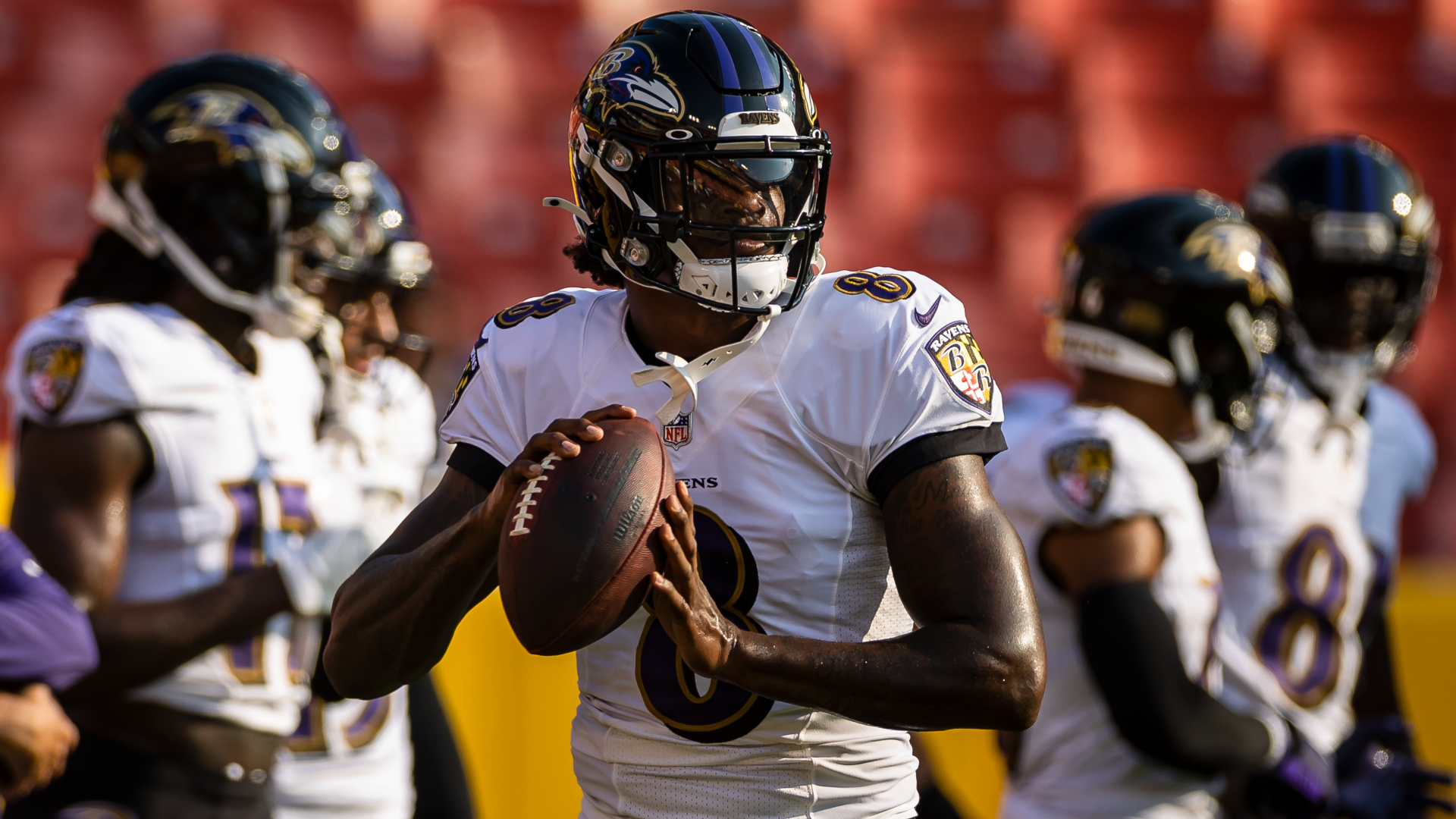 The Ravens and Raiders face off in the first “Monday Night Football” game of the 2021 season Sunday (ESPN, 8:15 p.m. ET) at Allegiant Stadium in Las Vegas, Nevada.

Baltimore, which went 11-5 last season and lost to the Titans in the AFC wild-card round, will be looking to make its fourth straight playoff appearance, something it has not done since it had five straight postseason berths from 2008 to 2012.

The Ravens have been hurt extensively by injuries this preseason, especially at running back. J.K. Dobbins (torn ACL), Gus Edwards (torn ACL) and Justice Hill (torn Achilles) are each out for the season, leading Baltimore to sign Latavius Murray, Trenton Cannon, Le’Veon Bell and Devonta Freeman as replacements.

Las Vegas, which went 8-8 in its third season under coach Jon Gruden, is looking to make its first postseason appearance since 2016. The Raiders overhauled their defense this offseason, firing coordinator Paul Guenther and hiring Gus Bradley, who was the defensive coordinator for the Chargers from 2017 to 2020.

Las Vegas also added 13 new defensive players, looking to improve a unit that allowed the third-most points, forced the third-fewest turnovers (15) and had the fourth-fewest sacks (21) in 2020.

This will be the only Monday Night Football game in Week 1 for the first time since 2005. ESPN will instead have two games during Week 18 in accordance with the league’s new 17-game schedule.

Sporting News is tracking live scoring updates and highlights from Ravens vs. Raiders on “Monday Night Football.” Follow for complete results from the Week 1 NFL game.

11:37 p.m.: Carr escapes pressure and hits Renfrow, who makes Houston and Humphrey miss on a 27-yard gain to the Baltimore 39.

11:29 p.m.: FIELD GOAL, RAIDERS. Carlson is money! Hits it from 55 and leaves only two seconds on the clock! This game’s heading to overtime.

11:25 p.m.: Jackson rolls right but couldn’t find anyone. He takes a 2-yard gainer and lets the clock keep running. Ravens will stop the clock with 42 ticks left on the clock.

11:24 p.m.: Timeout, Raiders (1:29). A first down for Baltimore here guarantees they can kick the game-winning field goal as time expires.

11:21 p.m.: And now Jackson does what he does so well: He takes advantage of Las Vegas covering the changeup and scrambles for 28 yards to the Raiders 37.

11:17 p.m.: Jackson to Patrick Picard for a much-needed first down. Baltimore gets a fresh set of downs from its 35.

11:12 p.m.: Carr connects with Waller for 10 yards to get the penalty yardage back. Second-and-goal from the 10. Jacobs, who has scored the Raiders’ two touchdowns, is on the sideline.

11:09 p.m.: Ruggs gets his first catch of the night in between the zone. Marlon Humphrey was the first corner there. First down from the Ravens 47.

11:06 p.m.: Raiders get the ball back at their 25. Need a touchdown, and have to do it without leaving too much time for Jackson and Co.

11:03 p.m.: Gerald McCoy getting carted off the field. Ngakoue, who’s questionable to return with a hamstring injury, is making the sign of the cross on the sideline.

11 p.m.: Jackson hits Watkins for a 49-yard gain. Had his guy against linebacker Nick Kwiatkoski, a massive mismatch. Ravens knocking on the door from the Las Vegas 8.

10:48 p.m.: Jacobs is hit in the backfield but manages to shake off the tackle from Queen to dive for the first down. Fresh set of downs from the 31.

10:43 p.m.: Carr hits Drake out of the backfield and, to his credit, he gets 21 — not enough for the conversion. Raiders waste the good field position. Ravens take over at their 19 following the punt.

10:43 p.m.: Queen fakes like he’s dropping back into coverage then blitzes at the exact right time to sack Carr for a loss of 18. Devious.

10:40 p.m.: Renfrow takes a quick shot after fielding the punt but manages a 7-yard return to the Las Vegas 41.

10:37 p.m.: Nothing doing for Jackson there; the Raiders swarm him and Maxx Crosby gets credit for the sack for 5 yards. Ravens will punt on fourth-and-13 at the start of the fourth quarter.

10:30 p.m.: TURNOVER ON DOWNS, RAIDERS. Carr throws a yard short to Renfrow on third-and-5 from the Baltimore 18 (good tackle by Humphrey), and then Gruden decides to go for it on fourth down. Jacobs is stopped short after a handoff out of the gun.

10:26 p.m.: Carr attempts to hit Edwards downfield, but misses; Young is called for pass interference, resulting in a 32-yard play, the Raiders’ biggest gain of the game.

10:22 p.m.: Carr takes the play action and scrambles left for 4 yards. Slight tap out of bounds by Jaylon Ferguson, but no problem.

10:17 p.m.: Yannick Ngakoue runs the play down from behind and gets a tackle for loss to make it third-and-5 from the 22.

10:11 p.m.: Raiders don’t even attempt a pass, just give it to Kenyan Drake for a 1-yard rush to give Cole some room.

10:10 p.m.: Carr goes right back to Waller for a 22-yard gain on the underneath route, but it’s negated after Edwards is called for offensive pass interference. It’s third-and-12 now.

10:09 p.m.: Waller took his eyes off the ball and dropped what would have been a sure first down. Raiders face third-and-9 from the 8 now.

10:05 p.m.: Jackson’s third-down attempt is batted and falls incomplete. Timely stop for the Raiders. It looks as if Las Vegas will take over at its 7 after the 49 yard punt from Sam Koch.

10:03 p.m.: Jackson attempts two deep passes on consecutive plays, and both fall incomplete. Trayvon Mullen Jr. is called for illegal hands to the face, however, resulting in a 5-yard penalty and automatic first down. Ravens driving at their 40.

9:45 p.m.: Odafe Oweh sacks Carr for a loss of 2 yards, but Raiders get the timeout off. Here comes the field goal team.

9:44 p.m.: Carr attempts to hit Waller, but it falls incomplete. Luckily for the Raiders, Ravens linebacker Patrick Queen is called for unsportsmanlike penalty on Renfrow. First down at the 14 with 10 seconds left.

9:43 p.m.: Carr attempts to hit Bryan Edwards, but the pass is nearly intercepted by Chris Westry. It’s third-and-3 from the 29 with 17 seconds left.

9:40 p.m.: Good protection by the Raiders and Carr completes the pass to Zay Jones out to the 50 for a first down.

9:37 p.m.: TURNOVER ON DOWNS. K.J. Wright slices through the gap unblocked to hit Latavius Murray for a loss. Raiders take over at their 36.

9:23 p.m.: TOUCHDOWN RAIDERS. Jacobs takes it from 2 yards out for the first touchdown of the season. More importantly it makes the score 14-7 Ravens with 4:14 left in the half.

9:22 p.m.: Clark dragged Renfrow down to avoid the easy touchdown catch. Raiders get the ball first-and-goal at the 2.

9:19 p.m: And there’s the first downfield pass of the drive, a 24-yard connection with Waller up the seam. Raiders are now at the 19.

9:17 p.m.: Carr gets a couple easy targets for a first down out to the 31. Follows that up with a quick hit to Hunter Renfrow for another first down to the Las Vegas 48.

9:08 p.m.: Jackson gets right back to work, completing a 29-yard pass to Marquise Brown out past the Raiders 40.

9:06 p.m.: Silver linings: AJ Cole has been very good punting the ball, averaging 53.3 yards on four attempts. Duvernay fumbles his latest one but recovers it at the Ravens 32.

9:03 p.m.: Carr completes his first completion in eight attempts, a checkdown to Jacobs. It goes for 6 yards to make it third-and-4.

9 p.m.: Raiders defense does its part and gets off the field. Now it’s on Carr, Jacobs and Co. to get something going, this time from their 35.

8:56 p.m.: Nothing doing for the Raiders again. Jacobs gets a 13-yard carry, followed by zero yards on the next three plays. Ravens take over at their 20 after the punt.

8:42 p.m.: Devin Duvernay takes the 62-yard punt and returns it to the Ravens 35. That’s where Baltimore takes over.

8:41 p.m.: Carr’s pass is tipped at the line and is nearly intercepted by Tavon Young. A quick three-and-out brings out the punt team.

8:36 p.m.: Darius Philon sacks Jackson for a loss of 6 yards on third-and-13 to bring up fourth down. After the punt and return, the Raiders take over at their 24.

8:26 p.m.: Ravens take over at their 8. … And there’s the first explosive play for Baltimore: an 18-yard scramble by Lamar Jackson out to the Baltimore 29.

8:23 p.m: Disaster for Las Vegas. Carr attempts to audible but his center didn’t get the message, snapping the ball. Carr has to dive on it for a loss of 15 yards back to the Baltimore 43. Punt ensuing.

8:21 p.m.: Josh Jacobs gets his second rush of the day, a good gain that’s negated by a hold. He limps off the field while lineman Denzelle Good is attended to on the field.

8:18 p.m.: Marcus Mariota replaces Derek Carr on the third-and-1 play and keeps the zone read! He takes it 31 yards to the Baltimore 35.

8:15 p.m: Ravens win the toss but defer; Raiders take over at their 25 after the touchback.

Ravens vs. Raiders will kick off at 8:15 p.m. ET, the same start time for all “Monday Night Football” games during the 2021 NFL season. There is no doubleheader this year, so the Ravens vs. Raiders game will be the only game to air on Monday and will be the last contest played of the week.