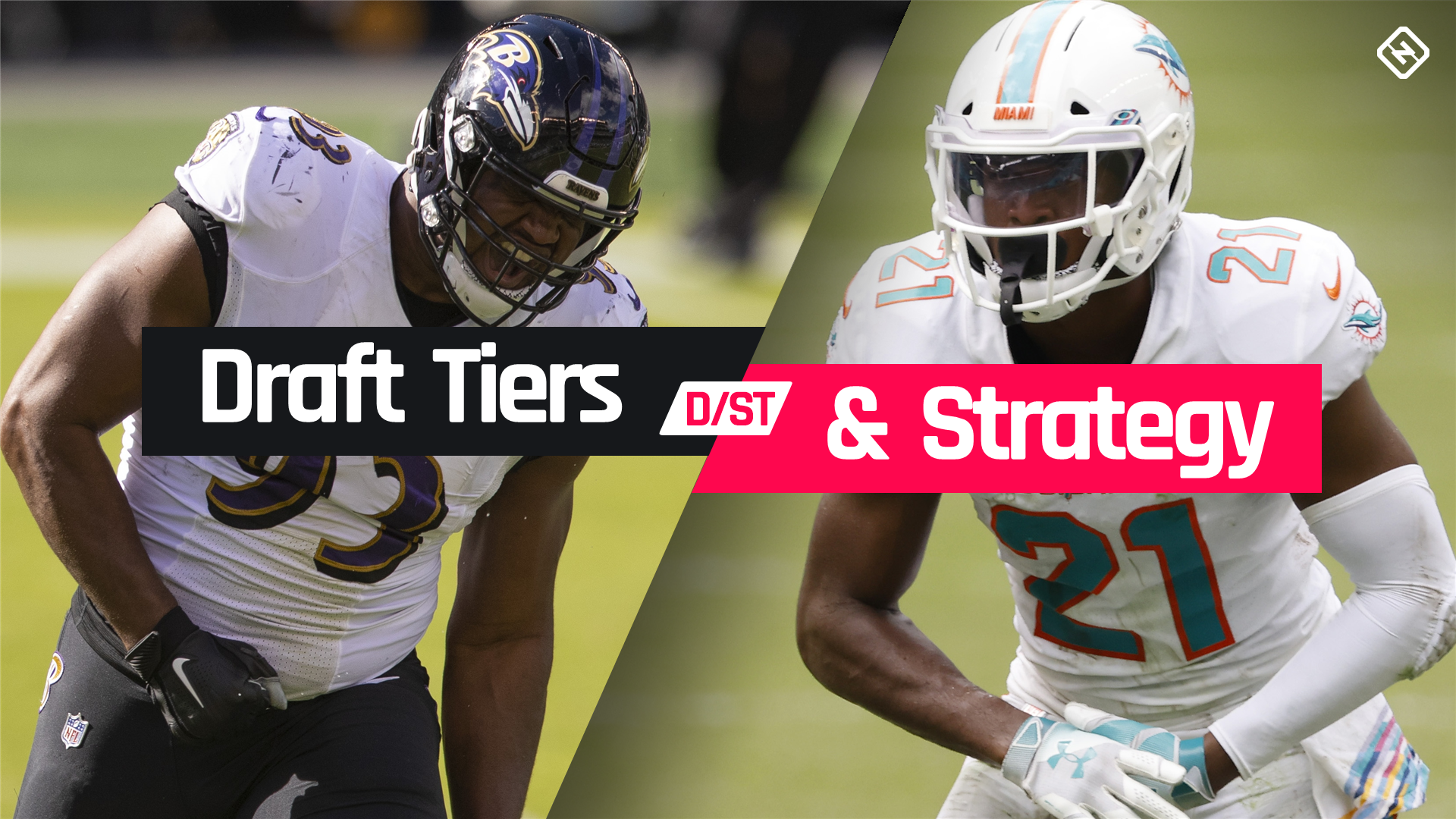 It’s easy to overthink defense in fantasy football drafts. Sure, you want a good one, but you know getting high-upside backups at RB and WR and good starters at QB and TE are more important. Where should D/ST fit in? Given how volatile the position is from year-to-year, the units at the top of the rankings can initially seem like much safer bets, which might cause you to alter your draft strategy. However, after you break down the rankings into tiers, you quickly see there isn’t much difference between the studs and the sleepers.

No matter what your preferred strategy is when it comes to drafting defenses, it’s a almost a certainty that someone in your league has no problem taking a D/ST in the ninth or 10th round. This owner usually figures, “I have all my starters at the other positions, so I will get ‘the best’ defense now.” Once the seal is broken, a few other owners will follow suit relatively shortly thereafter, and the “top tier” defenses will likely be gone by the start of the 12th round.

From there, it will be a slow trickle for the rest of your draft. You might see a defense run in the 13th or 14th round, depending on how many people are waiting, but at that point, there’s really no need to reach. Some owners will take multiple D/STs — which isn’t necessarily a bad thing — but most will just take one. Whether it makes sense to draft two might come down to how many roster spots you have. Shallower leagues, both in terms of teams and roster spots, make it tough to roster two D/STs.

If you plan on streaming D/STs during the season (our preferred strategy), then carrying two out of the gates makes a lot of sense. Streaming defenses is all about playing the matchups, so looking ahead and trying to find D/STs with favorable early-season opponents is smart. Much more on that later.

Like most positions, there isn’t a perfect way to approach D/ST. Any strategy can work if you hit on the right pick, but considering you’re likely to drop your defense at some point during the season — be it because of byes or a bad matchup — it doesn’t make sense to invest too heavily in one. Letting a good one fall to you or simply playing matchups throughout the year will help you maximize value at other positions during your draft.

2021 Fantasy Defense Tiers: Who are the best fantasy football D/STs?

According to FantasyPros, the Rams are the first D/ST off the board, with an ADP of around 132 (11th round in a 12-team league). Chances are in many real drafts, they’ll go higher than that, but either way, the Bucs and Steelers are following about 10-15 picks later. The Ravens are going a few picks after that. Obviously, we’re ranking these defenses a bit differently — and we’re much higher on the Patriots than most other places — but the Rams, Steelers, Bucs, and Ravens will likely be the first four D/STs off the board in your draft, too.

All have major upside thanks to solid pass-rushes and big-play guys on every level. We like the Patriots because of some key offseason additions (Dont’a Hightower, Matt Judon, Kyle Van Noy, Davon Godchaux), their elite secondary, and a favorable early-season schedule, but even we’ll concede the recent track records of the other D/STs in this tier are better. Either way, it will look good on paper to draft any of these teams, but you run into issues right away with two of them.

Will you feel comfortable playing Pittsburgh and Tampa against the high-powered attacks of Buffalo and Dallas, respectively, in Week 1? If not, then ask yourself — is it really worth a 10th- or 11th-round pick on a D/ST that you’ll be benching right out of the gates? If you draft Baltimore, you will probably be sitting it in Week 2 against the Chiefs. At least you can get to Week 3 with the Rams (Tampa) and Week 4 with the Pats (Tampa).

Again, this isn’t to say these defenses are worthless. When the season is over, these Tier-1 D/STs will be near the top of the fantasy rankings, so it’s still worth it to draft them — perhaps even in the 10th or 11th round — but you should also plan on carrying a second defense some weeks. For Pittsburgh and Tampa, that would mean using a second-to-last-round pick on a defense with a favorable Week 1 matchup, but that’s fine. Just know what you’re getting into and plan accordingly.

2021 Fantasy Football Draft Strategy: When you should draft a defense?

Many would have the Patriots and 49ers in this tier, but these are the majority of the teams you’ll see trickling onto fantasy rosters throughout the 12th, 13th, and 14th rounds of your draft. All have upside, but for various reasons, they don’t figure to be quite as dominant as the defenses in the tier above. Some will be big-play dependent (Buffalo, Kansas City, New Orleans) and allow a fair amount of points; others won’t make enough big plays and struggle to produce points against even above-average offenses. It’s likely at least a few will bust, likely because of injuries, but that’s impossible to predict before the season.

It’s tougher to play some of these defenses in unfavorable matchups, which is why reaching for them in a draft is a mistake. You can argue Miami and Washington should be in the tier above (or perhaps in their own tier), but we’d like to see a little more from both before we grant them “elite” status. Miami will be especially vulnerable if they honor star CB Xavien Howard’s trade request. Ultimately, those two should go first, with the rest popping up intermittently as your draft winds down.

One of these units will fall, so if you prefer to wait for D/ST but still get a good one you can ride for much of the year, you should be tracking your opponents and seeing who has already drafted a defense. Once it gets down to you and just a couple others still waiting to fill that slot, you can time your pick based on where you draft in relation to the others. For instance, if you have two picks before either of your competitors has their next one, you can let your preferred D/ST pass through the first turn and grab it on the way back. It’s possible another owner will grab it as a backup (always annoying), but let’s face it — if you’re targeting a D/ST ranked 10th or lower, you really don’t care that much about the position anyway. If you’re dead set on getting, say, New Orleans, then grab them when you can and enjoy the value.

It would not be a surprise to see any of these defenses finish in the top five at the end of the year. A few lucky bounces and an outlier amount of D/ST touchdowns can vault virtually any defense into the top 10, so teams that already have a high likelihood of getting sacks or causing turnovers are that much more likely to break out. All of these units fit that bill, especially after some key offseason pickups (see our D/ST rankings for more in-depth breakdowns).

These defenses aren’t the type you want starting in non-favorable matchups, though — at least not until they prove themselves more. It’s also risky to think carrying two of these D/STs will pay off. The possibility of both having tough matchups is too high. For instance, in Week 4, the Cardinals play the Rams and the Vikings play the Browns. Assuming the Vikings are decent, you can live with them against Cleveland, but it’s not really a plus matchup. You could probably do better streaming the Titans against the Jets or even the Giants against the Saints that week.

So, while it’s not a bad idea to draft one of these units, especially since it means you’re likely the last person to draft a starter, you should invariably target the one with at least the best Week 1 matchup. If you find one with multiple favorable matchups early on (more on that below), then all the better. If you really have a strong feeling about one, like some might with Denver after the addition of several big-play DBs, then by all means grab it, but don’t let that stop you from being on the lookout for better matchups each week.

The D/STs in Tier 4 aren’t that different from Tier 3, honestly, and it’s likely one will emerge as better than we all expect. If you want to try your luck with them, go for it, but just know you shouldn’t have to reach for them in your draft, nor will you have much competition for them on the waiver wire.

It’s tough to count on the defenses in Tier 5 and 6 even as streamers early on, but if they prove themselves to be at least semi-decent (or they face an especially bad, injury-riddled offense), they will have value on a week-to-week basis. That’s yet another reason we often advise against investing heavily in a defense. There is always one available on the waiver wire who has a realistic shot at outproducing your starter, no matter who your starter is.

If you plan on streaming D/STs throughout the season, you should start your scheming right away by drafting one with a favorable early-season schedule.  Please note that what looks like a good/bad matchup in August could change in a hurry once we see teams in action, so we’re primarily basing this on expected QB and offensive line play.

The top-10 defenses included below (Rams, Patriots, Bills, possibly the Saints and 49ers) won’t come at a discount. In fact, if you really want them for this strategy, you would likely need to draft them earlier than they would normally go, which sort of defeats the purpose of streaming D/STs. Nonetheless, we wanted to give you a full picture of the D/ST landscape early in the season. Here’s our list of the D/STs with the best projected early-season matchups so you can draft (and stash) accordingly.