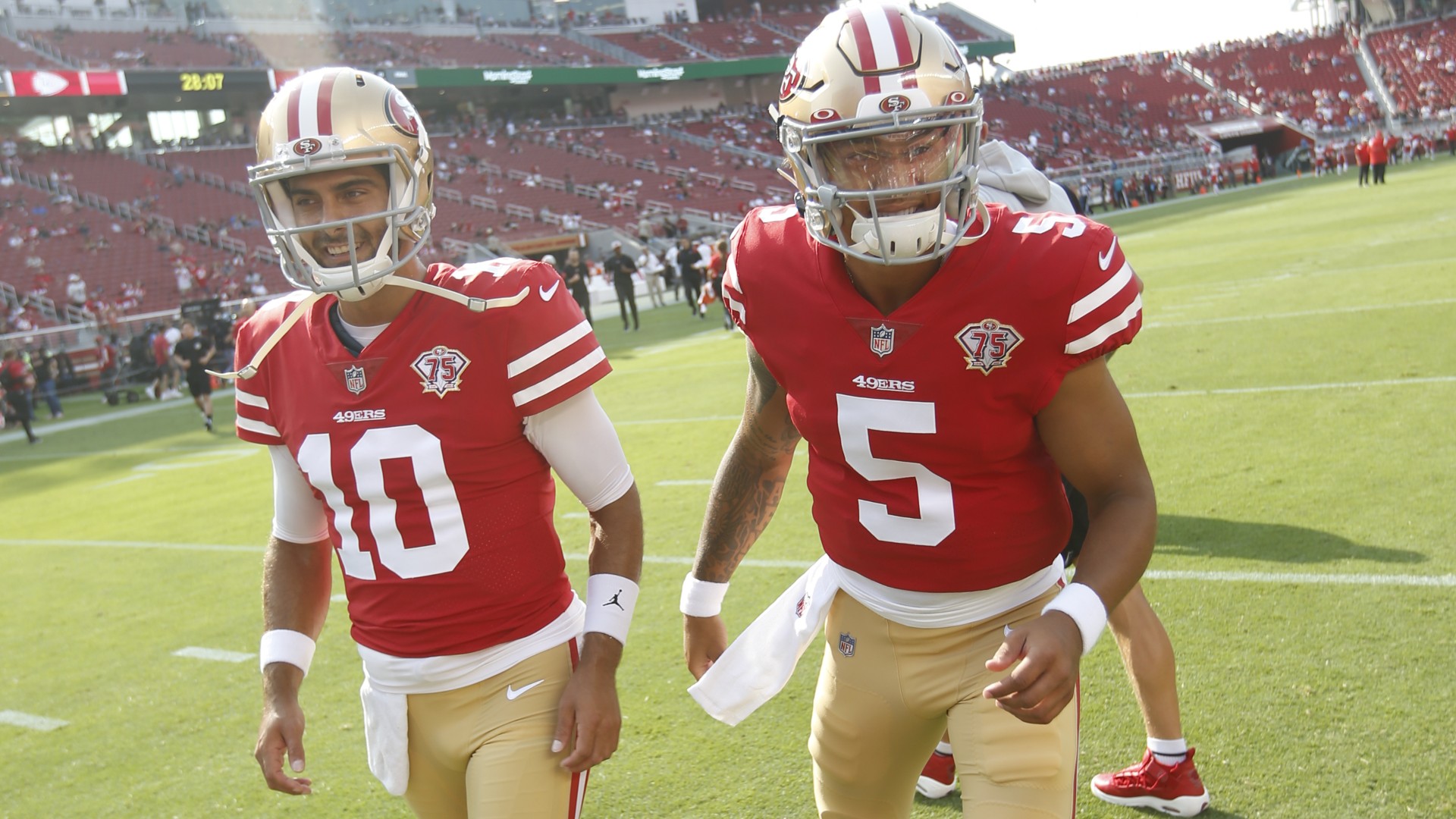 When the 49ers traded up to No. 3 overall in the 2021 NFL Draft, it was clear that they would draft a quarterback. They chose Trey Lance to be their QB of the future.

But is he the quarterback of the present? That has been the question for the 49ers this offseason.

Coach Kyle Shanahan and the team’s brass have been leaning toward starting Jimmy Garoppolo for most of it. The team likes the veteran and has been a fan of his performance in training camp.

“It’s not been as hard as you think,” Shanahan told Football Morning in America’s Peter King when asked when he might start Lance. “In this business, if you’re trying to plan out the next six months and say, ‘Where’s it going?’ that’s a mistake. You can’t do it. What I told Jimmy right when we made the trade is, ‘I don’t know any rookie who can come and beat you out if you’re playing at his best self.’

“I didn’t necessarily think he was there last year at training camp. Then he had the injuries and stuff. But right now, I see him playing well out here. If he can continue to go that way, that’s great for Trey. That’s great for our team. Then Trey can wait till he’s at his best self, which doesn’t happen overnight.”

That said, Lance has also played well during camp and had a brilliant throw in his first preseason game against the Chiefs to put pressure on Garoppolo. And Shanahan recently praised the two for how they’ve competed.

“They’re competing their asses off,” Shanahan said Aug. 19 after a joint practice session with the Chargers. “They’re doing a good job. It’s not about one guy vs. the other guy. It’s about how good can Trey be, how good can Jimmy be?”

After two preseason games, is Garoppolo still the favorite? Or has Lance done enough to prove that he can start right away? Here’s where San Francisco’s quarterback battle stands with one preseason game remaining.

Breaking down Jimmy Garoppolo in 49ers vs. Chargers

Garoppolo played just one series. He had his ups and downs in it.

The good: Garoppolo showed some mobility. He had a 10-yard scramble on a first-and-10 where he navigated the pocket well, decided to run at the right time and slid to avoid being hit.

But there were a couple of blips on the radar as well. On a third-and-4, he threw short of the first-down marker by about a yard. JaMycal Hasty could’ve reached for the first down, but the completion created a fourth-down situation.

While the 49ers converted on that fourth-down opportunity, Garoppolo sputtered a little later. A pass intended for Brandon Aiyuk was intercepted. The ball sailed a bit high, but Aiyuk got his hands on it. While Aiyuk should have caught it, Garoppolo also should have delivered the pass more accurately.

Garoppolo was 3 of 6 for 15 yards and an interception on that lone series. He also had those 10 rushing yards. It was a small sample size, but he didn’t look his best.

MORE: Jimmy G relying on his own experience to help Trey Lance

Breaking down Trey Lance in 49ers vs. Chargers

Early on, it didn’t look as if Lance would fare much better than Garoppolo. His first three drives ended with a punt, an interception and another punt on a three-and-out. The interception wasn’t entirely Lance’s fault — the pass glanced off Mohamed Sanu’s hands — but like Garoppolo’s pick, the throw was high.

Lance finally got in a rhythm running the two-minute drill. He drove the 49ers 75 yards in just 45 seconds and showed a good combination of downfield accuracy, arm strength and mobility. His best throw was a 41-yard strike that hit Trent Sherfield in stride.

A couple plays later, Lance fired a fastball to Sanu for the 49ers’ first score. Lance ran for what appeared to be a game-tying 2-point conversion, but the play was called back because of a holding penalty.

Lance’s up-and-down performance continued into the second half. He started the half by taking a sack and throwing an incompletion. That led to a punt.

On his next drive, he tossed another touchdown on a strong throw to Travis Benjamin. Lance hit Benjamin through a tight window to give the 49ers the lead.

Overall, Lance finished with 8-of-14 passing for 102 yards, two touchdowns and one interception. He also had an 8-yard scramble.

Lance showed excellent arm strength, moved well in the pocket and showed a knack for evading pressure. His biggest issue was inconsistency, but that’s to be expected of a rookie. He has the tools to be a franchise quarterback, but are the 49ers ready to trust him with the starting job?

IYER: Lance needed just one throw to show why the 49ers should start him

Which quarterback has the edge in the 49ers’ QB battle?

Lance heated up after a slow start Sunday, but it’s hard to imagine the 49ers moving away from Garoppolo after two preseason games. Garoppolo may not have looked good in Week 2, but Lance’s play has been uneven as well. The rookie has flashed at times, but Garoppolo has outperformed Lance in one key area: accuracy.

Garoppolo (6 of 9) has completed a far higher percentage of his passes. Lance’s inconsistency has resulted in him completing just 13 of 28 through two games.

While Lance’s other numbers are better than Garoppolo’s, Lance also has seen significantly more action than the veteran, who has played just two drives. So the completion percentage is the most important number, and that’s where Garoppolo has a big edge.

Also, the 49ers have stated all along their preference is to start Garoppolo and give Lance time to develop. GM John Lynch said it again last week.

“Yeah. Jimmy’s done a good job, and it’s likely that he’s lining up Week 1 as our guy, that’s kind of the plan right now,” Lynch told The Athletic’s Tim Kawakami. “Obviously, things can change, but that’s where we’re at right now. He’s been tremendous, and this isn’t anything new, but we’ve talked about it a lot and everyone knows [his record] when he’s been out there. He’s been very effective for us, and I think we’re seeing a better version now. Every day is big, every week is big and it’s more chance for evaluation. But he’s doing a nice job.”

After the 49ers’ 15-10 victory over the Chargers on Sunday, Shanahan indicated that not much has changed since training camp began. He still views Garoppolo as the starter.

But is he ready to officially name Garoppolo the starter?

“No, I’m not making that announcement,” Shanahan said. “Not tonight.”

Still, it would seem that Jimmy G will start against the Lions in Week 1 — if he stays healthy. Lance would need a huge Week 3 performance just to have a chance.